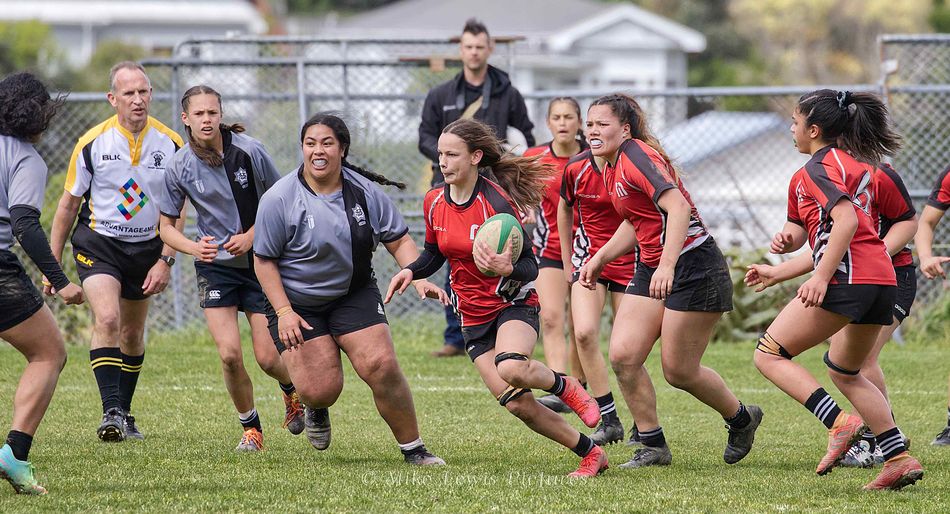 Insanity is a shared experience in 2020 and evidently that reality extended to the Hurricanes Secondary Schoolgirls Final at a windswept Hataitai Park this afternoon.

St Mary’s and Manukura shared the Rex Kerr Cup 10-10 after an epic struggle and a 45-minute second half injury delay.

St Mary’s were more aggressive at the breakdown and were able to bully their way into Manukura territory and loosehead prop Sia Tolova’a-Uele crashed over out wide to make it 5-5.

In the second half Manukura had the wind advantage and anchored themselves inside the St Mary’s 22 for the best part of 15 minutes, and eventually the pressure told and a try was scored out wide on the left wing by Nia Sutherland, putting them ahead 10-5.

Manukura fumbled the kick-off, enabling St Mary’s to attack. They knocked the ball on five metres out from the tryline. There was a scrum, St Mary’s put in a big shove and a Manukura player buckled under the pressure and went down injured and remained down for 45 minutes while an ambulance came to collect her. The injured player was conscious,  moving and talking throughout.

Play resumed from another scrum, Manukura juggled the ball in the in-goal area but hurried an exit play away. The second attempt to clear resulted in a charge-down try to the St Mary’s No. 8 Valini Vaka.

The dropped kick conversion from a handy angle was missed and it remained 10-10.

There was a hotly contested five minutes of play up to fulltime. St Mary’s were spurred on by their small but extremely enthusiastic troupe of roving supporters, but neither themselves or the visitors could break the deadlock.

For the first time, the Rex Kerr Cup is shared. Of note, should there have been a Girls Top 4 this year, it would have been Manukura who progressed to the National finals because they scored the first try of the match.

Manukura No. 8 Kaipo Olsen-Baker was the Player of the Match, and she returns to Wellington on Friday to play the Wellington Pride at Wellington Stadium.

Since 2012, when the Cup Winner advanced to the National Top 4 Finals, the winners have been:

Rex was the first Chairman of the Hurricanes Youth Rugby Council Inc. on its formation in 2006, until retiring from this role in 2012.
Rex is also the former President (and current Patron) of the Rahui Rugby & Sports Club. He is a Life Member of the Hurricanes Youth Rugby Council Inc. and New Zealand Schools Rugby Union Inc. Rex was a strong advocate for the development Girls Rugby within both organisations.

Three St Mary’s and Manukura players have been selected in the upcoming Hurricanes U-18 Development camp in Napier next week. The eight girls players seelcted for this are:

One distressing knee injury after another would be enough to crush most young athletes, but not Ainsleyana Puleiata. The rising netball and sevens star tells Suzanne McFadden how she twice overcame the mental and physical torment – and now the black dress beckons.

Twelve minutes. It’s a timeframe Ainsleyana Puleiata can never wipe from her memory.

Just 12 minutes was all it took to send the promising sports star into a downward spiral. A career-challenging moment the now 20-year-old breaks into tears recalling.

A thrilling young talent from Porirua, excelling in both netball and rugby, Puleiata had just pushed herself through a nine-month comeback from knee surgery, and this was her first real netball game back.

It was early last year, a pre-season match in Auckland with her champion Central Manawa side. A game of little importance.

On court she forgot about her left knee – no painful twinges; no hesitancy.