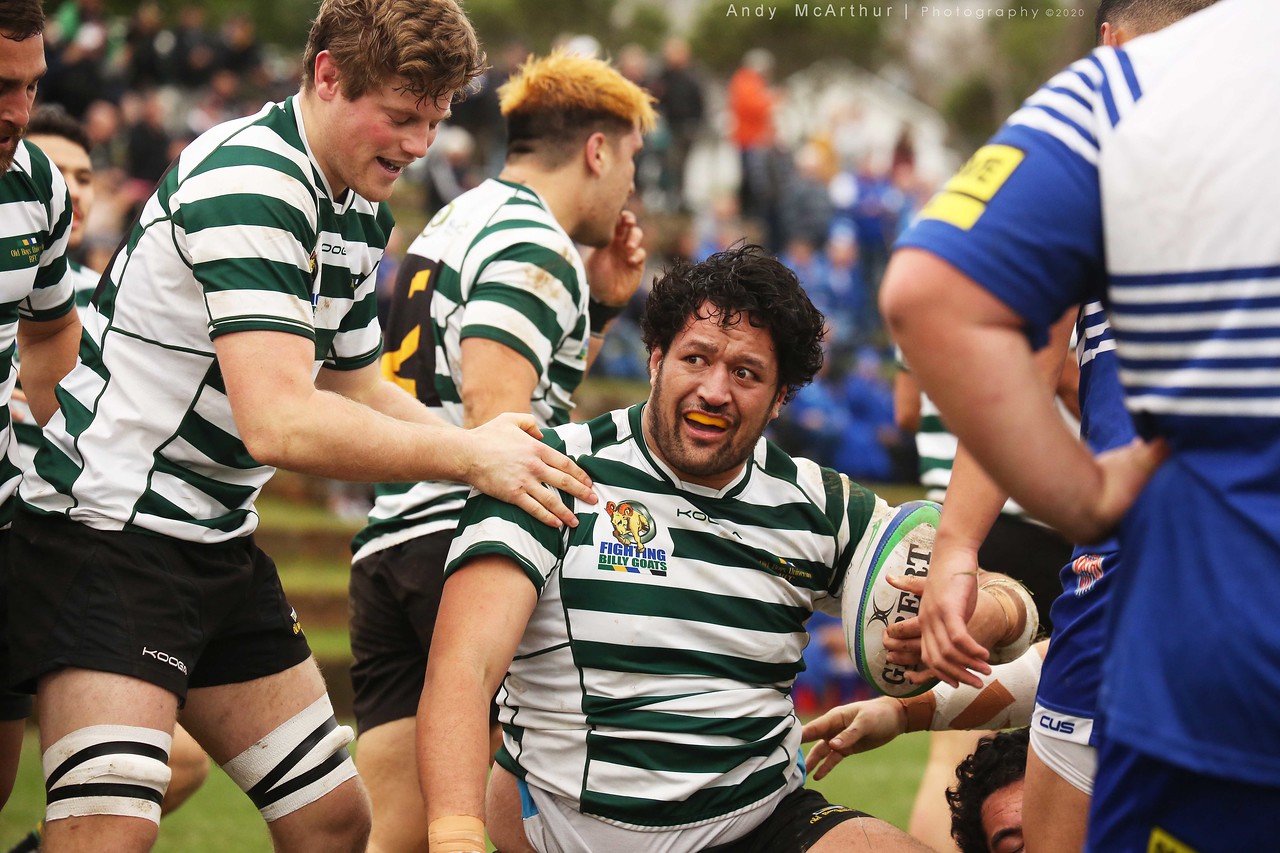 “This has been one of my hardest seasons. The younger guys coming through make you feel even older and the whole COVID disruption was a big challenge. Still, I’ve enjoyed it. Playing every club has allowed me to reconnect with old friends and that’s put into perspective how close the rugby community is and how lucky we’ve been to have a season,” Jonathan Fuimaono reflects ahead of the Jubilee Cup final on Saturday between Old Boys University and Northern United.

Once again, the most capped Billy Goat of all time with 169 appearances is one of the last standing at the business end of the year.

The formidable tighthead prop is seeking a fourth Jubilee Cup title, having started in the 2015, 2017, and 2018 successes by the Billygoats.

Fourth in the Swindale Shield, how did Old Boys University reverse their first-round loss to Marist St Pat’s in the semi-final last Saturday?

“A loss before a knockout game is the biggest motivation. It forces you to adjust your tactics and become more desperate to avoid the hurt of defeat,” Fuimaono responded.

“We had to be smarter with our option taking, take out their effective ball carriers with superior line speed and aggression, take out their turnover merchants by running directly at them. We kicked a lot for territory in the first half and managed to turn pressure into points.”

“MSP played the bottom three clubs before the semis. With due respect to those clubs in a typical Jubilee season, you’d be playing harder games before knockout footy. Perhaps our tougher lead-up games played into our favour.”

A product of St Pat’s Town, Fuimaono made his Premier debut in 2008. His explosive scrummaging and ball-carrying quickly turned him one of the most respected players in the competition. As his stature grew so did the fortunes of his team. In 2013 the students made the Jubilee Cup semi-finals for the first time in a decade, but representative honours remained elusive.

“There was a time where I wanted to be a professional player, but my priorities changed with work and my kids, Luna and Fern. I now enjoy rugby for rugby’s sake. That sounds like a cop-out but for me seeing younger guys like Wes Goosen, Caleb Delany, and Taine Plumtree make the Lions gives me huge satisfaction. They’re living the dream,” Fuimaono said.

“I’m not too big on the social side anymore. Young lads will do what young lads do on their weekend. I’m just here to help and ensure an environment exists where players with ambition can succeed. Our coaches Jamie Williams, Mike Barnes, and Paddy Gough are unbelievable. We’re lucky with the talent we have.”

Fuimaono identified the 2015 Jubilee Cup final as the toughest of the three he has won. OBU beat MSP 30-27.

“It’s the closest result I’ve had, and it was the first win by the club in 50 years. We scraped through the Swindale and got on a special roll,” he recalled.

“Our 2017 team was unbelievable, probably the best team I’ve played in.”

“The 2018 final ended up being a real battle. The expectation to go back to back was huge and we showed a lot of character to get the job done.”

Norths were tamed 37-31 in that 2018 decider and await the students again. Fuimaono was unsurprised by the reigning champions slaughter of Petone in their semi-finals. He’ll mark an old foe in Jerome Va’aai.

“He’s a sneaky prop because he went to Rongotai,” Fuimaono roared with laughter.

“We go back to college, it’s always a tough battle against Jerome. We can’t let Norths get on a roll. We must be smart and accurate.”

The promotion of loosehead Morgan Poi to the Wellington Lions has seen the return of fellow veteran Finbarr Kerr-Newell and a heavy workload for promising rookie Luke Chisholm.

“Chisholm, the man is an athlete. If he can get the scrum under control, he’ll go a long way. He’s wicked around the field and skillful.”

“Finbarr is working in Auckland, flies in Saturday morning, plays the game, has a couple of pints, and goes home. His experience and commitment are invaluable.”

Tiaki Fabish and Josh Gimblett are known as the Sky-Blue brothers because of their Napier Boys’ High School education. The pair have covered lock and loose forward in 2020 impressing Fuimaono with their energy and hustle.

In the backs, Dale Sabbagh has been a steady general and Sam Reid with a dozen tries could win the Best and Fairest award with a noteworthy display. He was second in the most recent update a fortnight ago.

The Jubilee Cup final between Northern United and Old Boys University kicks-off at 2:30 pm this Saturday at the Petone Rec.

Fui and the Goats celebrating their 30-23 win over Petone in the Swindale Shield. PHOTO: Tom Minton.