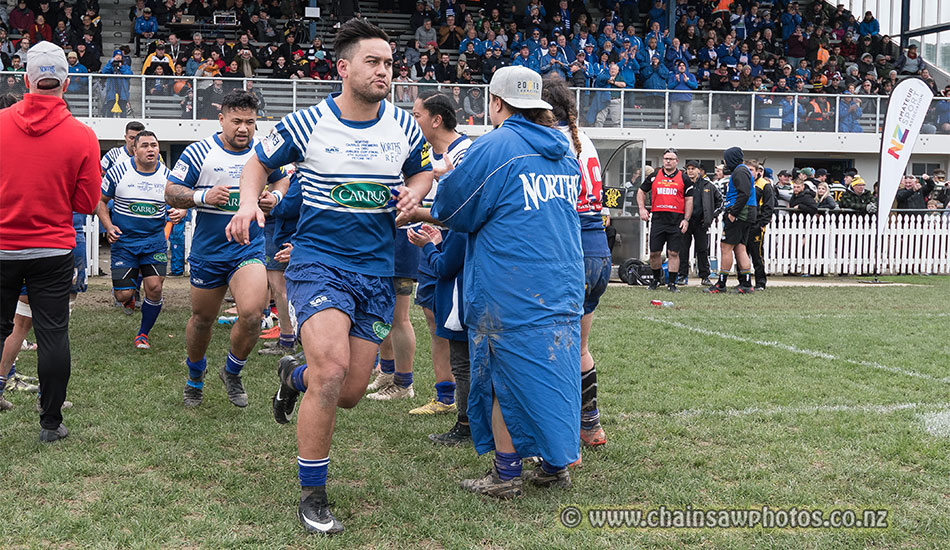 Fullback Johnny Teleaga runs out on to the Petone Rec for the start of the 2018 Jubilee Final. On Saturday he plays his 100th match for Norths in this year’s final.

The headline in the Dominon Post after Northern United’s breakthrough Jubilee Cup win in 2004 referred to the club as the sleeping giant that had arisen.

Following the amalgamation of the Porirua and Titahi Bay clubs a decade and a half earlier, the Norths Colts team won the first division John E. Kelly Cup title for the first time in 2001 and many of those players went on to win the Swindale Shield in 2003 and the Jubilee title the following year. They won the Jubilee Cup in 2006 and 2008 and then 2010, the zenith of their achievements.

The 2010 Norths Premiers scored 546 points in winning the Swindale Shield with three games in hand and amassed 53 competition points out of a possible 55,  They weren’t so dominant in the Jubilee Cup round-robin, losing to Poneke 15-17 on a Kilbirnie Park mud-pie and drawing with both HOBM and, surprisingly, Upper Hutt; but hit top-gear again when it mattered beating HOBM 38-13 in the semi-final and Poneke 24-5 in what was the last final played at Wellington Stadium. In 20 matches they scored 123 tries and 819 points.

Norths defended the Swindale Shield in 2011 and were on target to retain the Jubilee Cup, before being blown away – quite literally – by Oriental-Rongotai in that year’s final.

Ories won that final 40-22 in a remarkable final that started in calm, sunny conditions but then turned wet, wild and windy.

The Norths trophy cabinet was often bare over the next several seasons, as other clubs such as Tawa and their opponent for this coming Saturday, Old Boys University, rose to prominence. In this time they lost their talisman player Jerry Collins and many of their former players either retired or moved overseas for professional contracts.

In 2017, Norths won seven of their first eight games to ensure a place in the Jubilee Cup for the first time since 2012. However, they dropped away, losing seven of their last 12 games.

But in 2018 they were back. They won 11 of 13 games, scoring 516 points and conceding 342, to win the Swindale Shield for the first time in eight seasons. OBU were second equal with HOBM.

They then reached the Jubilee Cup final for the first time in eight years but got stage fright in the first half as OBU raced to a 25-3 halftime lead. Norths came roaring back in the second half but ran out of time and OBU hung on to win 37-31.

In 2019, Norths were second to Hutt Old Boys Marist in the first round, before qualifying third for the Jubilee Cup semi-finals and knocking over Tawa away 18-17 to qualify for the final. In a tough final last year, Norths pulled away to beat plucky Wainuiomata 25-16 and once more be crowned champions.

Should they go back-to-back this coming Saturday against OBU, their comeback to the top of the tree in Wellington club rugby will be complete.

Having enjoyed two golden eras in their three-decade existence. How does their current run compare with the great teams of the past?

Johnny Teleaga celebrates his 100th game on Saturday. He has scored 36 tries and in 2010 scored three tries when the Porirua Vikings beat Wainuiomata in the local league decider.

Campbell Woodmass will celebrate his 50th game on Saturday. He won a Gallaher Shield with Ponsonby in 2018.

Kienan Higgins was presented with his blazer for 35 premier appearances following the Petone Swindale Shield clash. His first eight tries for Norths were all scored in pairs.

Losi Filipo has scored 22 tries in 22 games for Norths.

Bruce Kauika-Petersen is named on the bench as hooker for the Wellington Lions match against Bay of Plenty on Friday night. He is currently second on the best and fairest standings.

Parekua Lalaga has played 131 games for Norths and is the most experienced player in the roster – in fact he is the only survivor from the 2010 final and the only player on either side to have played a final on Wellington Stadium.

Axemen take down MSP, while HOBM and Poneke win three in a row