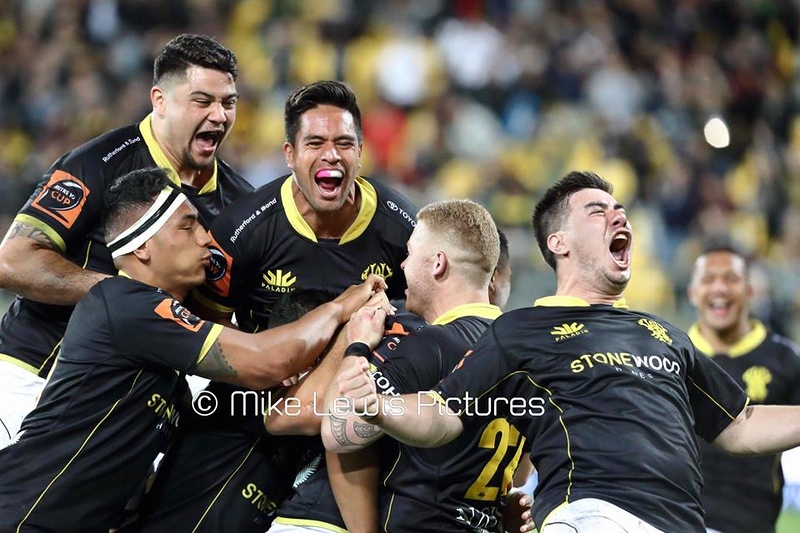 The Lions celebrate their Championship 57-45 win over the BoP Steamers in 2017.

Following Sunday’s opening win of the season against Auckland for the Fred Lucas Cup, the Wellington Lions have a short turnaround this week before hosting the Bay of Plenty Steamers at Wellington Stadium on Friday night.

In association with Peter Marriott, here are Club Rugby’s facts and figures heading into the game:

The two sides have played 33 NPC matches since 1976, Wellington has won 26, BOP five, and there have been two draws.

39 or more points will bring up 1000 for Wellington against BOP. By happy coincidence Wellington scored 39 points against Auckland last week and have now aggregated 1001 points in all NPC matches against them.

Wellington has won the last seven matches in succession against BOP. The last time the Steamers beat the Lions was in 2011 when they prevailed 32-0 under sunny skies up the road at Mt Maunganui.

Wellington won all six of their matches played at home in 2019. They are going for a seventh straight victory.

The last meeting between Wellington and BOP was on 7 September 2019, at Rotorua, where Wellington won a close one 16-15. BOP led 10-9 at halftime. There was no more scoring until the 56th minute when Peter Umaga-Jensen crossed for a try which Jackson Garden-Bachop converted. With 13 minutes remaining Emoni Narawa scored for BOP and a conversion would have put them ahead by one point. Dan Hollinshead missed the conversion and there was no further change to the score.

The last time they played at Wellington was on 27 October 2017 when Wellington won the Final 59-45 to gain promotion back to Premiership level. Wellington scored nine tries and BOP seven in that match.

The Lions won the final in extra time, after scores were locked at 40-40 after the end of 80 minutes.

The lead changed hands twice before halftime as the Lions took a 20-14 lead into the first turnaround.It was more of the same in the second half, with scores advancing to 33-33, before Wellington scored through then All Blacks wing Julian Savea and BoP answered with a try of their own. Then Lions first five-eighth Jackson Garden-Bachop missed a penalty that would have locked it up there and then. The game went to extra time and Wellington pulled clear to win.

This final win was Wellington’s first NPC title since 2000, while the last time BoP had been in a final before then was also in 2000 when they contested the Division 2 decider.

BOP has the dubious honour of being one of only two sides which have kept Wellington scoreless in a NPC match. The first was Canterbury (17-0) at Christchurch in 1977 and BOP (32-0) did so at Mt Maunganui in 2011.

BOP has just come off a close second round win (17-14) against Southland after the score was tied 14-14 at halftime.

There have also always been strong connections between the sides in these matches, and BoP’s 23-man side that took the field last start against Southland contained five players with Wellington club rugby experience, Chase Tiatia being the most prominent.

Bay of Plenty had been the inagural NPC Division 1 winners in 1976. That season’s first NPC match between the two unions was drawn 18-18.

For many seasons after that, Wellington either won their matches the two sides never met as the Steamers spent most of the 1990s playing in the old NPC second division.

Overall, Wellington and BoP have met 41 times in first-class rugby between 1912 and 2019, with Wellington winning 33, BoP five and there have been five draws.

Friday’s match kicks off at 7.05pm. See the full draw and standings HERE

The Wellington Lions squad to face Bay of Plenty is: