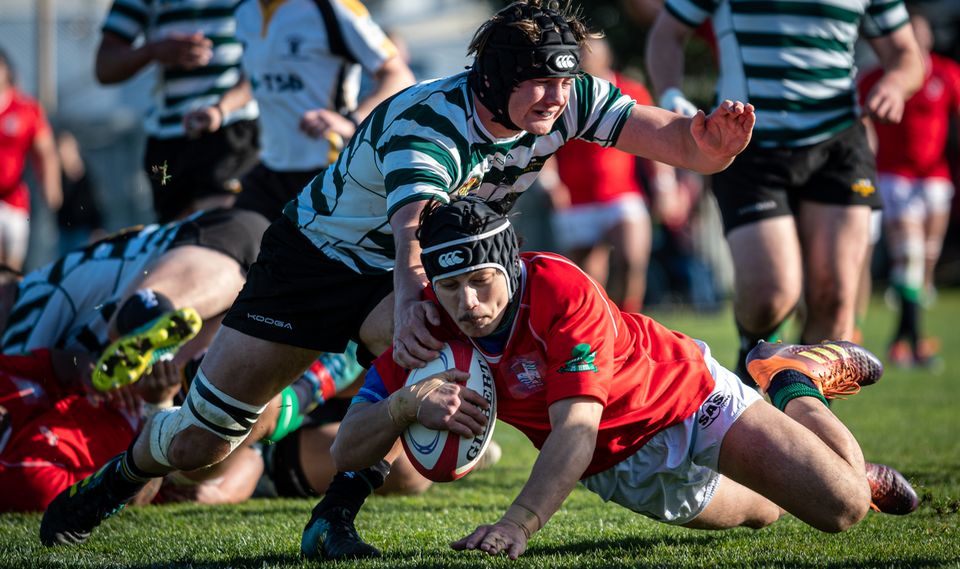 Wing Willie Schutz scored a key second half try for Marist St Pat’s, but they were beaten 28-32 by Old Boys University in their Jubilee Cup semi-final. PHOTO: Tom Minton.

It is Northern United versus Old Boys University.

The two teams will meet in next week’s Jubilee Cup final at the Petone Rec after beating the home teams today at the same venue and at Evans Bay Park in today’s semi-finals.

There was also drama in the Premier 2 Hardham Cup semi-finals, with eighth seed Wainuiomata knocking over fifth placed qualifier Tawa 19-11 at Lyndhurst Park and Hutt Old Boys Marist getting up late to beat Oriental-Rongotai 27-21 at the Hutt Rec.

In perhaps the closest semi-final of the four played in the top grade, Ories held a 21-20 lead heading into the dying embers, only for HOBM to make the most of one of their few second half chances to score and win the game.

The Hardham Cup final will be between Hutt Old Boys Marist and Wainuiomata.

Norths will defend the Jubilee Cup against Old Boys University next Saturday following their half century win over Petone.

The halftime score of 41-3 says all you need to know about the match. Norths were imperious and everything that could go wrong, did go wrong for Petone. The hosts lost two props as the contest was reduced to uncontested scrums early in the second half. Additionally, flanker Josh Southall hobbled off with his troublesome knee flaring up again.

The experienced Norths pack was always going to play with more hunger and accuracy than their lacklustre display last Saturday, but the sheer explosiveness of their assault settled the outcome within 20 minutes.

Petone’s Logan Henry kicked the first penalty before the blue tide erupted. First-five Sam Clarke ran amok had and two tries within 15 minutes while Connor Garden-Bachop repeated his semi-final try from last year with a flying burst down the right wing. Unfortunately, the Lions speedster left the field injured.

Norths prop Gerrard Faitotoa was a bully and flankers Parekura Lalaga and Bruce Kauika-Petersen effectively backs as Clarke and then Kienan Higgins with two tries kept the scoreboard soaring. Locks Tana Salzmann and Waylon Baker, the later scoring a try, were disruptive in the lineout.

The second half allowed Norths to empty the bench as their intensity dropped slightly. To their credit Petone played with commendable spirit. Wing Willie Fine was unstoppable with two blindside bursts while Logan Henry, Jarrod Hrstich emptied the tank.

Petone contested their first semi-final in a decade but have lost six in a row since last winning the Jubilee Cup in 2005. Norths are 10-3 in semis and have won the Jubilee Cup five times.

A brutal match between the rival town-based teams was characterised by big defence, many stoppages and a high injury toll –  which saw MSP lose both starting first and second five eighths Aidan Morgan and James Proctor by half time. OBU won the game, on the scoreboard at least, with a furious first half assault.

Led by warhorse prop Jonathon Fuimaono and a committed support cast, including new Wellington Lions lock Taine Plumtree, OBU showed hunger from the opening whistle. After a bruising opening exchange that saw both sides trade penalties, OBU opened their try scoring account with a well-taken try from a penalty and lineout drive in a corner, second five eighth Izzy Foai crossing the whitewash.

Proctor replied with a 41-metre penalty for the home side in the difficult cross-wind conditions and OBU led 8-6 after about 20 minutes.

The Goats then struck with the first of two decisive tries from kicks in play. Another long build-up led to first five eighth Dale Sabbagh putting in a cross-kick for right wing Reece Plumtree to collect and score off. Sabbagh nailed the sideline conversion.

OBU’s earlier try scorer Foai was sinbinned and MSP got back in the game but failed to break through. MSP’s lock Charlie Gubb was sinbinned as well, and OBU held their 15-6 lead heading towards half time. OBU then scored their third try when they overpowered a MSP defensive scrum and forced halfback Ken Kapeli into throwing a wild pass which was pounced upon by second five Harkin who scored. OBU were well in front a 22-6.

MSP scored their first try after a two-minute build-up to trail 22-13 at half time. However, just before half time both inside backs Morgan and Proctor went down injured, not to return in the second half, forcing a rejigged backline.

Both teams set the pattern for a battle of attrition that carried on throughout the second half. For a long time the semi-final remained on tenterhooks and got testy at times, more so after Andrew Wells kicked MSP’s fourth penalty to close the deficit to 22-16. OBU’s riposte was to score their second decisive try from a kick in play when halfback Kyle Preston put up a well weighted box kick and flying fullback Sam Reid scooped up the bouncing ball and sprinted clear to the try line. The conversion made it 29-16.

MSP upped their intensity and after another long, furious build-up inside the 22. They were held up over the line but from the next play No 8 Keelan Whitman freed up centre Isaia Petelo who handed a try to wing Willie Schutz. Wells guided the conversion through the poles and it was now 29-23 with about 10 minutes to play.

OBU scored again, through a long-range penalty to Sabbagh, making it 32-23. Needing to score twice, MSP failed to break through until the very end, scoring a try as the last play of the game to after sustained pressure and a cross kick across the face of the tryline by replacement halfback Ben Stephens close the gap to 32-28.

Both sides emptied their tanks and OBU’s physio could well be the busiest person in their club over the next week. It was heartbreak for MSP who won the first round but have bowed out beaten semi-finalists.

They’ve been the form teams all season and Norths and MSP will meet in next Saturday’s Ed Chaney Cup final after both winning their major Premier Reserve semi-finals today. Harper Lock winners Norths left it late against a fired-up Petone side that they beat handily a week ago, scoring the winner in referee’s time to edge the Villagers 29-22 while at neutral Hataitai Park MSP eased past HOBM 49-20.

Three points was the margin in both HD Morgan Memorial semi-finals.

At Lyndhurst Park OBU got up over Tawa 33-30, while at Kilbirnie Park home side Poneke tipped eastern suburbs rivals Ories 25-22. The 9th-12th final will be played between Stokes Valley, who beat Pare-Plim 37-29 at Delaney Park, and Johnsonville after the Hawks won by walkover with Avalon not able to front a team, and in the 13th/14th playoff Wainuiomata finally got into the winners column for the year by beating the Petone Brotherhood

Contrasting scorelines in the two Division 1 John E Kelly Memorial semi-finals. A week after they played out a 27-25 scoreline at Ian Galloway Park, OBU Green and Tawa met again with the same outcome, only this time with an 18-10 scoreline to the Goats.

The other semi-final was a high-octane affair between Norths Blue and Petone on the #2 field at Porirua Park, with the home team prevailing 45-27. Norths used speed to great effect in the opening 40 with four long-range strikes and Misi Faimalo pulling the strings. However the Village youngsters simply refused to go away with Rory Woollett their conductor and scoring a pair of well-taken tries from set-piece along with two penalties to trail 26-20 at the break. However Norths would score inside 30 seconds of the resumption after a horror moment for the Petone fullback, and although Petone would respond then the loss of Woollet who eventually succumbed to a knee knock he picked up in the first half proved too much to overcome as Norths pulled away with two further tries.

The Division 2 Vic Calcinai Memorial final will be between HOBM and OBU Black. The Eagles saw off the Upper Hutt Rams 26-7, while in the battle of the B squads OBU edged out Norths White 26-22.

The last round of the College Premiership produced no surprises and sorted out the order for all but Silverstream and Scots who will meet in next Sunday’s Premiership decider. Those two warmed up with comfortable wins; Silverstream beat Tawa 64-7, while Scots won 73-14 over St Bernard’s. In the other matches Town steamrolled Rongotai 62-7 to claim third in the standings while the margins were closer elsewhere with Wellington College signing off by beating Aotea 38-33, and Wairarapa came out on top over Mana 33-23.

In Premier 2 the Silverstream 2nds booked their place in that final with a 50-10 win over Paraparaumu, and they’ll take on Upper Hutt, who had the bye, next Saturday. Hutt International finished third after beating Kapiti 28-19, the Town 2nds beat Wainuiomata 18-10, and Porirua won by default over Wellington College.

In the five grade finals played today Wellington College defied being the fourth qualifier to win the Under 15 Division 1 title beating Silverstream 45-32, while Paraparaumu claimed the Division 2 crown beating Scots 27-15. Scots did claim the Premier 3 title over Naenae by 51-20, with the St Bernard’s 2nd XV taking Premier 4 honours 36-17 over their Tawa counterparts. And finally, the Under 55kg crown went to Hutt International who beat Paraparaumu 31-15.

Wellington College retained the Father Gus Hill Cup in winning the U15 final.

Stream, the home team, set the standard early using their size superiority to take an early lead. Wellington College showed gutsy resolve to stop the Stream forward’s barracking runs. The game would be won with the guile of WC’s first five Stanley Solomon. The latter helped craft the win with his tactical kicking, line breaks and smooth distribution of the ball. Chris Wells, WC Coach, was praiseworthy of his boys especially given they also played midweek against St Pat’s Town. Momentum was on their side. They were brave in the contact and Solomon’s 35 points was something special.

In a representative match today at the Hutt Rec, the Wellington Pride slew the Hawke’s Bay Tuis 67-17, to register their second bonus point win of the Farah Palmer Cup Women’s NPC competition.