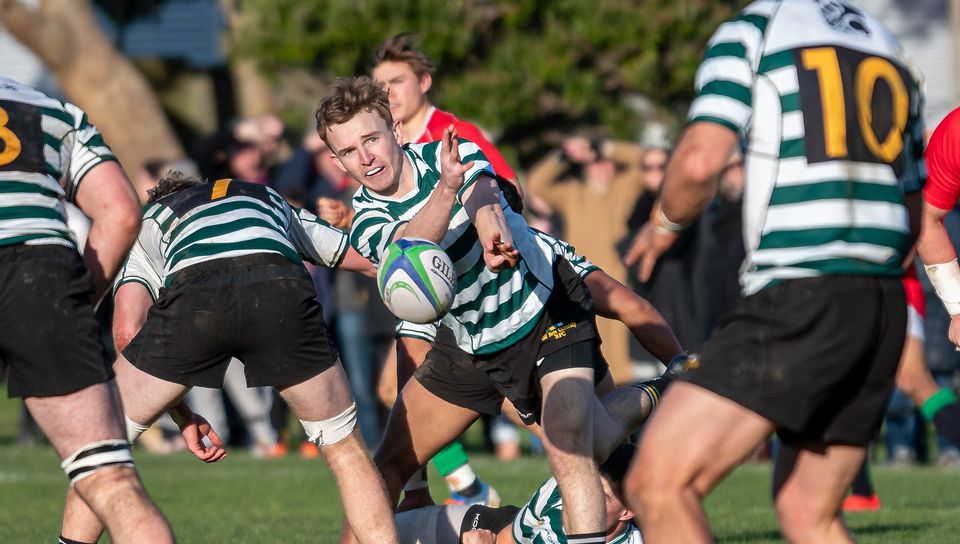 It is 2013 when a diminutive and raucously outspoken halfback captured the attention of Dave Loveridge at an Old Boys University Colts practice.

“Look at this unit,” Trapper quipped at 18-year-old Matt Fowler. The name stuck.

“It’s an honour to be bestowed my nickname from Dave who boasts one of the great rugby nicknames. If you thought I was baby-faced now, you should have seen me then,” Fowler reminisced.

Two Jubilee Cup wins, 57 premier games, and a $95,000 student loan later and the baby has proven there is plenty of bite to his bark.

The law clerk at Chapman Tripp shapes as a key figure in the Billygoats’ attempt to win a fourth Jubilee Cup in six years.

OBU was leading the Swindale Shield after 10 rounds but slipped to fourth following narrow defeats to Hutt Old Boys Marist and Oriental Rongotai. With 10 players selected for representative duty, the students have called upon 29 players in the last three games alone.  How do the Goats construct a game plan with so much change in personnel?

“The short answer is that it’s difficult,” Fowler responded.

“On Tuesday we’ll review the game from the weekend, make small changes to our strategy and then review the opposition. As a University club we’re more practical than most because of the student lifestyle. We have a couple of key game drivers and we’ll make sure they’re across all their information before Saturday.”

Former Wellington Lions and Tongan halfback Tomasi Palu was a long-time game driver at OBU. Unfortunately, a sudden injury caused his retirement making Fowler the most senior nine at the club.

“Tomasi wasn’t only responsible for a lot of my own personal development but he showed me how much influence the halfback can have on the game as a whole,” Fowler said.

“The communication side of things, establishing the link between the forwards and the first-five, the whole nine yards.”

“This year we’ve been lucky to pick up Kyle Preston and he’s an outstanding young halfback. He’s got great skills and the best box I’ve seen in the region. Depending on the opposition we share starts but understand we both get minutes. We bring different skills which suits different conditions and teams.”

Fowler is a whippet, a brave, quick passing and thinking halfback whose best display was in the 2018 Jubilee Cup final when OBU beat Norths 37-31. He scored a cheeky try and was at the forefront of a “Goats Royce” which led 25-3 at halftime.

“We knew if we were going to beat Norths we had to start fast and do something different. They’d beaten us twice and we had to force them to reset. We could hear Gerrard Fasavalu at halftime. We knew an onslaught was coming. We didn’t deal with it well, but it was great to be on the right side of the result,” Fowler reflected.

Fowler breaking the line against Paremata-Plimmerton earlier this season.

Swindale Shield winners Marist St Pat’s await the students in the semi-finals. MSP won the Hardham Cup decider between the clubs in 2019 and for the first time in nine years captured the Jack Lamason Memorial Cup in Round Six of the Swindale Shield. Fowler celebrated his 50th game in that fixture.

“When you look at MSP this year, they’re a complete squad. It’s extremely hard to identify a specific weakness whereas in the past once their starting XV was done they might taper off. We thought young Aidan Morgan might be a bit green, but he produced a masterclass and kicked a dropped goal. They brought James Tuia off the bench and he scored a try. It will be a tough game,” Fowler observed.

“I’ve learned in finals footy if you don’t match the passion of the opposition in the first minute, you’ll struggle. Ories were all over us in the first half last Saturday, a relentless wave inspired by Tuga Mativa’s 100th.”

An old boy of Paraparaumu College, his father Gary is a respected police officer and well-known figure at the Polo Ground with an Ories blazer proudly hanging in his wardrobe at home.

Below: Fowler scoring a famous try against Norths in the 2018 Jubilee Cup final.