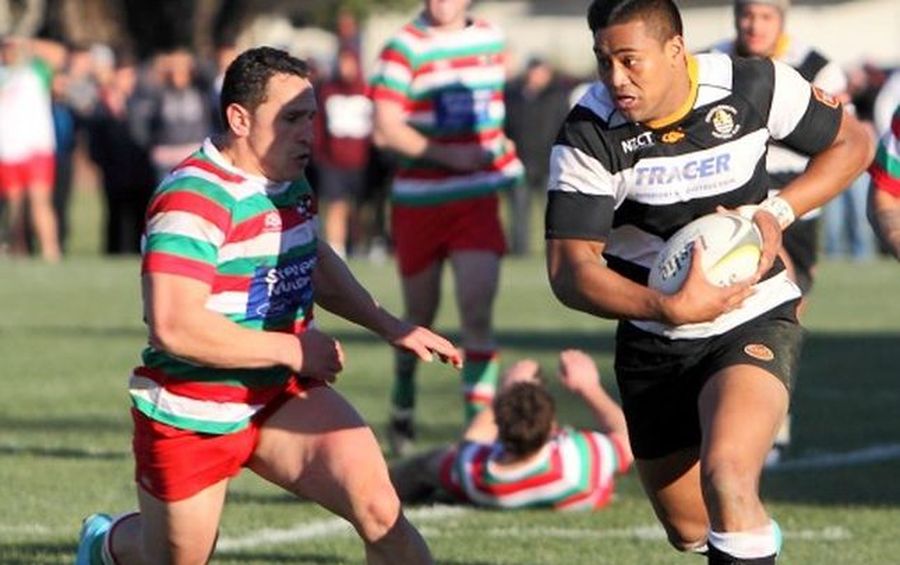 Above: Julian Savea running freely in the 2013 Jubilee Cup semi-final between Ories and HOBM.

Updated from a story two years ago, and a new entry from last year, here are 10 memorable Jubilee Cup semi-finals. Will history repeat?

In the last major semi-final played at Athletic Park, Wellington Lions and Hurricanes wing Lome Fa’atau collected a dropped pass and sprinted 85 metres to score the winning try, against the defending champions Wests. Going into the last quarter, Wests held a 12-6 lead on penalties before Fa’atau’s runaway try put MSP ahead,13-12. Scott Leighton retook the lead for Wests with his fifth kick at goal, but Scott McHardy replied to put MSP ahead for the last time late in the match.

An entertaining 10-try semi-final at neutral Porirua Park. Much of the talk going into the match was the initial Wellington Lions squad naming during the week featuring no Old Boys University players despite them being top qualifiers. A motivated OBU pack was quick to climb into its work and OBU crossed the chalk three times in the first half hour. OBU led 24-8 at halftime. Tawa came roaring back, closing to 22-34 at one stage, But OBU wing Te Wehi Wright sealed the win with 10 minutes to play by poaching an intercept.

‘Harlequins denied by bad bounce’ said the Dominion’s headline, following Petone’s tense victory over Harlequins [now Old Boys University]. Petone five-eighth Simon Mannix had kicked a penalty for his side’s last points of the game on the 65-minute mark to see them lead 21-14. All that was left for Petone to do was hold on to the end. Harlequins needed to score a converted try to force extra time – and they very nearly did. Replacement wing Alaska Taufa’s kick into the in-goal area sat up for flying centre Sale Sorovaki to race through to go for the try. However the ball was squeezed from his grasp by the cover defenders and Petone clung on to win. Petone went on to win the Jubilee Cup in 1993

Wellington and Hurricanes first five-eighth David Holwell kicked five penalties and a conversion and set up the game-clinching try to knock defending champions MSP out of the Jubilee Cup, under lights at the new Wellington Stadium. Twenty minutes into the second half, Holwell caught MSP napping and took a quick tap penalty to set up a try for left wing Tuiavi’i, to put Poneke ahead, 21-12. Holwell kicked two penalties to extend this lead to 27-12. MSP weren’t done however – mounting a gallant comeback and scoring tries to wing Lome Fa’atau (see 1999, above) and replacement Eddie Gray. Fullback James Reilly converted Gray’s try to set up a classic finish, but Poneke held on to fulltime.

Fullback Josh Robertson-Weepu was the toast of Wainuiomata when he stepped up in the dying embers of the semi-final at the Polo Ground and kicked a penalty to send his side into the Jubilee Cup final. Fouth placed qualifier Wainuiomata had led 13-7 at halftime, but top qualifiers Ories coming off a four-game winning streak took the lead through a penalty and try to No. 8 William Heather. Wainuiomata, fifth heading into the previous week’s last round, dug deep, worked their way up field and won on fulltime to make the final for the second time since 2014.

The lead changed hands five times in an Evans Bay Park blockbuster. It was a ding-dong battle in the first half as MSP led 13-10 at the turnaround. Tawa took the lead early in the second half when Telea Seumanutafa dashed 25 metres down the touchline and scored. Following the re-start, Tawa made a mistake in their own half. MSP No. 8 Tokakece barrelled over to score his second try of the afternoon to make it 18-17.James So’oialo kicked a penalty to put Tawa back in front, 20-18, but Fa’atonu Fili replied with two for MSP to make it 24-20. Tawa kicked the ball out on the full but won a scrum penalty on halfway, which So’oialo kicked to make it 24-23. Then Fili kicked a 45-metre penalty close to fulltime.

Another Evans Bay Park nail-biter. MSP left wing Jope Naubo was the hero for his side, scoring two tries including the match winner at the end to help win a seesawing semi-final played in steady rain.MSP held an 11-9 advantage at halftime after Naubo had beaten three defenders to score in the corner,with Petone first five-eighth Dan Kirkpatrick kicking three penalties in reply. The lead changed four times in the second half, with tries to Petone centre Simeon James and MSP openside Victor Vito seeing MSP ahead 19-16, before Petone’s left winger Greg Walker scored and Kirkpatrick converted to see the Villagers in front 23-19. But Naubo had the final say, scoring the winning try.

The strike of god. Petone’s season was seemingly over with time almost up in this playoff against Poneke. But their hooker Eugene Smith had other ideas when he won a tighthead scrum win 40 metres out from Poneke’s line. Petone moved the ball to left wing Alex Telea who scorched down field and set up a try in the corner to centre Tumanu Martin. With scores now level, first five-eighth Earl Va’a slotted the sideline conversion. That was not all, however. Poneke launched one final frantic attack and won a penalty. A deathly silence descended over the Petone Rec as Poneke fullback Brad Cooper lined up the shot to win the game for the red and blacks. But he pulled it across the front of the uprights and Petone celebrated. The following week they pipped Norths 21-19 in the final.

The original overtime thriller. Petone won the match after 90 minutes. Swindale Shield winners Hutt Old Boys went into this Sunday semi-final without three players for religious reasons, including All Blacks first five-eighth and goal-kicker Steve Pokere. Ultimately, it was Pokere’s absence that proved most telling – Hutt missing seven of shots on goal. Hutt dominated the first quarter, but only led 10-0 after 20 minutes. Further tries to both sides and Petone penalties advanced the score to 20-16 to Hutt, before Petone locked it up again at 20-20 with a 77th try to wing Matt Lee (later to coach HOBM). First five-eighth Tim Perez could have won the game then and there with his wide-out conversion, followed by a penalty miss to Hutt fullback Steve Bruce to do the same. Extra time was called for and the winning try was scored by Petone wing Glen Curran after he had set up field position with a hack and chase down field.

The semi-final from the ends of the earth. Ories first five-eighth Fa’atonu Fili won the game for his side in the 17th minute of extra time, after scores had been locked up at 20-20 at fulltime and then 27-27 after 97 minutes. Ories had given themselves every chance to win when flanker Tutasi Masoe crashed over in the corner with the last play of the game and Fili missed a difficult conversion that would have ended it then. Only a few minutes before HOBM themselves had thought they had the game won when their right wing James Kusel had fielded a Fili kick on the fly near halfway and steamed up the right hand touchline to set up a converted try to put them ahead 20-15. Previously, Ories wing Afa Fa’atau crashed up field and set up a try in reply and scores were locked up at 10-10 at halftime. HOBM spent the first 10 minutes of the second half camped inside Ories’ 22 and were twice held up over the line. Eventually they were awarded a penalty and flyhalf Brandyn Laursen took the points to put HOBM ahead 13-10. The match unravelled, with Ories scoring an unconverted try in the corner to All Black Julian Savea to take a 15-13 lead, and both sides scoring twice more to make it 20-20 after 80 minutes.