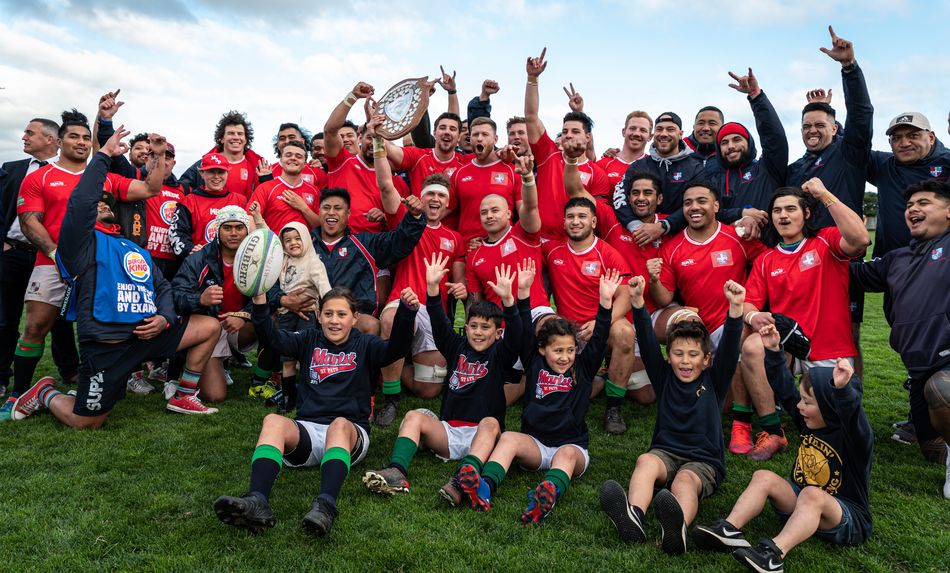 Marist St Pat’s safely negotiated the challenge of the Wellington Axemen to with a bonus point and win the first round Swindale Shield competition, while Petone rose from the pack to finish second on a dramatic final day of the Premier round-robin season in Wellington club rugby today.

At Evans Bay Park, Marist St Pat’s beat the Axemen 52-19, with the result never in doubt by halftime when in-form second five-eighth Isaia Petelo ran in this second to give them a 35-0 lead. They won convincingly and were presented with the Swindale Shield on the field afterwards.

Heading into the final day’s play before next week’s opening championship rounds, there were up to five teams chasing the remaining three spots and the second home ground playoff berth wide open.

Petone headed to Jerry Collins Stadium with the not too insurmountable task of needing to topple Northern United and wait for other results go their way. Their supporters got both, with them beating Norths 21-10 and then reading the news posted on Club Rugby that Oriental-Rongotai had beaten Old Boys University 22-17 at the Polo Ground.

Tawa were thus the unlucky side to miss out, despite them beating Paremata-Plimmerton 50-13 today at home at Lyndhurst Park. Tawa are top seed for next week’s Premier 2 Hardham Cup semi-finals, ahead of Hutt Old Boys Marist who will host the other Hardham semi-final, after their 48-15 Billy Herbert Trophy win over the winless Avalon Wolves at Fraser Park.

In another big result today in the battle of the mid-table contenders, Wainuiomata took home the Hakaraia Trophy against Poneke with a 35-14 win at Kilbirnie Park.

In today’s seventh match, the Johnsonville Hawks got up to beat the Upper Hutt Rams 53-24 in a convincing thrashing at Helston Park, meaning Johnsonville finished ahead of Paremata-Plimmerton, Wellington and Avalon.

Next week’s 9-12 placed playoffs see Poneke (9) play Paremata-Plimmerton (12) and the Upper Hutt Rams (10) meet the Hawks (11) again. In the battle of the cellar dwellers, Wellington (13) will welcome the Avalon Wolves (14) on to Hataitai Park.

In today’s feature match of the Swindale Shield,Petone are in the Jubilee Cup semi-finals for the first time since 2010 after their gritty 21-10 victory over Norths, their first win against the Porirua powerhouse since 2016. In a tense and scrappy encounter, Petone’s defensive intensity and greater impact from the bench were the telling factors in one of the Villagers most noteworthy successes for a decade.

Early ill-discipline set the tone for Norths haphazard display. Logan Henry kicked two penalties and the visitors led 6-0. Norths enjoyed an ascendancy in the scrums and second-five Kienan Higgins profited from the forwards industry when he touched down under the posts. The conversion by Sam Clarke made it 7-6.

Henry kicked a third penalty and the halftime score was 9-7.

Petone scored their first try about five minutes into the second half when captain and openside Jacob Gooch burst down the blindside and linked with second-five Willie Tufui who crashed over in the corner. Much of the match was played between the two ten-metre marks as both sides struggle to develop continuity.

Sam Clarke missed a penalty shot from midfield 38-metres out with 15 minutes to go but didn’t miss from the same spot two minutes later. Josh Southall was the best preformed of an exceptional Petone bench. He made one bust without a boot on and kicked the ball dead. With both shoes he drove low and hard over the line to put Petone out of reach.

Willie Fine was named the Collins Medalist as man of the match. The winger was often damaging and might boast the most vicious fend in the competition. The Petone loose forwards hustled supremely and No.8 Tupou Sopoaga was able to win key lineout possession close to fulltime. New first-five Tom Pere produced a largely composed performance. Norths were well below par today and may make some personnel changes ahead of next week’s rematch.

At the Polo Ground, Ories defeated OBU with a gutsy display and strong defensive effort. In his first starting match in Premier Rugby, St Pat’s Town wing Herman Seumanufagai scored the game’s opening try early on to put Ories up 7-0.

OBU replied with a try to lock it all up at 7-7, before Ories scored twice more before front-rowers Connor Lemon and Whetu Henry. Neither were converted as they led 17-7 at halftime.

OBU first five-eighth Dale Sabbagh opened the second half scoring with a penalty to close the gap to 17-10, and then equalised after a series of attacking scrums with a try to blindside Tiaki Fabish.

Ories held on and went on the attack again, with Seumanufagai scoring his second try that proved the match-winner. For Ories it was a wholehearted performance, while for OBU No. 8 Caleb Delany stood out.

There was no drama at the top of the Harper Lock Shield Premier Reserve standings with Norths presented with the trophy for an unbeaten campaign after beating Petone 39-10, while after a couple of weeks idle MSP warmed up for their home semi-final by seeing off bottom side the Petone Brotherhood by 108-0.

But Petone’s loss, or failure to secure a bonus point opened the door for others. HOBM were able to take advantage, sweeping past Avalon 74-12 to vault into third place but OBU could not, falling 29-21 at Ories and dropping all the way to 8th.

Tawa’s 52-27 win over Pare-Plim saw them draw level on points with Petone, but the Villagers were able to hang onto 4th place by virtue of their 25-24 over the Lyndhurst side three weeks ago. Poneke’s 71-24 hammering of Wainuiomata was in vain, while Johnsonville beat Stokes Valley 40-15.

Having wrapped it up a week ago, OBU Green were presented again with the Paris Memorial Trophy Colts title, but not before being given an almighty scare by Tawa in the Ian Galloway Park cage.

Playing with the breeze, OBU took a while to get going, and when they opened their account Tawa immediately responded. The Goats were able to ease out their advantage with a penalty and a second try against a well-taken drop-goal by Tawa’s Liam Rongonui, but the final act of the half was a 50m penalty by OBU’s Sam Champion to give his side a 20-8 lead. Needing a single point to ensure a semi-final place (despite the statements made in yesterday’s preview) Tawa came out fizzing and scored their second try and generally kept OBU pinned in their own half, but a rare Goats foray into the northern end was rewarded with their third try. Chasing the game Tawa got what they were after, a third try was followed by the all-important fourth with only minutes left, and perhaps had time allowed they could have upset the unbeaten leaders.

HOBM were the only side that could pip Tawa but needed a bonus point win themselves and Tawa to get nothing. However though they could only draw 20-all with Norths White, while Norths Blue ensured that they’ll have a home semi-final by beating Poneke 61-21 on the St Pats turf

The Premiership First XV College competition, St Pat’s Silverstream beat Scots College 7-5 in the match of the round. In a battle of attrition, it was No. 8 Peter Lakai who dotted down for the winning try. These two sides are on track to meet again in a fortnight in the final.

In another big match of the day, Aotea College held off a firm challenge by Tawa College to win 28-19 and retain the Beard Trophy.

In two representative encounters, the Wellington Lions were well beaten by Waikato in Hamilton 53-28, and the Wellington Pride opened their Farah Palmer Cup account with a 62-0 win over Tasman in Blenheim.