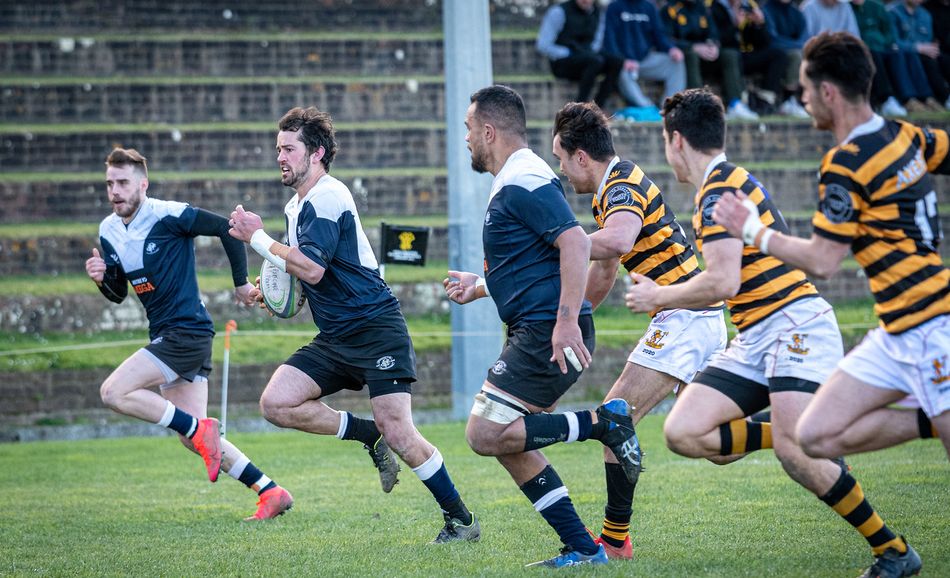 Jacob Gooch running strongly against the Wellington Axemen in a recent match. Last Saturday he played his 100th Premier match for Petone. This Saturday Petone meets Northern United at Porirua in a must-win match to advance to the Jubilee Cup semi-finals.

July 25, 2020, music is rumbling, the chat is short, shrieking, and joyous. Stumbling feet, blurring eyes – for some an Uber is summoned. The time is 10:37 pm (close enough) and the Petone Rugby Club is rocking. The McBain Shield has been reclaimed from the Eagles’ nest and the Hurricanes have stunned the Crusaders in Christchurch.

There is only one thing missing. Goochy. Several hours earlier the Petone captain is hauled from the field seriously injured. Attempting to make a tackle, he smashes into Iona Apineru. The young lump is one of his own! Jacob’s left arm resembles a snapped, dangling paper clip.

Still, in uniform, and with a morphine smirk, Jacob Gooch staggers into the clubhouse. It’s alleged Udy Street hasn’t heard a roar louder since the days of Bob Scott. Some stragglers saw the sun.

Last Saturday, Gooch celebrated his 100th game for Petone. Nursing that doggy arm, the occasion was marked with a 46-22 victory over Paremata-Plimmerton. The win keeps the Villagers in the hunt for their first Jubilee Cup semi-final appearance in a decade.

A model of consistency, his loyal, assertive, and softly spoken leadership has helped Petone become a genuine force in 2020. A win on Saturday against reigning Jubilee Cup champions Norths will secure a top-four spot.

“We’ve been building towards this for a while now. A core of us have been together for some time and that experience with the addition of a few extra players has helped,” Gooch observed.

“In the pack we’ve got Jarrod Hrstich, Pasi Uluilakepa and Josh Houston-Tupou who’ve been awesome. Jack Ross is back, he missed last year injured, that’s a lot of experience. It’s the same in the backs really with Piri Paraone, Logan Henry, and the addition of Tom Carter.”

“Our philosophy has been one game at a time and the job is not done yet, but the vibe of the club is really positive.”

Contenders in the Colts and with a Reserves team playing up a grade, the Prems have won nine of a dozen games with four successes inside 10 points.  Gooch credits the turnaround to club stalwarts like Murray Blandford, Hayden O’Toole, Wayne Smith, Ezra Iupeli and Fridge Masina.

“It doesn’t matter where you sit in the clubhouse, you can end up staying all night. Were close mates and that counts,” Gooch said.

“I’m one of many who could’ve been Prems captain. I’m just there to talk to the ref.”

Petone will need more than talk to conquer Norths who’ve won 10 on the trot. How can Petone topple the Porirua powerhouse?

“Norths are a great side but we’re not leaving anything behind. We play simple rugby and back our ability to execute,” he responded.

The self-employed joiner has scored 14 tries for Petone. Often confused with Game of Thrones character Jon Snow, he’s a huge fan of NBA basketballer Derrick Rose. His partner Megan is expecting to give to their first child this soon. Despite all the good, the painful arm still lingers.

“It got squashed and the muscle pierced through the bone. The muscle has pretty much recovered but there is tendon and ligament damage. The doctor said it would’ve been better if I broke it.”

“It’s alright, I can still tackle.”

Surgery is booked for the end of the season.

Norths vs Petone in the final round of the Swindale Shield kicks-off at 3:00 pm at Jerry Collins Stadium. The match will be broadcast on the E Tu Whanau Footy Show on Te Upoko O Te Ika, 1161AM and 87.6FM.