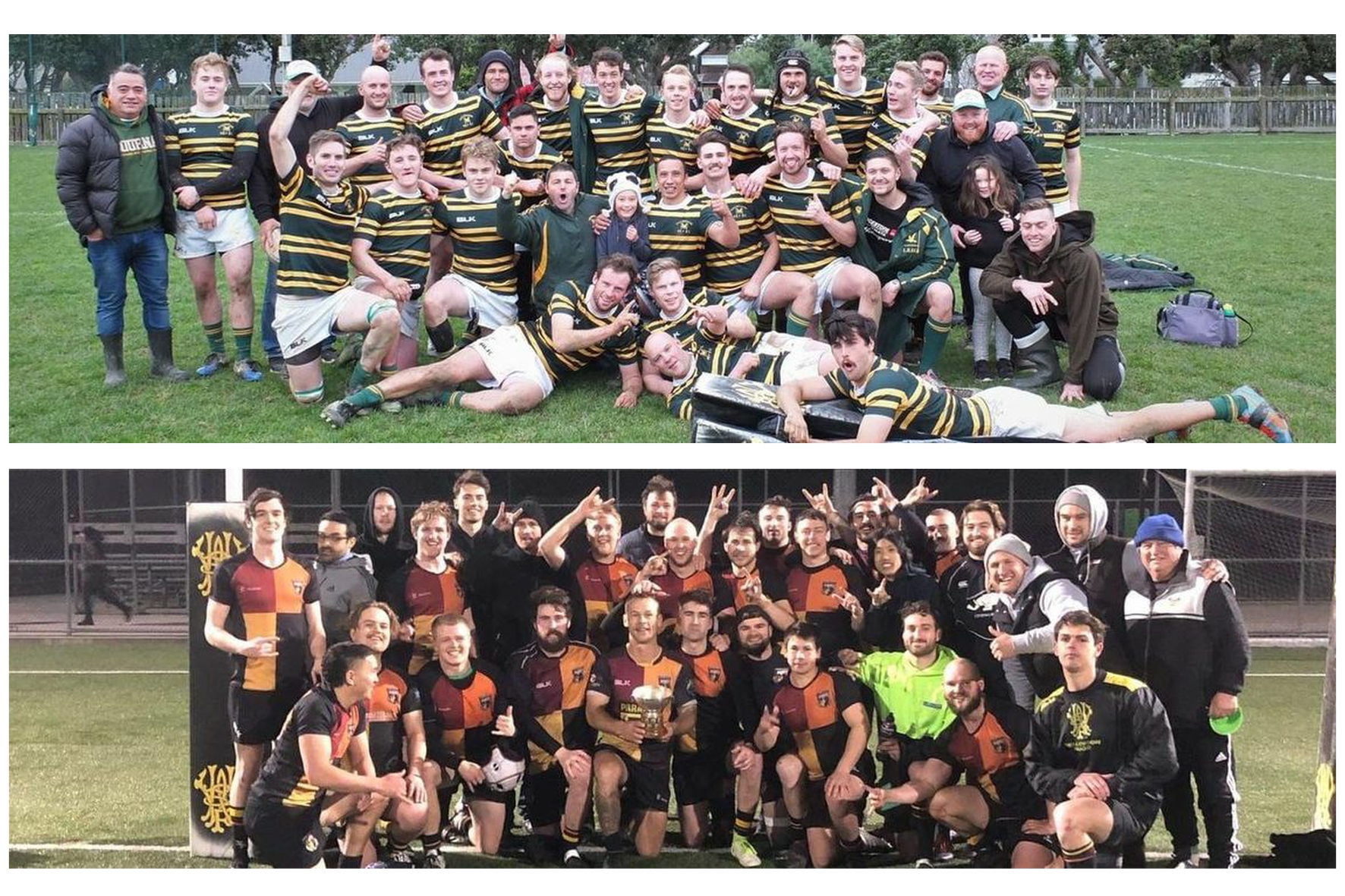 The U85kg competition comes to a close in Wellington this Saturday with the Division 1 Paul Potiki Shield and Division 2 Tony O’Brien Shield finals.

The latter is being played at Hataitai Park at 12.45pm between the Wellington Axemen and Marist St Pat’s, while the former for the Division 1 spoils is being contested at Maidstone Park at 2.45pm between top qualifier and 2018 champions the Upper Hutt Rams and Eastbourne in an all-Hutt Valley affair.

The Upper Hutt Rams head into the Paul Potiki Shield final having won all eight matches in their recently completed first round JC Bowl first round regular season competition by an average winning scored of 39-10. They then went on to beat the Avalon Wolves 27-15 in last week’s semi-final.

Form will count for little this coming Saturday, with these sides having a close rivalry in recent matches. When they met in the JC Bowl a little over a month ago, the Rams prevailed 38-24 at H.W.Shortt Park on Eastbourne’s Old Timers’ Day in a tight and willing match.

Then there is their last knockout Paul Potiki Shield meeting in 2018, that saw the Rams edge Eastbourne 20-17 in a thriller, before they went on to beat Avalon in the famous 100-minute final (highlights below).

Much of their rivalry stems from the St Pat’s Silverstream roots of both teams, with most of the Upper Hutt team old boys of the school and the roots of the Eastbourne side in recent years having also been a group of former Streamers and Hutt Valley contemporaries.

“Our team is mostly a tight group of mates who all went through Silverstream together, and since leaving school we have all come back to play together,” says Upper Hutt Rams captain and halfback Caleb Ladbrook.

“This is our sixth year playing together and there are only two players in our team who are not St Pat’s old boys, and a lot of us including myself played in the 2018 final win,” he says.

“We have formed a keen rivalry with Eastbourne and it’s always close and the players know that Saturday will be no different.”

Several players in the Rams team have Premier experience.

“Our backline is a strength of ours, we have got three players who have played Premiers – fullback Tynan Barrett and midfielders Nate Moen and Petara Rikiriki.

Ladbrook says the disrupted year has helped galvanise the team.

“Due to the Covid-19 situation we didn’t know how the season was going to pan out, so we were just really keen to get together and have some fun and throw the ball around and if the results came our way that’s a bonus, and it’s worked out well so far.”

Caleb also thanked the coaches Brett Pigott and Brook Cowan (both former Upper Hutt Premier players) and management, for their input being a big part of the success. “The last few years has been quite player driven in terms of running trainings and selections, but with our coaching team this year it has taken the pressure off our player leadership group and we have just been able to focus on playing footy and having and fun and that’s transferred into some good results.”

Eastbourne captain and halfback Hami Love says his side will be putting everything on the line on Saturday.

“Upper Hutt is a talented and organised side so we need to match that with intensity and play our natural game,” says Love. “We have the team to do it we just need to put it all together and back ourselves to get the job done.”

The Rams have set the standard for the grade in recent years adds Love. “They have tough forwards and strong ball carriers around the park. They have a lot of guys in the team who understand the game and make the right decisions at key moments. Given too much time, they can make you pay and they don’t often waste opportunities.”

Love is part of a talented backline, with Jamie Fevre solid at first five and with a great kicking game. Eastbourne’s scrum is also another strength, so much so they have penalised regularly for pushing over the 1.5m mark.

Eastbourne Club Captain Willie Davis says the side will be well supported on Saturday:

“Our club is in great shape. We are celebrating our centenary next year so there is a real buzz in the clubrooms. We have a core bunch of supporters who follow the boys around and get pretty vocal. Nothing fires you up like a C’mon Eastbourne from Snifter on the sideline.

“Our Coach Baz Luke has been coaching the 85kg team for 16 years. He has won the 2nd and 3rd division competition but the 1st division eludes the club. It would be a great to give him that for everything he has done for Eastbourne.

“Our prop Dan Hewson is clocking up around 260 games and is a very passionate club man who I’m sure is dying to take it out.

“The boys will also be thinking fondly of two Life members Malcom Rudman and Johnny Macfarlane who unfortunately passed away recently.”

Saturday’s match kicks off on Maidstone Park at 2.45pm. Spectators continue to be limited, but it is hoped there will be a livestream of the final.

About the Paul Potiki Shield

The Paul Potiki Shield was presented by the Poneke club in 1996 in the then new 85kg Restricted grade. Ories stalwart Tony O’Brien was responsible for establishing the grade, with the aim to “to bring enjoyment back into rugby for the skinny, smaller bloke.” Paul Potiki was a Poneke stalwart, a former member of the 22nd Infantry Battalion in WW2, taxi driver and a well-known Wellington identity.

NEWS Good news for under 85kg players! The NZ Barbarians U85 Club Cup is set to kick off this month. To find out more and register ? www.newzealand.rugby #U85ClubCup