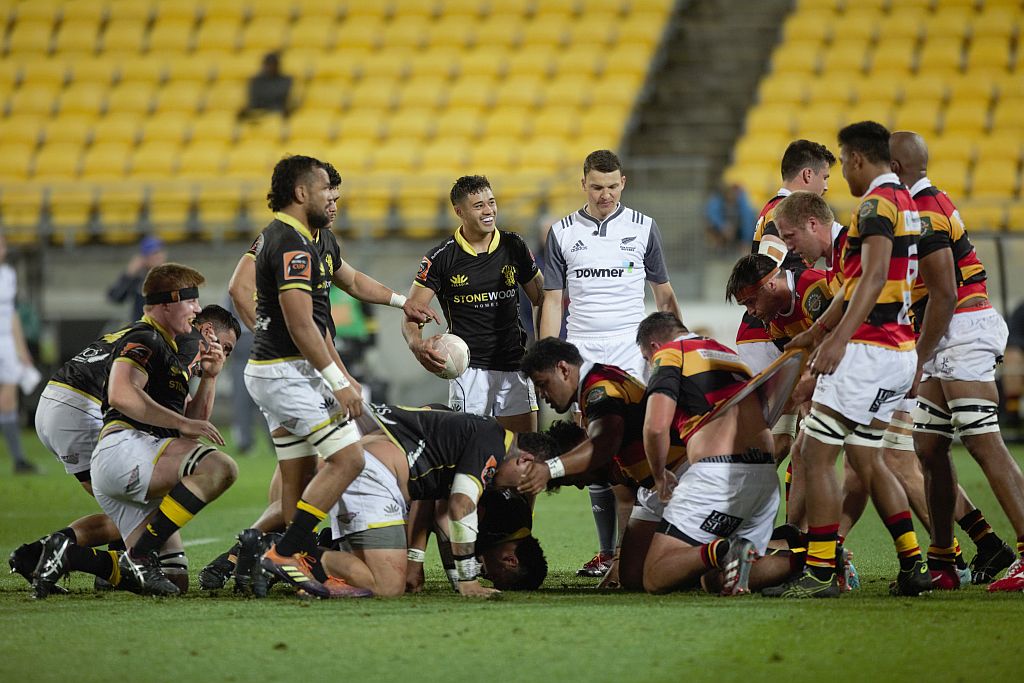 Above: It was all and fun and games when the Wellington Lions beat Waikato in their last meeting last October in Wellington. PHOTO Hugh Pretorius.

It’s been 20 years since the Lions last won the NPC’s major spoils and they will be hungry to open their account with a win over the Mooloo, Both sides are set to be boosted by newly selected All Blacks for their opening fixture. For Wellington, Asafo Aumua, Ardie Savea and TJ Perenara are set to play, while Anton Lienert-Brown and Damian McKenzie will boost the backline ranks of the home side.

Saturday’s opening match has the potential to be a blockbuster between the two traditional powerhouse rivals, who play similar styles of all-action positive rugby, which is reflected in the high scoring history of these games.

The 19 points the Lions scored to beat Waikato in Hamilton in 2013 (19-14) was the lowest winning score that scoreboard operators in this contest have posted in their past 33 clashes dating back to 1991.

Similarly, the 33 combined points scored by both teams in that 2013 match was the fourth lowest combined score in over 40 NPC/Mitre 10 Cup matches between Wellington and Waikato. Only Waikato’s 12-9 and 13-9 wins in 1983 and 1991 and Wellington’s 22-4 Ranfurly Shield win in 1981 (see focus on this game below) were lower, and all three of these were in the era of four-point tries.

The Lions won 34-10 in 2017 in Hamilton, while Waikato also won their 2016 match in Wellington in another frenetic game that saw Wellington ahead 17-14 at halftime and then Waikato come back to win 28-24. Another example of a high scoring Wellington-Waikato fixture was their 2008 clash at Westpac Stadium, which the Lions won Their 2008 meeting also at Westpac Stadium saw the Lions prevail 45-33 after leading 26-18 after 18 minutes.

The Lions’ highest score over Waikato was the 55-18 win in 1988, fullback John Gallagher kicking six conversions and 27 points in the 37-point win.

In 73 meetings overall, Wellington has won 39, Waikato 33 and there has been one draw.

Season openers. Wellington has won 17 of their past 19 season openers. One of these losses was last year when they were defeated 8-45 by Tasman.

Wellington were second in the NPC Premiership division last year (beaten by Tasman in the final), while Waikato were sixth of the top seven teams.

“Whoopee it’s ours again “ screamed the Evening Post headline that accompanied the photo of the jubilant Wellington rugby team disembarking on the tarmac with the Ranfurly Shield in tow the day after lifting the log o’ wood off Waikato at Rugby Park in Hamilton.

400 fans met the team at Wellington Airport at midday on a Thursday, the day after they had captured the Shield off Waikato in front of a teeming mid-week crowd of  30,000 Mooloo supporters.

Wellington had emphatically beaten Waikato 22-4, the 18-point winning margin the second highest at the time by a team lifting the Shield (since bettered with the introduction of five-point tries). For Waikato fans it was achieved in controversial circumstances, their loosehead prop Paul Koteka ordered off the field late in the first half for stomping on his opposite Scott Crichton, and thus were reduced to 14 men for the rest of the match.

Following Koteka’s departure the Wellington pack led by lock Steve Hinds, hooker Frank Walker, captain Paul Quin and No. 8 Murray Mexted took control, and with the wind at their backs piled on 12 points in the last 10 minutes before halftime to establish an unassailable 18-0 lead at the break.

This win was also Wellington’s ninth straight win of the National Provincial Championship and it sealed them the title in the second to last game of the season. The next week they were beaten by Counties but with the Shield and the NPC, Wellington ended the season with the coveted ‘double’ in the trophy cabinet.

Wellington lost the Shield to Canterbury the following September after four successful challenges against Marlborough, Wanganui, Hawke’s Bay and Taranaki, and despite several close challenges, including most recently to Canterbury in 2001 (29-31) and 2005 (14-15).

The above article first appeared in a Wellington Lions match-day programme in 2009.