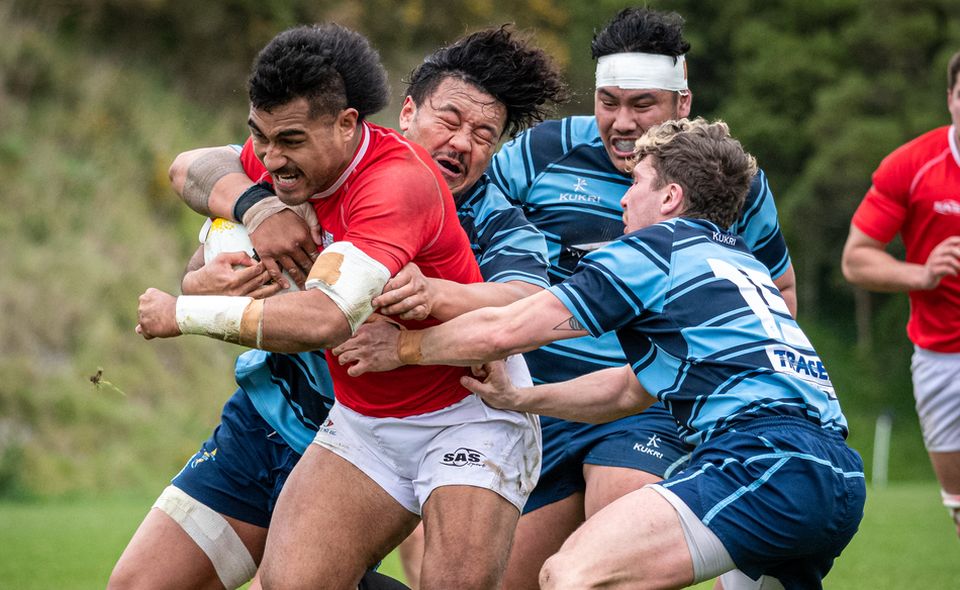 Marist St Pat’s are odds-on to win this year’s Swindale Shield next Saturday and also qualify top for the championship semi-finals the weekend after, but only after surviving an almighty scare today at Helston Park.

Last week, the Hawks won their first Premier match in over two years when they beat Avalon; today they led MSP 19-5 at halftime at Helston Park, before MSP came back to level it up at 19-19 and then scoring again to lead 24-19 before conceding a try at the end to lose 24-26.

The two-point comeback victory for MSP puts them on 50 points on the Swindale ladder, and they will just need a bonus point win in the last round over competition battlers the Wellington Axemen to take the first round title regardless of what goes on below them.

There promises to be plenty going on for the other five teams still mathematically in the hunt to varying degrees chasing the top four positions, with results today serving to kick the can down the road for another seven days.

Chief among them was Old Boys University’s dominant win over Wainuiomata at William Jones Park. An understrength OBU conceded the game’s first two penalties before upping the ante and winning 48-11.

It was a similar story at each of Fraser Park, the Petone Rec and Lyndhurst Park, as the top six side going into the round each secured comfortable bonus point wins.

At Fraser Park, Northern United beat the Avalon Wolves 45-7, at the Petone Rec, the home team overcame Paremata-Plimmerton 46-22 and at Lyndhurst Park, Tawa cruised to a 60-7 win over the Upper Hutt Rams.

At the Hutt Rec, the Hutt Old Boys Marist Eagles held on to beat Poneke 24-22, in a match they needed to win to keep their slim hopes, but hopes all the same, alive.

The seventh match of the day, that didn’t affect the order at the head of the table, was at Hataitai Park, where Oriental-Rongotai dispatched the Wellington Axemen 58-20.

At William Jones Park, for the opening 15 minutes, Wainuiomata were physical and kicked effectively with the northerly at their back and led 6-0. This included a penalty from halfway to flanker Matt Jacobs.

Visitors OBU grew into the game through their stronger lineout, led by lock Sam Godwin, and started to dominate. The first try of the day was scored by OBU wing Ty Poe in the corner.

Wainuiomata flanker Sam Smith was sinbinned for collapsing a maul, leading to OBU’s second try to prop and captain Jonathan Fuimaono that made 10-6.

The Goats scored two more tries in quick succession, a 50-metre intercept to wing Reece Plumtree and a length of the field strike to fullback Sam Reid after a break by centre Alex Ropeti to make it 22-6 at halftime.

With the wind in the second half, OBU asserted themselves early. Prop Finnbarr Kerr-Newell opened the scoring, while Reid scored two more tries for a hat-trick and Plumtree grabbed his second intercept try.

Veteran Uale Mai scored a consolation try for the green and blacks, while flanker Greg Lealofi toiled hard in his 150th match.

At Lyndhurst Park, Tawa were far too strong across the board for the Upper Hutt Rams and won easily.

Under lights, Tawa launched on to attack from the start of the game and soon scored through stand-in halfback Swayde Brightwell who darted blindside from a dominant attacking scrum.

Loosehead prop Sitiveni Paongo showed his power and pace in general play in scoring the next two tries, followed by a well-worked bonus point try to No. 8 Tito Ioane after a break from another scrum by first five Luke Cummings.

Tawa fullback Randall Bishop was sinbinned just before the break, but his team broke out through flanker David Massey who offloaded to centre Tom Maiava and they led 29-0 at halftime.

The Rams improved after halftime and put together some promising phases, with lock Storming Jamie Norman particularly busy. But Tawa weathered the storm and broke out to score through replacement wing Maui Wallace who plucked a Cummings kick out of the air and flew through to score.

Maiava scored an intercept try and wing Romu Senileba scored from the next kick-off to put Tawa up 50-0 with 20 minutes still to play. The Rams finally got on the board following a quick tap penalty on halfway, but Tawa scored twice more to seal a strong win.

At the Hutt Rec, home side HOBM held onto their slim top-four hopes but only just having after being pushed by a gallant and stubborn Poneke side. Playing with the breeze the visitors more than kept the Eagles grounded, despite HOBM establishing a significant dominance at scrum time, but it was the hosts that drew first blood when No8 Mika Alaifatu finished a sweeping downfield move, but Poneke were in front moments later when Isaac Moe-Jenkins picked off a pass, and when referee Richard Gordon sent HOBM’s Willie Rua to the bin for a professional foul Poneke profited firstly through a Caleb Robson penalty and then a try to Jimmy Hewitt when he spotted the blindside unguarded to take a 15-5 lead to the break.

Turning into the northerly Poneke went to what they know best, and their efforts trucking the ball up were rewarded when halfback Mario Counsell scurried over. But HOBM redoubled their efforts with an immediate response through Fritz Rayasi, but it wasnt until a quickfire pair to Freddie Sunia and Fereti Soloa that they eventually drew ahead after 66 minutes. Poneke will regret turning down a point-blank penalty with about 10 to go that would have given them the lead back, but never laid down. HOBM now need a series of events next week to sneak into the top four.

Irrespective of next week’s results, Norths have claimed the Harper Lock Shield for 2020 with a round to spare after their 57-10 Premier Reserve win over Avalon, as their five-point edge over MSP will hold up as they beat their rivals in the opening week of the year.

MSP’s second successive win by default (this time over Johnsonville) did however guarantee that they’ll host a semi-final in a fortnight’s time. Petone kept a hold on third with a 48-10 win over Pare-Plim, and now just need a point next week (away to Norths) to ensure they’ll be part of the picture.

OBU remain fourth after a 60-5 win over lowly Wainuiomata, but Tawa and HOBM are just a point behind after their 26-13 and 27-14 wins over Stokes Valley and Poneke respectively. The sixth match played saw Ories keep their mathematical hopes alive by beating the Petone Brotherhood 88-0 in the biggest margin of the day.

Tawa beat the Upper Hutt Rams 37-10 at Redwood Park, after leading 7-0 at the end of a competitive first half. Tawa scored their first try early, before both sides created several chances at either end. Tawa’s lock was sinbinned just before halftime, but Tawa were unable to press home a golden chance just before the break.

There was a flurry of scoring by both sides early in the second half, including a rare dropped goal by Tawa, as they maintained their advantage and then pulled clear over the final quarter.

There were four U85kg grade semi-finals today, with top qualifier the Upper Hutt Rams beating last year’s winners the Avalon Wolves 27-15 in one Division one semi-final and Eastbourne edging the OBU Scallywags 46-43 in the other.

Status quo at the top of the First XV Premiership, with Silverstream and Scots both maintaining their unbeaten record ahead of their meeting next week. Silverstream overwhelmed Aotea 69-3, while Scots had to work harder than the scoreline suggests to overcome Wellington College 31-7. The rest of the results were somewhat closer with St Pats Town getting up 19-10 over St Bernard’s, Rongotai prevailed 36-31 over winless Mana in a high-scoring encounter, and there was a minor upset as Tawa notched their second win in beating Wairarapa 24-18.

In Premier 2 leaders Upper Hutt showed no mercy in obliterating the Wellington College 2nds 95-3, and widening their gap at the top to the Silverstream 2nds who had the bye. Hutt International are now the only other side that can make the final and beat Wainuiomata 27-7 while down the table the Town 2nds beat Paraparaumu 51-12 and Porirua had a profitable day up the coast in winning 28-12 over Kapiti

There were two representative matches up the line today.

At Levin, the Wellington Lions were beaten 26-14 by the Manawatu Turbos in a National Provincial Championship pre-season game.

At Waikanae, the Wellington Pride beat the Manawatu Cyclones 27-0 in their Farah Palmer Cup warm-up encounter.

Club Rugby Awards of the Year