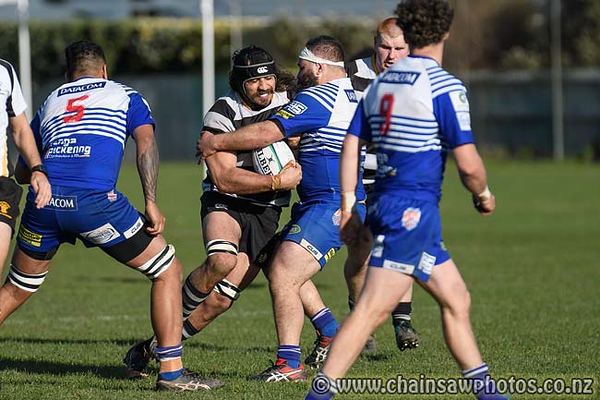 Norths and other leading contenders will be looking to wrap up their semi-finals spots with a round to spare tomorrow.

5.00pm edition: We are into the final month of the club season, and starting tomorrow it’s a super-busy September [as scheduled] of rugby across all levels of rugby, with the business end of the club and college season intersecting with the opening rounds of the National Provincial Championships.

It’s round 12 of 13 of the Premier Swindale Shield and Premier Reserve Harper Lock Shield competitions, there are two weeks to play in the Colts and Reserve grade round-robin competitions, while it’s the semi-finals of the U85kg grade tomorrow. A full round of college rugby is also scheduled tomorrow around the grounds.

Meanwhile, the Wellington Lions are in action tomorrow for the first time this year, playing Manawatu in Levin in their one and only pre-season match before their 2020 National Provincial Championship campaign kicks off next Saturday against Waikato.

The North-South All Black trial is also being played at Wellington Stadium tomorrow night.

The full Lions squad as named last week, plus a couple of extra players (for a total of 27) is in action in Levin tomorrow – how the absence of these players in club line-ups tomorrow and in future weeks affect clubs adds another layer of intrigue to the Swindale Shield.

Six teams are vying for four spots heading into the final two rounds, and, on paper at least, all six can still win the Swindale Shield.

The picture could become much clearer tomorrow evening, as to the winning contenders in the final round and the make-up of the semi-finals.

Although all the leading teams – MSP, Norths, OBU, Petone, Tawa and HOBM – are playing teams residing in the second half of the draw, so it could also come down to a last round shoot-out.

After a dramatic day last week that changed the order of the standings and the dynamic for a couple of teams, most notably Petone and Old Boys University, it is Marist St Pat’s who are in the box seat.

Leaders by a point, MSP will be favoured to beat Johnsonville with a bonus point and move to 50 points. Johnsonville are coming off their first win of the season last week when they beat Avalon 38-12, but MSP could bring too much firepower to Helston Park.

MSP lose hooker Tyrone Thompson and first five-eighth Aidan Morgan to rep duty tomorrow but lose little on the field in terms of experience, the pair replaced by Valentine Meachen and James Proctor respectively. Look out for wing Sagele Aukusitino to do something special in his sixth Premier start on the wing.

Defending Jubilee Cup champions Northern United will be heavily backed to beat the Avalon Wolves at Fraser Park and advance their tally to 49 points.

N0. 8 Luca Rees will be playing his blazer game for Norths, who have made several changes, but the form of their Premier Reserves should make the transition in personnel a smooth one. Look out for a big shift from Avalon prop Daley Ena against this former teammates, while the brothers Aquila, Jordan and Jayson could be players to fire in an attacking Wolves backline.

If there are any twists and turns tomorrow then these could be at William Jones Park, where Wainuiomata host Old Boys University. Wainuiomata are the best of the rest in seventh place, while this is a match they get up for. Last year in this fxture they beat OBU 23-21 and the year before beat them 22-20. OBU will also be missing some of their players to the representative matches, including Morgan Poi, Caleb Delany, Taine Plumtree, Teariki Ben Nicholas, Callum Harkin and Wes Goosen.

Dale Sabbagh returns from injury to first five, while Jonathan Fuimaono leads a pack all of whom have Premier experience. In the backs, recent in-bound Ories transfers Malo Manuao and Alex Ropeti team up in the midfield. The bench is not short of big game experience, with Finbarr Kerr-Newell and Jason Eaton both riding the pine for the Goats.

Wainuiomata have also made changes, with last week’s first five and fullback TJ Va’a and Josh Robertson-Weepu missing from their line-up and replaced by John Monu and Solomona Mapesone. Veteran midfielder Mike Lealava’a makes his first start of the year, while promising flanker Sam Smith makes his first start back from recent injury.

Fourth placed Petone will hoping to bounce back from their close loss to Tawa last weekend when they host lower ranked Paremata-Plimmerton at the Petone Rec. On form, Petone shouldn’t have too many problems – despite a number of injuries – but also might need to as they play Norths in the last round.

If fit, flanker and captain Jacob Gooch will play his 100th Premier game, while Logan Henry moves to 10 and Cam Ferreira to nine and Willie Fine to fullback in similar positional changes to other teams this weekend. Loosehead prop Si’u Anae wins his first Premier start.

Petone and Paremata-Plimmerton also contest the Ken Gray Cup, after the legendary Wellington and All Blacks prop who had affiliations in both clubs as a player and administrator.

Fifth placed Tawa will see themselves as needing to beat the Upper Hutt Rams at home at Lyndhurst Park. Like OBU, Tawa won’t have it all their way against the Rams who beat the HOBM Eagles two starts ago. Depending on what goes on above them, Tawa may just need a win without a bonus point as they play Paremata-Plimmerton in the last round.

Tawa lose their nine-10 axis to the Lions tomorrow, but Kem Hauiti-Parapara and Trent Renata’s replacements are able lieutenants. Swayde Brightwell and Luke Cummings will keep the Lyndhurst machine rolling behind a pack that on paper should have too much firepower for the Rams who have three players in their 22 on debut.

A couple of defeats for the HOBM Eagles, in particular to the Rams, could prove costly for them. The Eagles are sixth and five points adrift of fourth placed Petone. What’s more, they play Poneke tomorrow in a match no Eagles supporter will take for granted. Poneke, while out of Jubilee Cup contention, will prove a tough opponent for them with captain Huntley running out to play his 200th match. Should they lose tomorrow, HOBM are probably gone, but in their favour is their opponent next week is Avalon.

Poneke have named a largely unchanged line-up from that which beat the Axemen last week, with Galu Taufale coming off the bench to start at lock to lead the team with double centurion and centre Ben Huntley.

In one other match tomorrow that won’t affect the jostling for positions at the top of the table, the Wellington Axemen hosts Oriental-Rongotai at Hataitai Park for the Alby Jack Memorial Cup after the former Wellington halfback who plied his trade in the 1950s. Ories are eighth while Wellington are 12th and both can move up the table with wins tomorrow.

Home side the Axemen have made two notable positional changes in the backs, with regular halfback and some-time fullback Isaac Bracewell slipping into the saddle at 10 and regular first five Matt Goosen dropping back to fullback. William Cosgriff starts at halfback.

A reminder of the tiebreaker rules:

The Premier Reserve Harper Lock Shield table is similar to the Swindale Shield, in that most of the semi-finals spots are still vacant with two rounds to play.

It is hard to see leaders and unbeaten Norths not cementing the top qualifier’s position with a week to spare. They play Avalon, who like their Premier counterparts, are languishing near the foot of the table.

Second placed MSP are odds-on to seal the second playoff place for the upcoming Ed Chaney Cup semi-finals and will do so by beating the Johnsonville Cripples, who are in ninth.

The table heats up below Norths and MSP, with five teams separated by as many points heading into the final fortnight.

Petone are third and will advance their cause with a bonus point win over Paremata-Plimmerton – but they will need to as they play Norths next week.

Poneke currently occupy fourth and can seal their destiny by beating the sixth placed HOBM Eagles in the early game at the Hutt Rec tomorrow and then Wainuiomata in the last round.

Fifth placed OBU will need to beat Wainuiomata this week, before needing to beat Ories in round 13 to sneak into the four.

Seventh placed Tawa can also still sneak into the four if results go their way, but first must beat Stokes Valley tomorrow in the early game at Lyndhurst Park.

Ories are eighth and still mathematically alive to make the top four semi-finals but will need to beat Petone White tomorrow on the Petone Rec 2 and also rely on at least two other results going their way to take their challenge into next weekend.

All Harper Lock Shield matches tomorrow kick off at 12.45pm.

OBU Green are out in front on 38 points and have already booked their playoff berth, but can go one better and cement a home semi-final tomorrow by beating lower ranked Poneke at home at Ian Galloway Park.

Norths Blue on 31 points head the chasing pack, and they play OBU Black who are not one of these teams at Jerry Collins Stadium tomorrow.

Petone Blue are third on 27 points and they host the Norths White team on 26 points in a crunch fixture at the Petone Rec.

Of the two teams on 26 points, HOBM Green has the bye tomorrow and Tawa plays Vic Calcinai contenders the Upper Hutt Rams.

There are three weekends left of the Reserve Grade competition and Ories’ 15-12 win over the Upper Hutt Rams J8s last Saturday went a long way to deciding the winner.

Top meets bottom on Saturday at the Polo Ground, where Ories hosts Stokes Valley at 12.45pm.

The UH Rams J8s must pick up the pieces from their defeat last week and head to Ngatitoa Domain at 2.45pm to play the Paremata-Plimmerton Punters in a battle between second and third.

Fourth meets fifth with the Poneke Ruffnuts and the UH Rams Thirstys colliding on Kilbirnie Park 1 at 3.00pm.

Elsewhere, the MSP Internationals play the OBU Teddy Bears on Kilbirnie 1 at 12.45pm, the OBU Pink Ginners and 69ers play tonight at Boyd Wilson in an intra-club Jackie Ruru Shield fixture, the UH Pirates and Wellington meet on Maidstone 2 at 12.45pm and the OBU Righteous Pack and Wests Mixed Veges are at Ian Galloway 1 at 3.00pm.

There are three rounds to play in the First XV competition, but with no semi-finals this year, it is Scots College and St Pat’s Silverstream who appear odds-on to meet in the final.

The two teams are unbeaten and one of them would have to lose two of their next three games and for either joint third place St Pat’s Town and St Bernard’s Colleges to come storming home to avoid that outcome.

This coming Saturday sees Silverstream hosting Aotea College, whose focus could be on retaining the Beard Trophy next week when they will accept the challenge of Tawa College, whilst Scots College play sixth placed Wellington College.

The match between St Pat’s Town and St Bernard’s at Evans Bay Park to cement outright third appears to be the game of the round, while Rongotai College hosts Mana College and Wairarapa College welcomes Tawa College in the other two matches.

Upper Hutt College and the St Pat’s Silverstream are the frontrunners of the Premier 2 Murray Jensen Cup and tomorrow the Upper Hutt team plays the winless Wellington College Second XV and Silverstream has the bye.

The Wellington XV to play Manawatu in a NPC pre-season fixture at Levin on Saturday, kick-off 1.05pm, is: