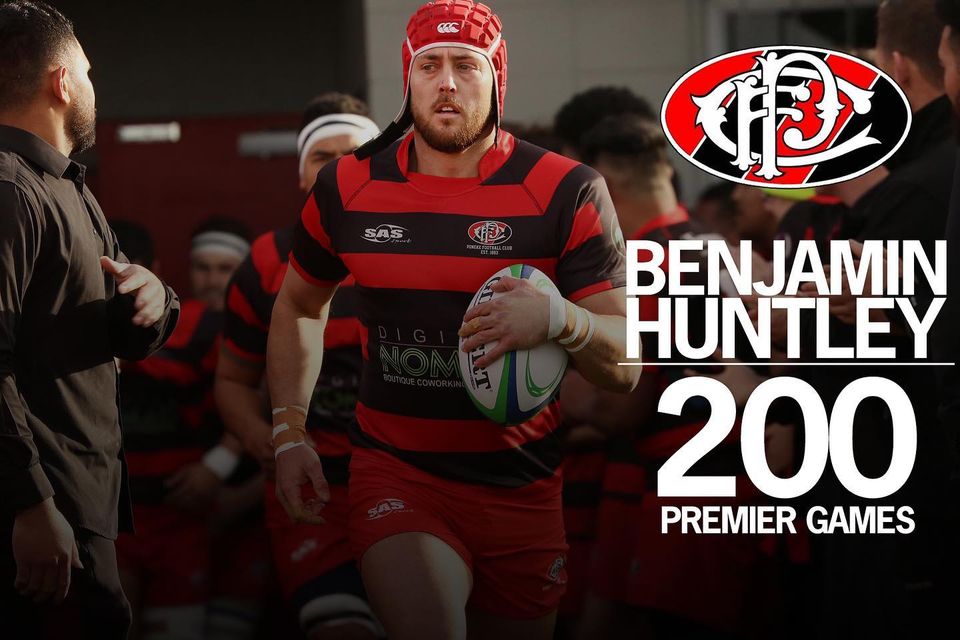 Poneke captain and midfielder Ben Huntley joins an illustrious club at Poneke when he runs out to start his 200th Premier match against Hutt Old Boys Marist this Saturday.

The last player to have passed 200 games [starting team caps, not off the bench] for the Kilbirinie club was the late Misiluni Moananu in 2012, and prior to him both his brothers, Fa’atoto and Misipaulani, and before them John Jackson and Richard Watt in 1999 and 2001 respectively.

We caught up with Ben three years ago when he played his 150th match for a Q and A story, and this week revisited this – with a couple of updates and new questions.  See below:

Club Rugby: Congratulations on the milestone of 200 games for Poneke. How special is this milestone for you?

Ben Huntley: It’s definitely a  huge privilege to be able to reach that 200 milestone when I look at some of the club legends who have achieved that before me. With the season being in jeopardy with the whole Covid-19 situation I did start to wonder if the season did get cancelled would I ever get there but luckily it all worked out and we got to go out and play some footy.

CR: You played your 150th against Marist St Pat’s in April 2017, can you recall much from that game and occasion?

BH: I can’t remember much of the game against MSP for my 150th apart from the boys digging deep that day to get the win [29-27] so I’m hoping for the same result this week for the 200th. As for that night let’s just say that’s even harder to recall! I am sure that will be much the same after this weekend’s game, keeping in mind level 2 restrictions of course.

CR: Let’s go back over a decade to your first Premier game – who was it against, how did it go?

BH: My first game was Round One in 2008 against Norths. I initially hadn’t made the Premier squad for that year until I got the call from Watty [then coach Richard Watt] on Friday night saying I’d be starting on the wing tomorrow as Evan Belford had injured himself at training. So, I didn’t have much time to prepare. All I can really remember from that game is having my hands full, coming up against a rampant Sinoti Sinoti.

CR: Have you always played for Poneke?

BH: I first started playing rugby in U12s for Poneke so had two years there before I went off to college and had no hesitation in coming back once I had finished. I started back with the 80/80s for a year before which was more party than rugby then I decided to knuckle down and take rugby more seriously after that.

CR: Tell us a bit about your college rugby career?

BH: I went to Rongotai College but only managed to make the second XV as Dave Meaclam wouldn’t give me a shot in his First XV telling me I was too small. So a Second XV final Championship captained by Matt Bryant would have to be the number one highlight of my college career.

CR: What are some of the highlights of your club playing career?

BH: Playing in the Jubilee Cup final in 2010 was a highlight even though I only managed 8 minutes of the bench that day and we went down to a star-studded Norths team. A late Jeremy Te Huia penalty at Kilbirnie Park to beat Ories in 2010 for the Jimmy Grbich Shield and a 20-odd point comeback to beat MSP with Daniel Ramsey scoring in the corner at the death were some other highlights. Getting my blazer for 30 starts was a huge honour.

Marking guys on the wing like Cory Jane, Julian and Ardie Savea was personally a big challenge. My most memorable try would have to be a try in the Jubilee cup semi-final in my first year against MSP but think that was the only points we scored that day so wasn’t enough to win.

CR: What’s your favourite ground to play on – Kilbirnie Park No. 1?

BH: Yeah no better ground than Kilbirnie Park even though there were times there were I wouldn’t see the ball out wide as it would turn into a mud bath [prior to being re-laid a few years ago] and the ball wouldn’t leave our forward pack! I have to say I cannot complain with the few times we’ve played at Westpac Stadium either.

CR: Who are some of the memorable players you have played with at Poneke?

BH: Playing alongside guys like Dane Coles and Charlie Ngatai was special as they went on to be All Blacks. It was always an honour to playing alongside club legends like the Moananus and Evan Belford as they brought so much passion to the jersey and showed you what it really means to wear the red and black jersey.

CR Who are some of the toughest Wellington club rugby opposition teams that you have played against?

BH Coming from Rongotai College, playing against Ories was always something to look forward to as it was against old school mates and it is sort of a state of origin type feeling when we play them. Also I remember there being no easy games coming up against strong norths teams who we never seemed to beat when it came to Jubilee Cup playoffs.

CR: Who are your toughest or most respected Wellington club rugby opposition individuals that you have played against?

BH: Playing against Fa’atonu Fili is always a hard task, particularly at fullback with his pinpoint kicking game and bag of tricks. Also other tough opponents that come to mind are Whetu Henry from Ories Jason Love from Wainuiomata with his speed, and it’s always good to get one over my good mate from the Axemen, Hilton Mexted.

CR: Are there any coaches in particular that have helped you out?

BH: Two coaches that come to mind are former Poneke backs coaches John Jackson and Grant Cederwell. They both helped me develop my game over the years, especially when I was starting out as a Premier player, and they have also been good mentors/mates along the way.

CR: What changes have you seen in the competition during your time playing?

BH: I feel overall that the gap between the top and bottom Premier sides has closed over the years and the current competition is as strong as ever.

CR: You played much of your early rugby on the wing or fullback but you are now a regular in the midfield. We take it the move was due to you slowing down, and do you have a favoured position?

BH: Yeah, the legs slowing up definitely had a part to play to a move into midfield! I remember Jacko who was coaching at the time wanted to sure up the defence in midfield so moved me into second five and paired me up with Cole Stewart at centre and we worked well together that year so I sort of just ended up staying there.

CR: On captaincy. How long have you been Poneke’s captain, and how does that change your individual game, if at all?

BH: This has been the first year I’ve captained the team, it was an honour when Misipaulani rang me and asked me if I would be captain . I’m not the most vocal guy in the team but try to lead with my actions. It also helps having Galu as my co-captain as I can feed off him and he fires up the boys when needed. I’ve also played under some inspirational captains like P in my earlier years and Greg Foe most recently who just bleed red ‘n black so I’ve learnt plenty from both of them.

CR: Thank you and good luck for the game on Saturday!

The Monday rugby wrap: 28 February (some news and information to start the week)