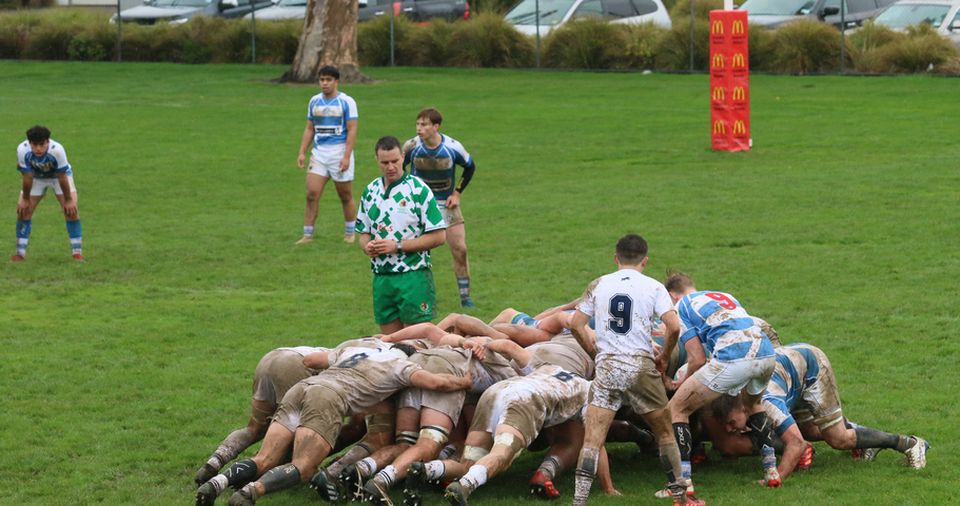 It will be talked about for years and depending on your school colours recalled with dramatically different narratives.

In driving rain, and on a shoddy backfield, it was a battle of attrition likely decided by bossing territory.

Winners write history so the Palmerston North perspective first. Palmerston North camped inside the visitors’ 22 for almost the entire second half and was rewarded for their greater patience and discipline with a narrow victory.

Down 12-6, and with a minute remaining, left-wing Jack Trotter scored right beside the corner flag and side-line to close the gap to 12-11. There was a long conversation between the referee and assistant official before the points were awarded around protesting defenders. Step forward fullback Curtis Heaphy. The First XI cricketer slotted the sideline conversion from 25-metres out, standing well outside the field of play, in a genuinely high-quality moment.

Silverstream second-five Riley Higgins restarted, his first kick dribbling over the ten-metre mark and being secured. Ordered to retake, the second effort fizzled out more lamely than an untied balloon mid-flight as an earnest chaser was hit in the head and left with the headache of defeat.

The second spell was scoreless until the Trotter/Heaphy moment. Palmerston North’s reserves added greater zeal to their pack and improved a wobbly lineout as Palmerston North hammered away with little profit.

The Silverstream perspective. They were blown off the park by the local ref.  Loose forwards Sam Morgan and Peter Lakai were both sin-binned late in the piece as the whistle became the biggest opposition. Tackle, penalty, tackle, penalty was a common order of events. The try? The bounce of the ball and the position of the tackled player’s foot in relation to the touchline left some doubt.

Heaphy opened the scoring with an easy penalty, but Silverstream tighthead Braydin Harawira muscled over for the first try after a clinical lineout drive.

Heaphy reclaimed the lead for Palmerston North with a second 20-metre penalty but Silverstream first-five Tjay Clarke often forced the hosts into retreat with his left-foot.

Higgins scored a cracking try just before the interval when he chased down a chip by Lachie Forbes following a roaming run at halfway concluded with superior vision. Lakai and Emmanuel Solomona were busy in the Silverstream pack.

Heaphy! Had his kick not been landed Silverstream might have been celebrating a ‘backs to the wall’ classic.

This Saturday Palmerston North, with a 7-3 record, challenge Rotorua Boys’ High School for the Moascar Cup (the Ranfurly Shield of secondary schools’ rugby). Silverstream travels to Aotea College with a win all but guaranteeing them a place in the Wellington Premiership final.

St Bernard’s College have beaten Hato Paora College today at the Hutt Recreation Ground 36-5. Played in mild conditions, St Bernard’s opened the scoring through Nonu Tuia in the first five minutes. Hato Paora’s defence held off the St Bernard’s attack until the 21st minute when La-Shakarn Lolo cut the line and scored under the posts.

Hato Paora then had the better of St Bernard’s in the last 15 minutes of the first half, camping inside their 22. Off the back of a scrum, Manahi Chilcoine scored Hato Paora’s sole try, gliding through the St Bernard’s defence. Half time score was 14-5.

In the second half, St Bernard’s exposed the tiring defence of Hato Paora running out winners 36-5. La Shakarn Lolo scored a hat trick of tries.

Standouts for St Bernard’s was Jacob Laban with his all-round game, Nonu Tuia and TK Wanoa were strong at the set pieces and open play.

Below: The winning try and conversion for Palmerston North Boys’ High School:

Below: The Wellington and Super 8 tables and draws for this coming weekend: