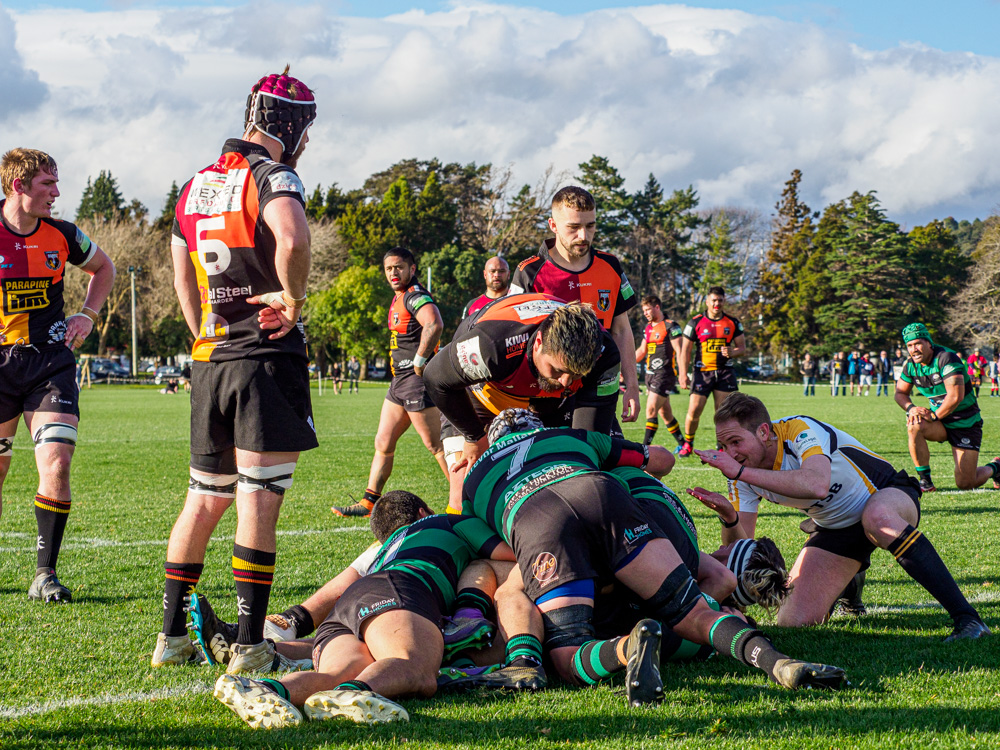 Two more weekends of Premier club rugby before this year’s Swindale Shield winner is found and then on to the Jubilee Cup semi-finals.

All six of the leading teams are in with a chance – mathematically – of winning the Swindale Shield, although Marist St Pat’s supporters are on the home straight this week with their team ‘just’ needing bonus point wins over Johnsonville and then the Wellington Axemen to win the first round title.

Two of these six teams are going to miss out on the top four semi-finals though, so a blockbuster final fortnight is coming right up.

Games this coming weekend at a glance are:

#1 – Wainui v OBU
#2 – Avalon v Norths
#3 – HOBM v Poneke
#4 – J’ville v Marist St Pats
#5 – Petone v Pare-Plim
#6 – Tawa v Upper Hutt Rams
#7 – Wellington v Ories
+++++
How will the loss of Wellington Lions players from club rugby affect the competition, and which clubs will be affected the most? This coming Saturday, the Lions are scheduled to play Manawatu in their one and only warm-up fixture, so presumably all fit 36 players (minus those involved in the North-South match) will be involved in that.
+++++

It’s also the semi-finals of the U85kg grade this coming weekend, with the Paul Potiki Shield semi-finals.The Upper Hutt Rams finished top on 38 points, followed by Eastbourne on 28, OBU on 25 and Avalon and Wellington equal on 24 but Avalon qualifying because they won their head-to-head 32-10 in the third round.

The two semis will see the Rams hosting Avalon in a replay of their match on Friday night and Eastbourne hosting third placed OBU.

In Wellington on Wednesday, St Bernard’s College hosts Hato Paora College (Feilding) in a rescheduled traditional from a fortnight ago. Kick-off is 1.15pm.

Lost in the news last week, was the suspension of HOBM hooker James O’Reilly for five weeks. O’Reilly received his penalty that takes him out of club rugby for the rest of the season for chit-chat with the referee following his side’s 10th round 24-25 loss to the Upper Hutt Rams. O’Reilly was picked in the 36-man Wellington Lions squad on Friday.

When crowd attendances are restricted are local yokels even more conspicuous? The bloke in the hoodie at Hutt Old Boys versus Old Boys University was animated last week, but was polite this week.

Iona Apineru is proving an enforcer of the Petone Premier team. The former St Pat’s Silverstream head prefect and Wellington U19 player has been playing lock in recent matches, and on Saturday put in a series of bruising tackles. He also came within a whisker of drawing the match with Tawa with the kick to come on Saturday with the match ending with him held up over the line.

Above: Scots College tighthead prop Jonty Bird celebrated his 50th match for his team’s First XV on Saturday by scoring the winning try in their 15-10 win. His team gives him a haka after the match.

Another tighthead prop making his first Premier appearance in a while on Saturday was Poneke’s Lalovi Tafua, scoring a try in Poneke’s 38-7 win over the Wellington Axemen. He made his last Premier team start in May 2017.

Julian Savea was a minor surprise selection in the 36-strong Wellington Lions squad for the upcoming NPC season for this publication, as we thought he has signed with Auckland a few weeks back. What position will he play, midfield or wing? Will he make the starting XV?

Wes Goosen scored the first try of the match for the Old Boys University Goats against the HOBM Eagles on Saturday, and then left the field holding his leg. Hopefully this is just precautionary.

A storming first half of club rugby on Saturday by Alex Fidow, ahead of him joining his North team squad mates for this coming Saturday’s All Blacks trial. In his time on the field, Fidow stopped two certain tries with bruising, scrambling defence, and he set up one of Ories’ tries. However, this was in Reserve Grade. So what was he doing playing in Ories’ third XV and not at the least their Premier Reserves whom Ardie Savea played for last week? What’s more, this was a top-of-the-table fixture against the Upper Hutt Rams J8s. Ories won 15-12, so with no playoffs in the Reserve Grade this year, Ories will probably go on and win the title. No problem with Fidow legally playing – refer to WRFU bylaw 8.11 – but at a time when community rugby is struggling to stay together these grades perhaps shouldn’t have fully fledged professionals playing in them.

The Reserve grade is typically made up of past Premier players giving back to clubs, and generally the guys have played for these teams for many years. They all get along and have their rivalries, making it a good competitive grade and any team can win on the day. it could be suggested that having a leading Hurricanes player playing in this grade undermines the reason the majority of the players are playing for, not to mention potentially a health and safety issue, and in this case helping to determine the outcome of the competition.

Another Wellington raised player recently selected in a NPC squad elsewhere is Maddie Feaunati, named in the Otago Spirit Farah Palmer Cup squad. Daughter of MSP’s Director of Rugby Zac Feaunati, Maddie was a leading member of both St Mary’s College’s rugby and netball  teams over the past couple of years.

In Hawke’s Bay, Hastings Rugby & Sports have won the truncated 2020 Premier rugby season, beating Taradale 22-16 in the final on Saturday at Napier’s McLean Park.  Hastings won three tries to one, with Faleapuna Matamata scoring a brace. The final was for the Maddison Trophy, with the Nash Cup in abeyance this year.

Taradale’s Majella Tufuga was the competition’s leading try scorer with 11 tries, while Hastings sharp-shooter Connor McLeod was the leading points scorer with 117.

Johnsonville snapped their 29-match losing streak on Saturday. Rimatuka lost 22 Swindale Shield matches in a row by an average score of 60-3 while Paremata-Plimmerton lost 20 games in a row between 2015 and 2016.

The Norths 100 Club or the 1.00 club to comply with crowd restrictions. What a bunch of good buggers.

We want to hear from anyone looking for a new experience in your coaching journey….#new2021 #nextstep

The New Zealand Herald launched an extraordinary attack on First XV rugby last week, with a series of articles.

All were behind a paywall though, so no one could read them, so an own goal there. Although, some day soon these media companies with a pay-to-read model might discover blockchain technology, whereby instead of paying a blanket weekly or monthly subscription to have access to everything readers can scan their crypto wallet or NZ Coin digital wallet against the screen and unlock what they want to read for a few cents at a time.

One piece not behind a paywall that was published on Friday was a video interview with Hawke’s Bay utility back and former Wellington Axemen Ollie Sapsford.

Watch and read their profile with him HERE

Canterbury defended the Ranfurly Shield on Friday with a 71-7 win over  challengers North Otago. Canterbury led 45-0 at halftime and pushed on to win comfortably in a typical one-sided contest between a professional union and a Heartland one.

Also noted on Sky Television on Saturday afternoon was live club rugby out of Sydney, Australia. This is the Shute Shield, a semi-pro competition, although the standard is no better than our leading Premier club rugby teams in Wellington, Christchurch, Waikato, Auckland etc. So perhaps Sky could broadcast a feature club rugby match from around the country live each week next year?

On the subject of Sky TV, the upcoming NPC draw has the Wellington Lions scheduled to play a home match outside of their sponsored stadium and at Jerry Collins Stadium, and a day game no less, on 31 October against the Tasman Mako. If we are out of Level 2 by then and crowds are allowed in then this is a long time coming and could be a big day!

Looking ahead to the Jubilee Cup semi-finals and Final, if these are going to continue to be live-streamed by multiple crews, then perhaps one of them could set up action replays and a TMO could be used to check important moments?

Below: MSP scores a try from the opening kick-off in their match against Paremata-Plimmerton on Saturday.

What has been the fastest try in rugby? Club Rugby recalls OBU scoring from the kick-off in a game at the Basin Reserve a few years ago.