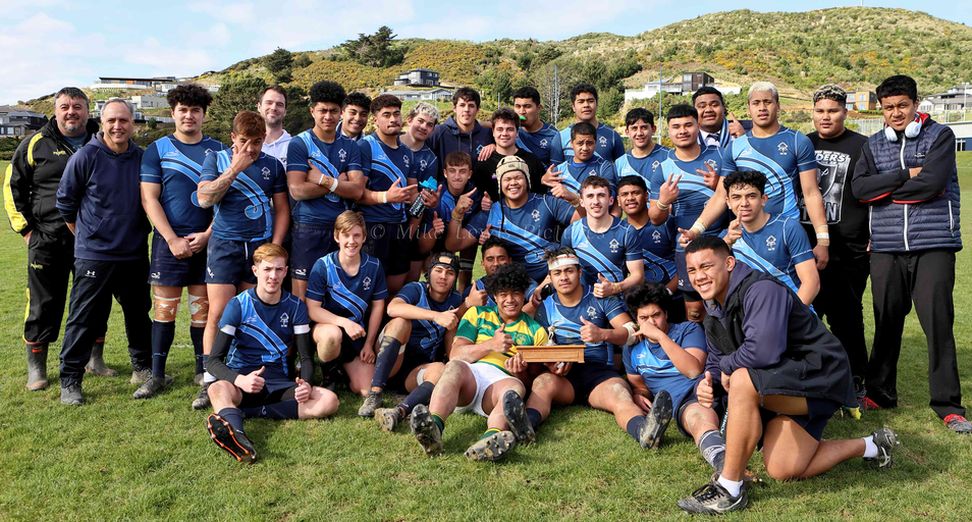 Aotea College has successfully defended the Beard Trophy with a 26-8 victory over Mana College.

The first half was a tense affair with little separating the teams. Aotea seized the initiative after the break peppering the visitors try line, three times held up over the whitewash and denied points when winger Shaun Wilson stepped into touch.

With Mana wobbling on the canvas, Aotea finally delivered a knockout blow when first-five Brayden Kamana slipped through the exhausted defence, swiftly scooting left from a midfield scrum five-metres out.

With a strengthening set-piece and growing confidence in the back-division, Aotea struck again through powerful centre Owen Wright. Multiple phases saw Mana backpedaling inside their 22 and a hole opened for the Wellington age group representative (see clip of this try below).

In a match that doubled as a Premiership sixth round fixture, Aotea collected a four-try bonus point following an intercept by Kamana at halfway.

Mana’s resistance wasn’t completely shattered, and they had the last say when tighthead prop Jayden Smith bustled through heavy traffic to cross the paint in the far corner.

Mana opened their account with a penalty to Jacob Duncan, but it was Aotea halfback Jack Tibbitts celebrating the first try midway through the first spell. Aotea won a lineout five metres out and drove strongly before suppression. Aotea kept their cool hammering open side and breaching when the diminutive nine swopped into a gap.

Both schools struggled with discipline and continuity at the breakdown, but proceedings were far from dull. There were several partial breaks that briefly heightened excitement but didn’t threaten the scoreboard. Aotea fullback Nonu Sakaria was slippery while Mana right-wing Michael Suipolu was busy and tough to stop.

The halftime score could have been 7-6, but Baker missed a handy penalty that resulted in confusion between the tough judges and was ruled out assertively and correctly by referee Scott MacLean.

Mana was hearty with captain and openside Jack McMahon at the heart of the scrap. Lock Lipa Saveatama is a formidable unit but needed more ball to have an effect. Prop Villi Cegumalua had some lively moments and held firm at loosehead.

Aotea skipper and blindside Brooklyn Tapusoa administered some brutal tackles and D’artagnan Wesche-Fanueli is as big as the name suggests.

This weekend is Round Six of the Premiership which means two-thirds of the round-robin will be completed.

If the top of the table Scots College beat St Pats Town and second-placed St Patrick’s College, Silverstream deal to fifth-placed Rongotai College it’s hard to think there won’t be a repeat of the 2019 final. However, fourth-placed St Bernard’s College will seek their fifth win of an excellent 2020 when they travel to Wairarapa College. Wellington College hosts Tawa College with each school on a solitary win each.

Nice work in the backs for this try. @aoteacollegeofficial retained the #BeardTrophy with their midweek 26-8 Wellington Premiership win over Mana College.