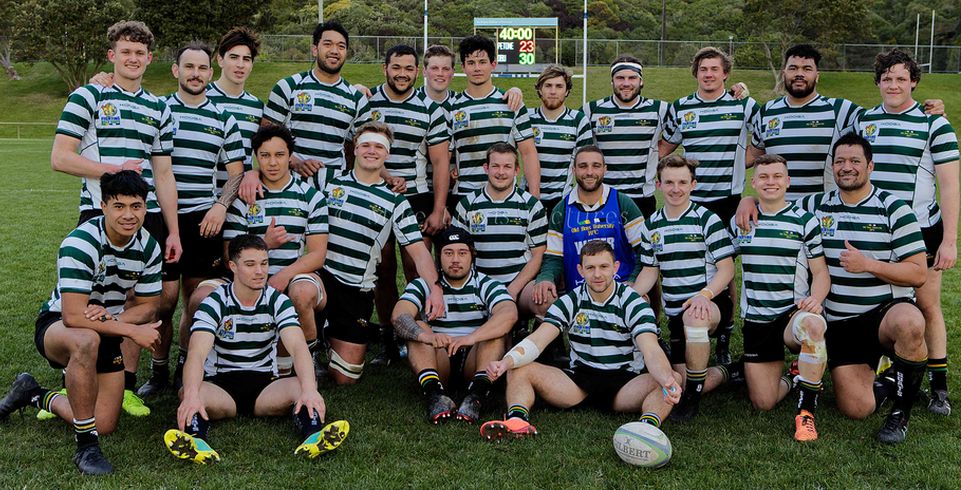 The winning OBU Goats team after today’s game against Petone.

There were pyrotechnics in the Swindale Shield late this afternoon when both the Old Boys University Goats and the Upper Hutt Rams sealed death-knock victories over their opposition in the 10th round set of matches, played in fine, breezy conditions throughout the Wellington region today.

In a top-of-the-table clash at neutral Jerry Collins Stadium, the OBU Goats beat Petone 30-23, courtesy of a winning penalty to first five-eighth Callum Harkin with a couple of minutes to play and then a match-sealing try out wide on the fulltime whistle. The win propels OBU to the competition lead with just three weeks to play before the Jubilee and Hardham Cup semi-finals.

These two thrilling wins offset the rest of the day’s play at other venues that was generally high scoring and often one-way traffic.

Wainuiomata beat winless Johnsonville 34-10, while the other four games saw the winning team post at least 50 points and almost 100 at one venue.

Meanwhile, the leading two teams both dined on big wins in the Premier Reserve Harper Lock Shield. Unbeaten Norths put away Paremata-Plimmerton 67-8 and Marist St Pat’s powered past Poneke 54-10, in a match that saw the home side’s manager banished from the sidelines.

Petone Blue consolidated third placed on the standings with a hard-fought 13-11 win over Old Boys University, ahead of a three-way deadlock on the points table for fourth placed between Tawa, HOBM and Poneke.

In the Paris Memorial Trophy Colts competition, defending champions and leaders OBU Green beat Petone 45-12, to open up an 11-point lead over Petone at the top of the standings after eight completed rounds.

Like in the Premier Reserve competition, there is now a three-way tie for third place behind OBU and Petone after today’s results, with both Norths teams and HOBM currently vying for the other two semi-final spots.

Norths Blue took a 36-24 win over the Norths White on Friday night, while HOBM Green beat the Upper Hutt Rams in a second match on Friday under lights at Maidstone Park.

In one other Colts encounter today, OBU Black beat Johnsonville 57-15, whilst the Poneke Colts took the points from their win over Wellington by default and Tawa had the bye.

In a round-up of some of the Swindale Shield this afternoon,  the Upper Hutt Rams scored through blindside wing Hokianga Morunga and fullback Scott Svenson slotted the sideline conversion to give the Rams their one-point win over the HOBM Eagles.

The Eagles had dominated much of the early part of the game but the tenacious Rams held on to keep in touch. The Eagles were left to rue a lack of discipline in the second half as they led 17-15 deep into the game. The Rams kicked a penalty to move ahead 18-17, before HOBM replacement prop Rei Manaia scored what was seemingly the winning try before a series of pick and goes led to the winning try.

At Jerry Collins Stadium, Petone held a slender 23-22 lead with barely two minutes on the clock. But OBU won a penalty and flyhalf Harkin stepped up to put them in the lead at 25-22. The Goats sealed their late win with a try out wide with the last play of the game.

Earlier at Porirua Park, Petone led 13-12 at halftime, despite two tries to OBU fullback Sam Reid. Petone halfback Logan Henry kicked two penalties to put his side up 6-0, before OBU wing Reece Plumtree reeled in a cross-kick and offloaded to Reid to score the first try of the match. Petone moved ahead 13-5 when No. 8 Tupou Sopoaga scored from close range, before Reid bagged his brace at the end of the half after a strong scrum and charging run by second five Izzy Foai.

The Goats scored a key try just after the break, winning a penalty and in-form No. 8 Shamus Hurley-Langton finding the whitewash. Petone hit back through right wing Tom Carter after a searing run by centre Willie Fine. OBU kicked a penalty to lead 22-18, before Petone scored again, through Henry, to take one-point lead heading towards fulltime but Sopoaga was sinbinned and they were unable to hold on.

At the other end of the scoring charts was Northern United, whose dominant forwards and scrum set the platform for their backs to run rings around Paremata-Plimmerton and win all too easily in front of a sizable crowd lining the outside of the far side of Ngatitoa Domain.

The home side started well, but when second five Kienan Higgins linked with fullback Johnny Teleaga and then flyhalf Sam Clark scored to put Norths up 12-0 after 25 minutes the signs were ominous. So it proved, as Norths quickly scored their third and fourth tries and then scored their fifth –  and third from first phase off a scrum  – as left wing Luke Bowden crossed to make it 33-0. Right wing Losi Filipo then scored off a Clarke stab kick to conclude the first half.

The Garden-Bachop brothers, Jackson and Connor, came on in the second half as Norths try-scoring continued unchecked. Among the second half scorers were No. 8 Luca Rees, flanker Parekura Lalaga and Filipo again, while a Jackson Garden-Bachop cross kick out wide from a penalty that led to a try was a highlight.

At Kilbirnie Park, Marist St Pat’s pulled away from Poneke to win 50-18, after leading 31-18 at halftime after two first half tries to second five-eighth Isaia Petelo. Best and Fairest leader Aidan Morgan scored a long-range intercept try to put MSP up 38-18 early in the second half, followed by two more tries to seal the win and the Horan-Millar Trophy.

At Helston Park, Wainuiomata weren’t really troubled in beating Johnsonville 34-8, but were hardly overly convincing either. The visitors were efficient rather than spectacular as they squeezed down the home side scoring twice through Tyler Tane and Jason Love before the Hawks got on the board through an Andy Ellis penalty; but after Johnsonville lost a man to the bin Wainuiomata profited with Teru Time making it a third on halftime.

Johnsonville were the better side immediately after the resumption and were rewarded when fullback Niall Delahunt crossed and had a sniff of an upset, but Wainuiomata closed matters out with a fourth try, and extended matters with a late double to Eden Monu that blew out the scoreline. Time and Delahunt were the outstanding performers for their respective sides, Jordan King made no poor decisions but was dragged after 45 minutes, and Kauri Aupouri excellent in his first Premier start.

At the Polo Ground, Ories sauntered past the winless Avalon Wolves 66-0, while Tawa dispatched the Wellington Axemen 56-0 at Lyndhurst Park.

St Pat’s Silverstream and Scots College maintained their place at the head of the First XV Premiership with big wins today. Stream overran Mana 76-5, while Scots went one point better on downing Tawa 84-12. Town – who play Scots next week – were also decisive winners 74-7 over Wairarapa. The only close game of the day was in Lower Hutt where St Bernard’s followed up their first win over Wellington College in 19 years by beating Aotea 27-15.

In Premier 2 Upper Hutt maintained their lead in overrunning Kapiti 69-0, while the Silverstream 2nds kept in touch but only just in edging their Town counterparts 26-24. HIBS were also narrow winners 17-14 over Paraparaumu, with Porirua convincing 31-8 winners over Wainuiomata.

Upper Hutt's winning try. Rams beat the Eagles 25-24 in the last play of the game. The conversion secured victory for the home team. Photo courtesy of Joe at @Tackld The result was a reversal of what happened between these two teams in 2014 #clubrugby #rugbyunion #nzunion #tackld More stories, videos and photos from a dramatic weekend of Swindale Shield rugby to follow.