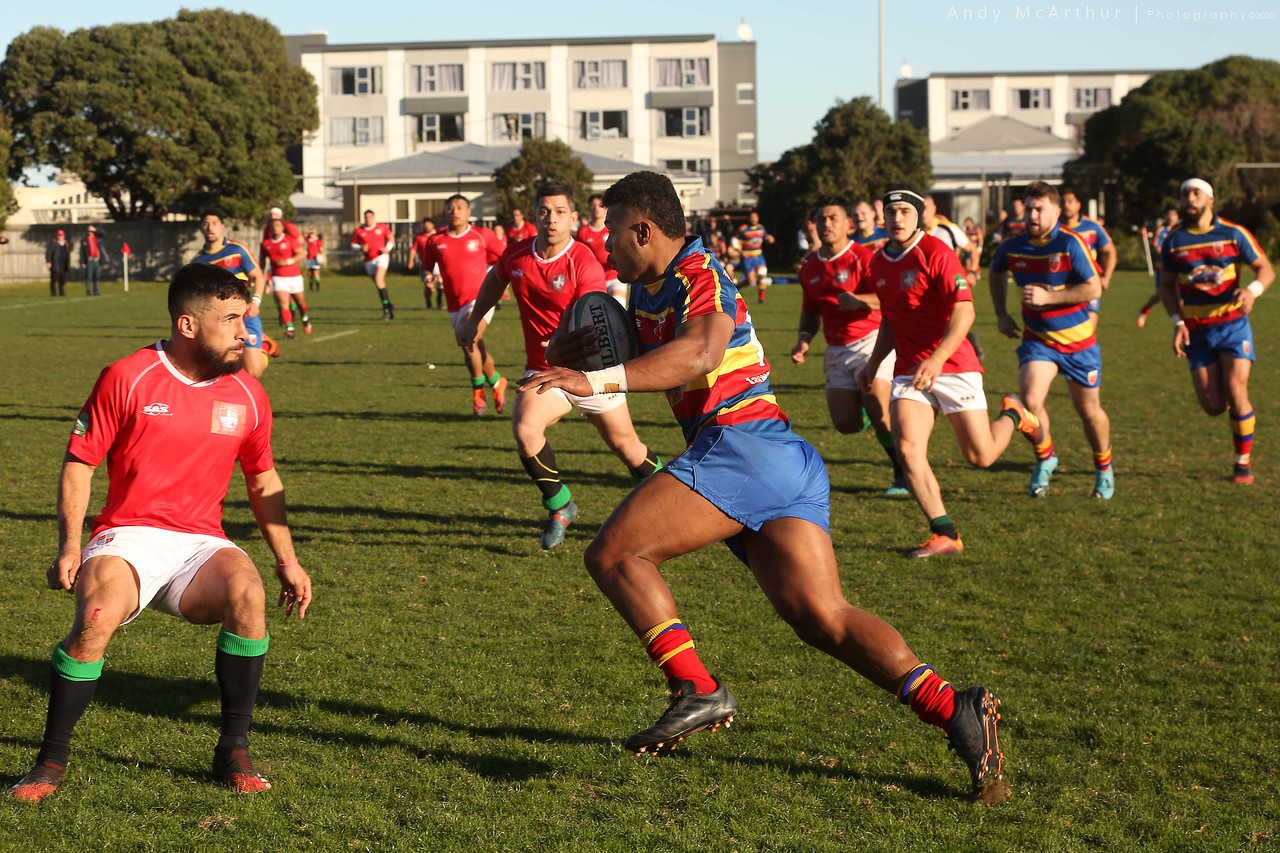 Above: Romu meets Ryan.  Senileba’s Tawa returns home tomorrow to host Wellington for the Alan and Murray Mexted Cup, while Setefano’s Marist St Pat’s crosses the road to face Poneke for the Horan-Millar Trophy, in the 10th round of the Swindale Shield.

UPDATED: After last weekend’s aborted events, rugby returns in full this weekend though restrictions on number of attendees still apply; hopefully that ends after this weekend.

At the sharp end, it’s business time with six teams still realistically in the hunt for those top-four places with the other eight teams looking to spoil their ambitions and improve their own positions in the table.

One milestone on the Premier front, with Upper Hutt Rams hooker Eli Hunt named to start in his 100th outing for the Maidstone club. Our congratulations to him/

In terms of the points table, there’s no bigger game tomorrow than that between second-placed Old Boys-University (37) and leaders Petone (39) at neutral Jerry Collins Stadium at 3.00pm. Both sides will be safe in knowing they can’t drop out of the top four with a loss, but equally that a loss will likely scupper their Swindale hopes while a win will put them firmly in the box seat.

Predictably, both sides are at or near full-strength. The big talking point in the Goats lineup is the absence of regular pivot Dale Sabbagh through injury so Callum Harkin will again deputise with Ty Poe coming in and a backline reshuffle. Up front Jonathan Fuimaono, James Poloniati, Caleb Delany, and Paddy Carter all return. Petone lost Vern Sosefo, Josh Houston-Tupou, and Ben Brooking to injury last week; the latter pair are replaced in the starting side by Jarrod Hrstich and Tom Carter, with Niko Manaena, Iona Apineru and Mateaki Kafatolu all elevated to the starting side.

There are two trophies at stake in this match, with each side currently holding one. OBU will defend the Bill Brien Challenge Trophy and if they win they’ll lock it away at the Cambridge for the season as their final three Swindale games are away from home. Petone hold their interclub Marc Verhoeven Memorial Trophy after their 23-12 win at the Rec last season. Nicknamed ‘Alby’, Verhoeven was a former Wellington captain who played for and captained both clubs, and who’s death in Australia in 2011 after complications during surgery aged just 50 shook the rugby community.

In terms of passion though, there isn’t a bigger game than the meeting between Poneke (21) and Marist St Pats (35) in the ‘Battle of Kilbirnie’, which this year is at Kilbirnie Park, and only the strip of asphalt of Evans Bay Parade separates the two clubs. Expect it to be a willing and physical encounter! Injuries and absences continue to be a problem for Poneke, with Galu Taufale, Mario Counsell, Andrew Jones, and Jimmy Hewitt all missing this week, replaced by Hauwai McGahan, Jordan Hoerara, Patrick Sitagata, and Johnny Tooala respectively and they’ll be relying on that passion and desire to get one over their rivals to get them over the line as much as anything else. MSP have perhaps more to lose in the bigger picture given their place in the top four and rattle off a bunch of changes with Tyrone Thompson, Ryan Dafel, Tom Horan, Ben Stephens, and Jay Cameron all starting, with no Valentine Meachen nor James or Billy Proctor for them.

The trophy on the line between the two clubs commemorates two great rugby men. MSP’s Mick Horan and Poneke’s Ken Millar were great rivals on the park but equally great mates off it, with the pair passing away within months of each other in 1982. Poneke are the holders having won 25-21 last year.

Hovering through are three sides looking to take any advantage of what transpires in those two matches. One is Norths (34), who make the short journey north across the bridge to Ngati Toa Domain and Paremata-Plimmerton (13) where five points will be the aim. They’ve given several players – Gerard Faitotoa, Bruce Kauika-Petersen, and Junior Time-Tautoa mainly – the week off, but it’s still a strong looking side which includes Luke Bowden playing his blazer game, and bench places for both Jackson and Connor Bachop. This weekend marks the start of a brutal stretch to finish for the Hammerheads, who take to the road for matches against MSP, Petone, and Tawa to finish. Perhaps with that in mind it’s another slightly changed side, with Kayden Muller moving to centre and Justin Wilson into first-five where he’ll captain the side in the absence of regular skipper James Corcoran.

They’ll play for both their Pirikawau-Parai Trophy – donated by the Ngati Toa iwi – and Ivan Hardgrave Trophy; Hardgrave was a Porirua City councillor for many years and an administrator at Titahi Bay before the merger and at Norths afterwards. The trophy has been played for under several different formats but is now contested between the northern city’s two clubs. Norths have won this every year since Pare-Plim’s return to the Premier ranks, with the latter’s last success coming in 2014 against Norths’ second side in the old Senior 1 grade.

The only one of these three at home is Tawa, who are back at Lyndhurst after last weeks loss to MSP. The opposition are Wellington, with the Axemen is a perhaps slightly fresher state after the early end to their match last Saturday and an upset win for them would be an almost fatal blow to the home side’s title hopes.

Tawa are largely unchanged, though there are returns for Ben Aumua-Peseta, Hemi Fermanis, and Luke Cummings, while their bench includes Randall Bishop who has rejoined for the balance of the season with the Horowhenua-Kapiti competition having finished last week. Wellington have even fewer changes; Ben Kalin comes in in place of Sam Gard’ner and Satch Pryor returns at centre. Their interclub trophy is the Murray & Alan Mexted Cup with family name synonymous with both clubs. The two last met in 2018 when Tawa won 51-30.

On the other side of the Haywards, Hutt Old Boys Marist head up the road to face the Upper Hutt Rams at Maidstone Park. Even after impressive wins in the past two weeks they still find themselves outside that top four which must be frustrating but simply, they must keep winning. The Rams are out of contention for those places, but equally still have hope themselves of making those next four places which will contest the Hardham Cup and will also play this week in memory of club Life Member Harry Kerr who passed away last Sunday.

The home team bring back Tyler Graham, Josh Dewar, and Craig Brown with Jack Wright moving to No8 with Murphy Taramai no longer available to them. HOBM do still have the services of Chase Tiatia who’ll again be at centre, while Pakai Turia and Glen Walters swap places and Brandyn Laursen returns after missing last week.

At the Polo Ground Oriental-Rongotai are in the last-chance saloon, seeking some form of miracle to get them into the top-four and after keeping Johnsonville winless last week, albeit just, they’ll be looking to do the same to Avalon this time out. Young hooker Penieli Poasa starts in his 50th match with captain Tuakana Metuarau, Manu Maihi, Connor Lemon, and Tuga Mativa amongst those returning. Avalon though make a handful of changes to their side as they hope their fortunes change, with veteran Akuila Alatini and Phil Green given starting roles in the forward while their backline his heavily revised from that that started against Pare-Plim and is without their main strike weapon in Chris Aumua.

Finally, after going close in recent weeks, is tomorrow the day that Johnsonville finally get over the hump? It won’t be easy, even on home turf at Helston, with Wainuiomata the visitors and looking to put together a good performance themselves even with the top-four now beyond reach. The Hawks are without some players who stood out last week so they’re much changed; for instance Niall Delahunt drops to fullback and Andy Ellis moves into midfield. The visitors have TJ Va’a back after he missed last week and goes start back into first-five with Josh Robertson-Weepu reverting to fullback. Kauri Aupouri makes his starting debut in midfield with the “young and old” pairing reunited in the engine room with Zamian-Ray Blake joining 150-gamer Dan Cherry.

There’s slight changes to kick-off times this week, with some matches pushed back to a 3pm start.

Its status quo after last week’s abandoned round, with WRFU announcing on Tuesday that the missed games will not be played and all teams will receive three points as per the bylaws. That’ll be good news for some teams and bad for others in terms of the chase for finals places. Leaders Norths (42) should maintain their unbeaten record at Ngati Toa against ninth-placed Pare-Plim (16), but behind them second and third meet at Kilbirnie Park when Poneke (34) hosts MSP (37), as do fourth and fifth when OBU (30) meet Petone (31) at Porirua 2.

The remainder of the top eight sides – there’s an eleven point gap between Ories and Pare-Plim – will be looking to keep their push going with Tawa (29) hosting the Petone Brotherhood (8) at Lyndhurst, Ories (27) at home against Avalon (12) at Polo, and HOBM (29) making the short trip to Delaney Park to face Stokes Valley (13) in the only late kickoff. The remaining fixture is at Helston with Johnsonville (14) facing Wainuiomata (8).

As with the Premier grade, times are slightly altered this week.

The highlight clash of the Colts round is the match at the Petone Rec tomorrow between unbeaten pair OBU Green and Petone which could yet be a finals preview, and includes a somewhat rare achievement with OBU’s Tom Hoskin to captain the side in his 50th match for the team. The sides trailing them are in action tonight with the two Norths teams meeting at Porirua Park, and HOBM heading up SH2 to the Maidstone artificial and a clash with the Upper Hutt Rams, and the remaining fixture has Johnsonville hosting OBU Black at Newlands Park.

In the Under 85s the Upper Hutt Rams have already secured the JC Bowl with two rounds left and will be favourites to continue their unbeaten record against Poneke at Kilbirnie. The remainder of the round has Avalon travelling to take on the OBU Scallywags at Kelburn Park, MSP and Wests meet on the St Pats Turf, and HOBM welcome Wellington to the Hutt Rec.

Just four matches on in the Premiership tomorrow, with Rongotai College haven’t continued Wellington College’s run of misery by winning their Traditional 27-20 on Wednesday. After having faced Scots last round, things don’t get easier for Mana has they take on the other unbeaten side in Silverstream out in Upper Hutt. Down the valley St Bernard’s are at home for the visit of Aotea, Wairarapa make the haul into the city to face Town at Evans Bay (at 1pm), with Scots heading out to the northern suburbs for a meeting with Tawa.

In Premier 2 the leaders are Upper Hutt and they hit the road to venture up the coast to take on Kapiti, Wainuiomata host Porirua in a midtable stoush, and at Trentham racecourse Hutt International face Paraparaumu. The fourth match has an early 11.30am start for the Town and Silverstream 2nd XV’s at Evans Bay.  All matches are at 2.30pm unless stated.

There’s also the first of the year’s titles being decided, with Wellington College hosting Silverstream in the final of the four-team Under 80kg Arthur Reeve Cup at 1pm.