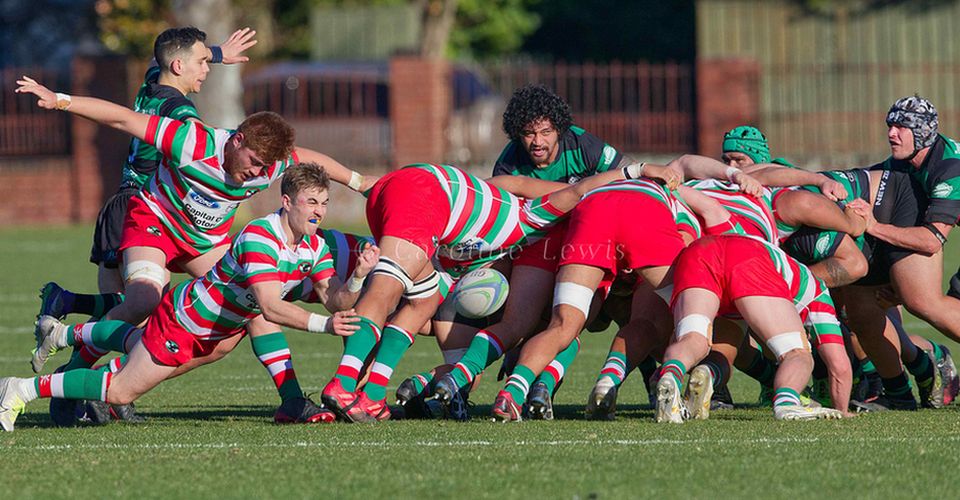 Nine weeks down and four to go before the Jubilee Cup semi-finals. Here’s hoping we get there!

A couple of high-profile matches headline the coming week’s round of the Swindale Shield, with Old Boys University hosting Petone in a top of the table clash (venue TBD), with Poneke and Marist St Pat’s meeting in the Battle of Kilbirnie. Both OBU and Poneke are scheduled to host their Old Timers’ Days this coming weekend, so blockbuster games for both.

Tenth round matches this week at a glance are:

Looking further ahead, there’s only two matches between the current top six after this coming week. HOBM host OBU next week, with Norths and Petone meeting in the final round.

Our item last weekend about non-Wellington signed Hurricanes players generated plenty of response to Club Rugby HQ, with limiting teams to one player per match being a favoured view. There was also the suggestion that the decision of who plays where is being left solely to Hurricanes GM of Rugby Ben Castle without WRFU oversight, which if correct seems beyond reasonable belief.

Further afield, the grumblings about allocation of Academy and newly-signed Lions players continue to grow, including an Instagram story post by Avalon’s Scott Waldrom. Keep an eye out for an opinion piece from Club Rugby in coming weeks.

TJ Perenara made a rare appearance for his beloved Norths on Saturday, coming off the bench and scoring a try in their win over Poneke. Nothing untoward in his absence from the Hurricanes, with it understood that the birth of his and his wife’s first child is imminent.

The Norths Colts side supporting their Premiers on Saturday.

With the Women’s competition having wrapped up on Saturday, Pride coach Ross Bond named a 49-strong wider training group for this year’s Farah Palmer Cup which will be whittled down to 35. Champions Ories lead the way with 14 with every club bar Avalon represented; Norths have nine named and MSP eight with Rebekkah Carter Poneke’s lone inclusion. One interesting name is OBU back Georgia Daals, back after an extended period overseas.

The Pride are due to kick off their campaign against Otago on September 5, but with the start of the North Pool of the competition this weekend already pushed back by NZR due to the current COVID-19 alert levels that would be anything but set in stone.

Wellington’s Premier club rugby competition might have a few more weeks to run, but other provinces are already wrapping up.

Manawatu moved their finals up to Friday night to beat any change in the Covid levels, with Kia Toa taking the Women’s title by beating Feilding OB-Oroua 39-27, and Feilding Yellows retaining their crown by holding off Massey to win 27-24.

In Taranaki Tukapa are the season’s top dog after beating Inglewood 33-29. Read the report from the Taranaki final HERE

In Horowhenua-Kapiti Otaki’s Rahui – who didnt even have a senior team a few short years ago – won the Ramsbottom Cup 26-25 over Shannon.

Scots College and St Pat’s Silverstream are the two unbeaten teams on a maximum 20 points after four rounds. This coming weekend, Scots plays Tawa College (away) and Silverstream plays Mana College (home). Both will be favoured to continue their bonus point winning ways. Scots and Silverstream are scheduled to meet in round 8 (the penultimate round) on 12 September.

The fifth round of the competition is scheduled to kick off this Wednesday, with Rongotai College hosting Wellington College in their midweek traditional. If this goes ahead as planned, Club Rugby will endevour to cover this game.

Junior rugby was cancelled on Saturday because of COVID-19. Of course, it turned out to be the sunniest day of the season.

Kudos to ‘Tank’ who ensured only those invited were able to get into the Polo Ground for the women’s decider. The big fella blocked the little alleyway between the clubhouse and the ground. Typically, he keeps the wild safe at godforsaken hours at crazy bars on Allen Street. An early start on Saturday for a true Wellington legend.

Only Ories and OBU managed to covert more than half of their tries in the women’s premier rugby season.

This photo (right) of Matt Sleith has gone viral. What is the context? The starting Old Boys University flanker opened the gates at Ian Galloway Park (The Cage) allowing the ambulance to reach fallen OBU player Josh Thomas after he broke his leg. Thomas was prone so long the game was abandoned early in the second half with the students leading 17-0 just after halftime. Matt Sleith – A good bugger.

Disappointing some Premier clubs continue to publish misinformation in regards to jersey numbers confusing spectators and reporters. Club Rugby endeavors to present the most accurate accounts of the game and that’s tough to do when for example, and despite checks, the North’s women’s team appears with the listed 7 in 4, two 9’s and a 23, 24 and 25. Those numbers don’t even exist on the website.

Re the NZR draws and results app, if it ain’t broke, don’t fix it. So perhaps its back to paperwork next season in collecting and collating results and team scoring?

A milestone for probably the oldest bloke going around in Premier rugby, with Wainuiomata’s “40-something” Dan Cherry racking up his 150th game for the side, on top of many many others for their other teams (see Instagram below)

Pare-Plim’s Jayden Keats played his 50th in their win over Avalon.

An embarrassing victory celebration for the Crusaders raises a few questions.

Why did they have to tackle the trophy after successfully tackling everybody else?

Oliver had too many Jager bombs?

Do the repairs have to go through insurance conglomerates?

Did Laumape gate crash the party?

Do the Hurricanes lose a bonus point after being disallowed three tries to nil against the Highlanders?

The Crusaders damaging the Super Rugby trophy is far from the first incident of trophy damage or mismanagement of a prize by a successful team in sport.

After winning the Stanley Cup in 1999, members of the Dallas Stars headed to Vinnie Paul’s (drummer in wild heavy metal band Pantera) house to celebrate the victory. After a night of rowdy partying at about 5am Guy Carbonneau threw the Cup from the roof of the house towards the pool but missed creating a dent that still exists to this day.

Shortly after winning the Football World Cup in 1966 the trophy was stolen in England. It was found wrapped in newspaper lying by the front wheel of a car in Upper Norwood, South London by Pickles, a border collie, whilst out walking with his owner.

On 14 March 1996, a man entered the Royal New Zealand Yacht Squadron’s clubroom and damaged the America’s Cup with a sledgehammer. Benjamin Nathan, was charged and found guilty of criminal damage and sentenced to 34 months imprisonment (reduced to 18 months on appeal).

In 1988 after Scotland lost 9-6 to England at Murrayfield, the Calcutta Cup came in for some rough treatment as Scotland’s John Jeffery (‘The Great White Shark’) and England’s Dean Richards (a policeman in the real world) kicked the 110-year-old trophy down Edinburgh’s Princes Street. Jeffrey was banned for six months and Richards for one match. Scotland prop Norrie Rowan said: “There was nothing malicious, they were just passing it around like a rugby ball, but because they kept on dropping it, it just got really bent.

In 2009 Alex McNeil admitted in the Wellington District Court he stole the Ranfurly Shield by walking off with it from Wellington’s Dockside Restaurant & Bar during a charity auction. He later videoed himself at his flat celebrating with rugby’s famous Log o’ Wood. He was a Counties fan. Counties have never won the Ranfurly Shield.

Other local examples include Marist St Pat’s summoning a Police dive squad to retrieve the Jubilee Cup from the bottom of Lake Taupo after a fishing trip gone wrong and Petone junior Rory Woollett taking off with the McBain Shield returning it after the threat of police intervention.

Everyone has the fire, but champion teams know when and how to ignite the spark. • Congratulations to our mighty Women’s team who have finished off the year as they started – Champions. • Well done to our ladies, coaches, management and support staff. Malo lava. Thank you for your love and service to our family and for always TAKING THE O WHERE EVER YOU GO! We love and appreciate you all. • OTIDE! Where the “O”rdinary player is made Extra”O”rdinary. • #SmallClubBIGFAMILY #OnceAnOrieAlwaysAnOrie #MoreThanAclub #TakeTheOwhereEverYouGO • ? FINAL SCORE ? 64-12

No spectators at rugby matches on Saturday, on the anniversary of the day of Wellington rugby’s largest ever crowd.

On 15 August 1959 an estimated crowd of 60,000 but revised down to 59,000, packed the old Athletic Park to watch the All Blacks defeat the touring British Isles 11-8 and go two nil up in their four-Test series.

Just a fortnight earlier a crowd of 47,000 had witnessed the Wellington Lions go down gallantly 6-21 to the British Lions. The All Blacks had also won the first Test in Dunedin – but only just 18-17 – so this was going to be big.

Club Rugby does not condone gambling, but this article HERE on Radio New Zealand is disturbing, in that if Class 4 gambling goes then so does community sport funding. So a new alternative would need to be found?

Aisle be Back: Super Rugby kicks off, Hurricanes to play Stormers in season opener