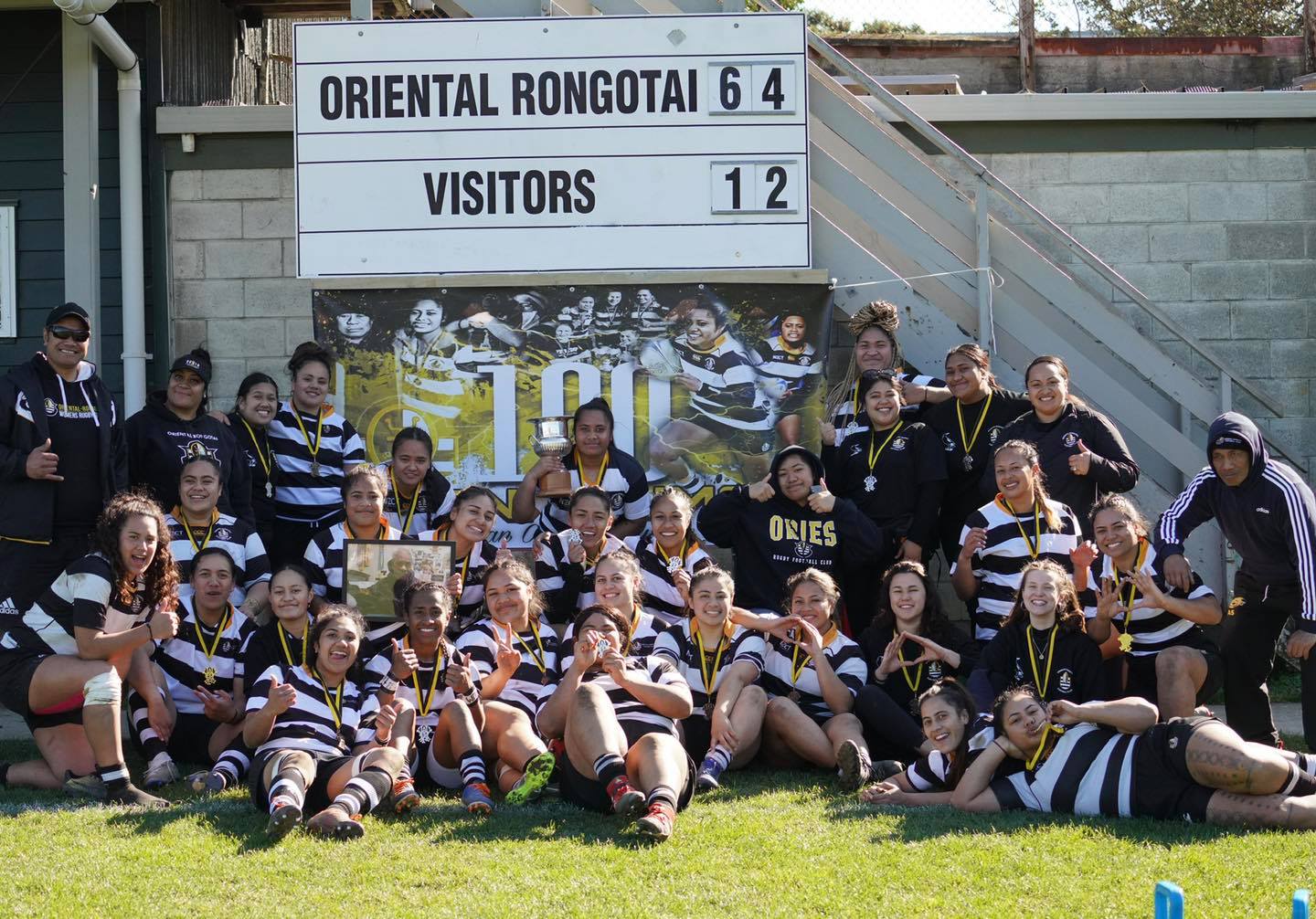 With a combined tally of 35 first and second-round championships, five Black Ferns, 15 Wellington Pride representatives and unbeaten records this season the last round Premier Women’s match between Ories and Norths to decide the Rebecca Luia’ana trophy, and effectively the Wellington women’s Premiership in 2020, was expected to be a blockbuster.

Instead, it was another Ories procession as the Magpies stormed to a 64-12 victory at the Polo Ground.

The try to bring up the half-century was the most vivid metaphor for the complete dominance of the ‘Miramar Magicians’.

Norths launched an exhausting assault inside the hosts’ 22 only to be penalised for hanging on to the ball a meter short of the try line. Lock Joanah Ngan-Woo, who secured the turnover, audaciously tapped and strode with every fiber of her being to halfway. Rundown on the northern touchline she recycled possession calmly and quickly as Ories swung to the opposite touchline where reserve wing Bernadette Robertson finished after only being on the field for a minute. Roberston is in the Wellington Pride.

Little wonder Ories won eight games on the trot by an average score of 69 to 1.5. They are simply awesome, though they did concede their first try in 580 minutes reducing their defensive wall from Level 4 to Level 3.

The damaging forwards set the platform for victory. Norths scrum crumbled under the combined might of the Taumoli sisters as Ories led 31-5 at halftime.

Disturbingly for the visitors prolific centre Ayesha Leti-I’iga was subdued, only touching the pill half a dozen times in the first half. That flaw was remedied with two tries in the second, though none were from past halfway which is typical fare.

First-five Amanda Rasch was arguably the player of the match with three tries, seven conversions and a display of total confidence and authority.  Second-five Faasua Makisi was equally solid with two first-half strikes.

Former Black Ferns blindside Charlene Gubb scored a try and should be a valuable addition for the Pride after a period in Australia.

Ories tenth and final try was the last play of the game and was scored by fullback Timena Tumaai celebrating her 100th appearance. Ories have won 85 of 95 games since 2014.

In other Premier Women’s games today, Petone got up to finish third with a 50-19 win over the Old Boys Impalas, while Marist St Pat’s drew level with Hutt Old Boys Marist (who had the last round bye) in fourth with a convincing 72-20 win over neighbours Poneke.

Paremata-Plimmerton finished their season in positive fashion with a high scoring 43-36 win over Avalon, to finish with three wins from their eight games.

Petone have skipped two points clear at the top of the Swindale Shield table after nine rounds of 13, after another high-paced round of matches played in perfect conditions around the Wellington region today.

Petone continued their good form of late, brushing aside the Upper Hutt Rams 58-12 at home to lead second placed Old Boys University after the Goats beat the Wellington Axemen 17-0 in their game at Ian Galloway Park that was called off early in the second half owing to a broken leg to left wing Josh Thomas and a long delay as medical officers arrived at the scene. Club Rugby wishes Josh all the best after this accident.

Marist St Pat’s, Northern United and Hutt Old Boys Marist were also the day’s big winners, and these three teams, along with Tawa, occupy positions third through to sixth and clear of the mid-table chasing pack.

Oriental-Rongotai‘s 24-18 win over winless Johnsonville at Helston Park was the closest margin of victory of the day, while Paremata-Plimmerton accounted for the Avalon Wolves 27-12 at Ngatitoa Domain.

Johnsonville seemed to be on track to beak their two-season losing streak when leading Ories 13-3. The Magpies closed to 13-10, but the Hawks scored another again to take a 18-10 lead. Ories crossed again, but Johnsonville still led 18-17, before evergreen midfielder Paulo Aukuso scored the match-winner with several minutes to play that also sealed the Ash Pointon Cup for them.

Paremata-Plimmerton kept Avalon winless and marred the Wolves’ Logan Blake’s 100th game. The home side started strongly with an early penalty to Justin Wilson followed within the first 10 minutes by a try to right-wing Jordan Clark. Sustained pressure led to a second and perhaps controversial try to flanker Shane Hedges before Clark had his second ruled out when it appeared he scored, but Pare-Plim notched a third just on halftime when winger Zane Ainslie crossed in the north-west corner. Down 22-0, Avalon needed a strong start to the second half and got it when Chris Aumua crossed, before a long period when neither side could take finish off chances they created. Avalon eventually scored from close range, before Pare-Plim put the result beyond doubt – and scored their first four-try bonus in two years – when Clark made use of every bit of his 6’4″ frame to haul in a league-style cross-kick from Wilson.

Leaders Petone were always in control of visitors the Upper Hutt Rams at the Petone Rec, outscoring the Rams eight tries to two and leading 32-5 at halftime. Former Rams hooker Josh Houston-Tupou scored their first try (and would score a second), and the Rams replied to trail 11-5 after about 20 minutes. But Petone would score through No. 8 Tupou Sopoaga from the next kick-off and then score twice more before the break through captain and flanker Jacob Gooch and fullback Piri Paraone.

It was game over when Paraone scored his second 10 minutes in the second half, followed by a runaway to replacement back Cam Ferreira. The Rams stayed in the game and were finally rewarded with their second try, but the in-form Villagers closed the contest and the Connolly Cup with two more tries including a long-range runaway at the end to left wing Tailah Love.

Petone are playing positive, attractive rugby at present, their only possible concerns from today’s game would appear to be injuries to prop Kaliopasi Uluilakepa and hooker Houston-Tupou who each exited the game in the 30th and 60th minutes.

Norths were in equally buoyant form in clearing out to a commanding 17-0 lead over Poneke in their Cyril Collett Shield clash, with flanker and captain Parekura Lalaga finishing off a big build-up and then from the very next kick-off halfback Esi Komaisavai scoring after a break and kick ahead by No. 8 Luca Rees.

Poneke replied with their first try, but wing Losi Filipo scored a third try for Norths to put them ahead 24-5. However, Poneke came back with two more tries including one on halftime to prop George Jacobs to trail just 24-17 at the turnaround.

Junior Time Taotua scored the first try of the second spell, but Poneke stayed in touch with No. 8 Cole Stewart’s intercept and 50-metre runaway. Norths introduced exciting young talent TJ Perenara off the bench after the break, and he helped Poneke clear out over the final 25 minutes.

Home side MSP cored the game’s first try for Marist St Pat’s against Tawa, but Tawa replied to close to 7-5 early. MSP would scored twice more to lead 21-10 at halftime. Both sides advanced their causes with converted tries in the second half as MSP led 28-17. Both sides struck for more tries but the home side was able to pull clear late. Second five-eighth James Proctor scored two of MSP’s five tries, with flanker James Tuiatua fullback Ryan Setefano and replacement wing Jay Cameron scoring.

The bulk of the First XV Premiership results went with expectations. Scots and Silverstream maintained their unbeaten records with Scots winning a 100-pointer 79-21 at home over Mana where the visitors played their part, while Silverstream prevailed 59-22 in Masterton over Wairarapa College. St Pats Town and Rongotai kept pace as well, with Town beating Aotea 64-12 and Rongotai coming out 52-21 winners over Tawa.

The match of the day was however at Wellington College, where St Bernard’s achieved a notable win in beating the hosts 26-20. But it was the hosts who started the strongest and crossed twice in the opening 12 minutes. Bernard’s responded with a try of their own before the first half settled into a stalemate that was only broken when College fullback Angus Cooper scored in the shadow of halftime.  St Bernard’s had curiously failed to use their size advantage in the opening 35, but made no mistake in the second as they battered a tigerish College side, scoring two tries to take the lead before College kicked a penalty. But the last say was with the visitors as tighthead prop Nonu Tuia – who had been denied earlier on – barged his way over for the winner. Tuia and No8 Jacob Laban were standouts for Bernard’s, captain Jono Little was effective in open play, and halfback Tana Rangiwhetu marshalled his side well. Cooper made some nice breaks for College, while captain George Sims led from the front, even operating at times as a fourth loose forward.

In Premier 2 Upper Hutt and the Silverstream 2nds firmly established themselves as the teams to beat. Upper Hutt were big winners over local rivals Hutt International 48-19, while Silverstream were even more emphatic in shutting out Kapiti by 57-0. Town won the match of the 2nd XV’s beating their Wellington College counterparts 42-19, while Wainuiomata edged Paraparaumu 24-22 up the coast in the closest match of the round.

A couple of #tries from Saturday's ninth round Swindale Shield match between @petonerugby and @upperhuttrams Petone won 58-12.