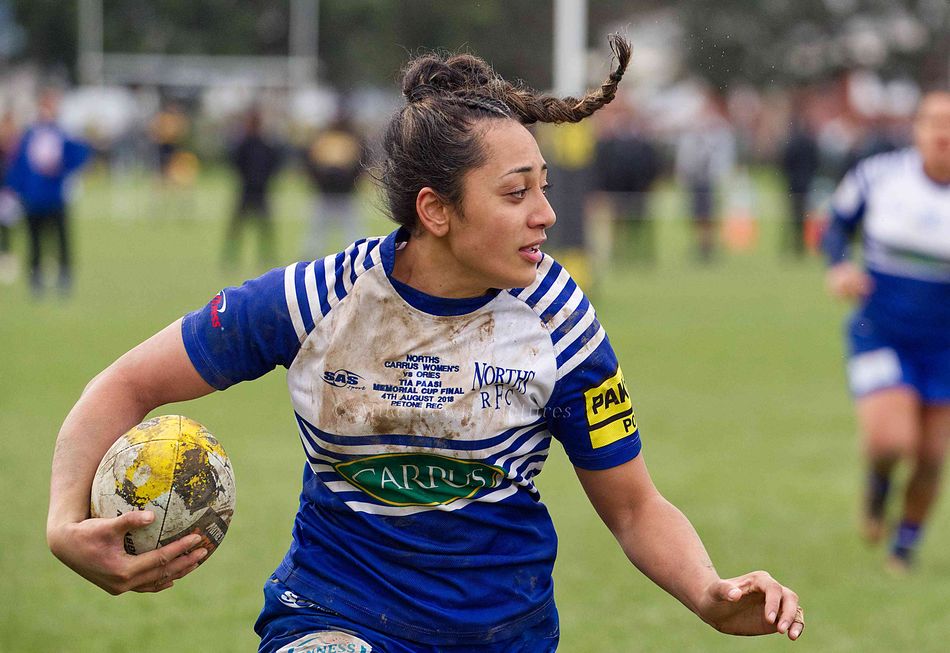 “We can’t play the game too early. We must stay in the present and have a clear mind backing our ability to pressure them. We are a good side and it’s a great challenge,” Dhys Faleafaga responded when asked how Norths can stop Oriental Rongotai in Saturday’s Rebecca Luia’ana Trophy decider.

With no final, the Wellington championship will be settled when the two unbeaten titans clash in the last round at the Polo Ground and the Rebecca Luia’ana Trophy will be presented to the winning team. The second round titles of recent seasons, the Tia Paasi Memorial (Division 1) and Izzy Ford (Division 2) trophies are in abeyance this year.

Norths have fashioned an impressive record with seven wins by an average score of 41-6. Ories have been in a different stratosphere outscoring all opponents 488-0. In last years Tia Paasi Cup Memorial final, they thrashed Norths 43-10.

“They haven’t been under pressure this year whereas we’ve had some moments of making mistakes and learning from them. We can’t play as individuals we must play as a team and if we do, we can put them under pressure,” Faleafaga observed.

A far from perfect moment for Norths was slumping to a shock 17-0 deficit against MSP last weekend. Two tries and three conversions from the bench by Dhys steadied a rocky ship, Norths eventually powering to a 41-24 victory.

Nursing a battered body has been a challenge for Faleafaga. Last year a hematoma on her quad resulted in overload on the knee and further injury. How has she overcome the adversity?

“Maintaining a good diet and getting the balance between family and study right has been important,” she responded.

The likes of Kolora Lomani, Sanita Levave, Dora Laupola, and Nina Foaese provide Norths with great balance. In fact, Norths chemistry has prevented Dhys from playing in her preferred position of loose forward.

“We have a number of girls who have played together for years so we don’t want to break their connection. I’m happy to play anywhere but I love being in the forwards at seven or eight,” she explained.

With 43 tries in 21 games, it hardly matters where she plays. In 2018 she was on the wing, scored a try and was named player of the match in the Tia Paasi Cup Memorial final which Norths won 20-15 against Ories.

“I remember being really nervous, but the girls were hissing that day. We were in the moment, not getting too far ahead of ourselves,” Faleafaga recalled.

“My try was scored in the corner by pinning my ears back. I remember falling short, but lucky for my long arms.”

Black Ferns wing Ayesha Leti-I’iga failed to cross the chalk that day, a rare feat for the sensational talent who has scored 130 tries in 54 games for the Magpies. Can Leti-I’iga be stopped?

“She’s amazing, impossible to tackle. We must stop the ball before it gets to her. Simple as that,” Faleafaga answered.

From a netball, touch, and volleyball background, Faleafaga is every bit as talented as Leti-I’iga. She attended St Mary’s College and was a member of the 2016 rugby program that won the National First XV top four and Condor Sevens titles.

Further acclaim followed when she was contracted to the Black Ferns Sevens. In 2019 she made her debut on the World Sevens circuit in Japan and featured in Canada and French tournaments, the North American tourney won by New Zealand.

“I felt like a bit of a superstar in Japan. It was unusual being recognised. It was incredibly special doing the haka and getting time on the field. The Covid stuff has been tough with no tournaments, but I’m grateful to have a contract. It’s a privilege training with the best players in the world.”

Dhys often trains with her sister Lyric (also a contracted player) at Jerry Collins stadium with a specialist program provided from Tauranga from the National high-performance set-up.

Ories against Norths kicks off at 11:30 pm on Saturday. Live audio commentary will be available on Club Rugby Facebook.

Dhys Faleafaga scores from the kick-off for Norths against Ories at the Polo Ground in July 2018.

Dhys Faleafaga scores against Auckland’s Southern Cross Campus in the semi-final of the National Top 4 tournament in 2017. St Mary’s won the title and Dhys was Player of the Tournament.