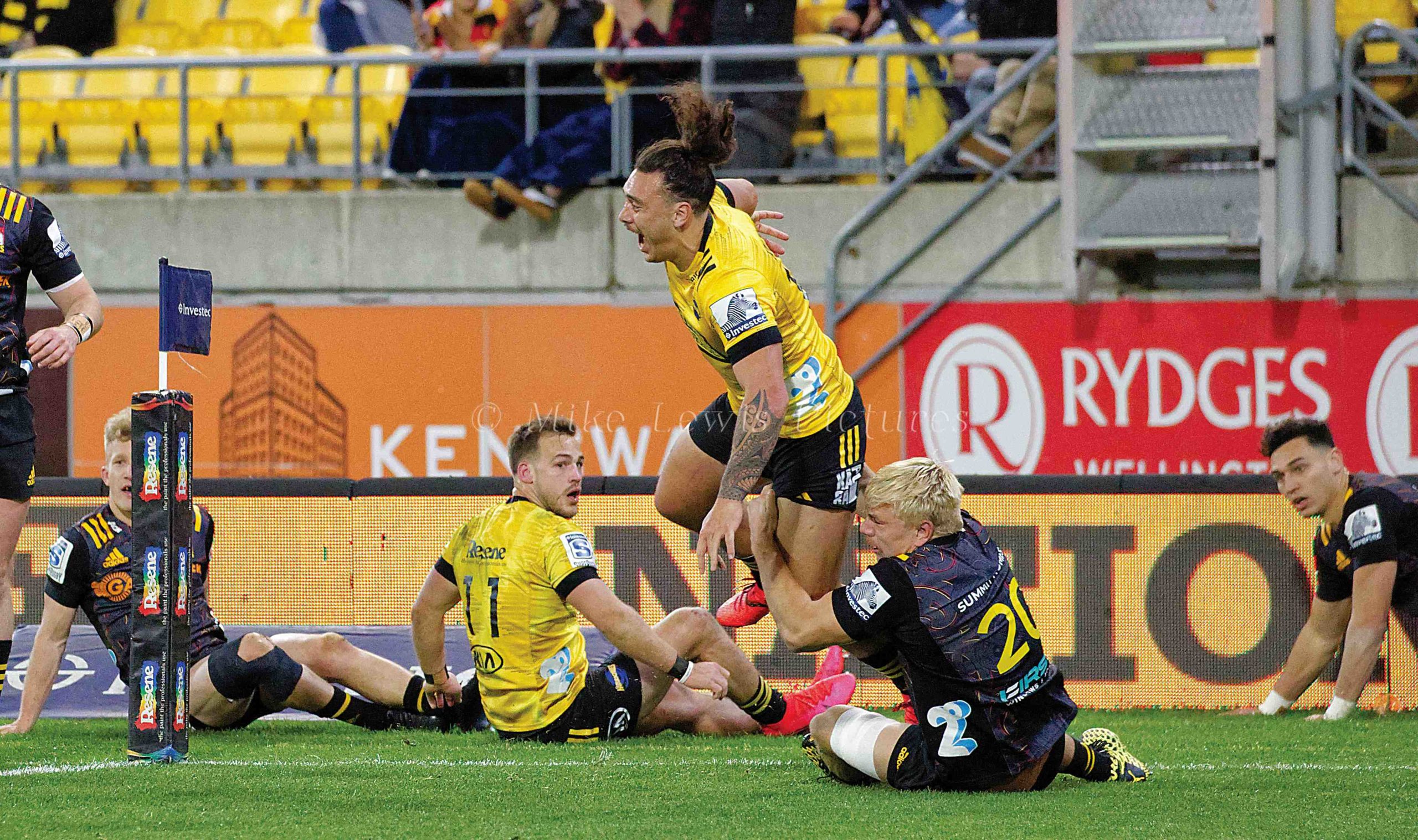 Above, Wainuiomata midfielder Peter Umaga-Jensen celebrates a try on Saturday, to the bemusement of those around him, including Old Boys University teammate Wes Goosen who was playing his 50th game for the Hurricanes.

Another big week of rugby starts on Wednesday with the next round of the Wellington Schoolgirls competition, a First XV traditional in Lower Hutt and the second match of the Beard Trophy series at Porirua Park.
Thanks to the Wellington Rugby Referees’ Association, these school games are:

Fast-forwarding to Saturday and it’s round nine of 13 of the Premier Swindale Shield. Games at a glance are:

Saturday’s rugby starts at the Polo Ground at 11.30am with the Premier Women’s decider between unbeaten Ories and Norths.

A wild day on Wellington’s south coast on Saturday – Short Passes was almost blown off the hill at the Attaturk Memorial on his annual visit, while paying respects to the Wellington and NZ soldiers, including two pre-war All Blacks, who were literally blown off Chunuk Bair between 8-10 August 2015. Lest we forget.

A cold, breezy afternoon at Kilbirnie Park, with a large walk-up crowd ringing the field for the Swindale Shield match between Poneke and Ories for the Jimmy Grbich Shield.

Then on to Wellington Stadium for some spectators dressed up in Hurricanes livery, and others who were actually playing in the game against the Chiefs, which was won well by the Hurricanes.

Great to see Hutt Old Boys Marist led out by waterboy Matthew Burroughs in full kit in his 100th match.

Some more player milestones this past weekend, including those already publisised such as Cole Stewart (Poneke) and Rei Manaia (HOBM) earning their 100th caps.

A stirring afternoon and early evening at H.W. Shortt Park on Saturday for Eastbourne’s Old Timers’ Day. The main match between the Eastbourne and Upper Hutt Rams U85kg teams was highly entertaining. On the field, the unbeaten Rams won 38-24, off the field the clubrooms were rocking afterwards.

Another head knock for Sam Cane. It’s not the first time. https://www.odt.co.nz/sport/rugby/all-blacks/canes-chilling-concussion-story

Why would the Chiefs not having won a game this season take penalty kicks at goal? Surely it makes little difference losing by one or by 50. A robotic rather than ambitious approach.

Short Passes understands that this coming weekend is the last round where non-Wellington provincial contracted players can play in the Wellington competition before ‘going home.’ This includes players such as Murphy Taramai, Chase Tiatia and Jonathan Taumateine, plus a couple of others such as possibly Tom Martin (Waikato). Although Martin is in Wellington for university not for professional rugby so not in the same boat as the others.

Short Passes also believes – but stands corrected – that each Premier team is allowed to field one Hurricanes-contracted Premier player in their match-day 22s on Saturdays who is also not contracted to Wellington. No problem that Chase Tiatia and Salesi Rayasi can play for their club of choice as they are clearly Wellington players, but could prop Jarred Adams have played for another another team not HOBM and the same team as the two backs? Who makes the decision which team he plays for? The player himself or the Hurricanes? Of course, in this instance, perhaps Adams is going to play for the Wellington Lions given that Xavier Numia and Fraser Armstrong are both out for the season.

Here’s a player move that goes against the grain. The Blues have signed Canterbury lock Sam Darry for the next three years. Darry is a former New Zealand Schools player and NZ U20 trialist and last year’s Canterbury U19 Player of the Year. Darry is also a past member of the Christ’s College winning Maadi Cup rowing team. He will still play his NPC rugby for Canterbury.

This coming weekend is also finals weekend in both the Taranaki and Manawatu club competitions.

In Taranaki, Tukapa and Inglewood will battle it out for the CMK premier club rugby title next weekend at the TET Stadium after winning their respective semi-finals on Saturday.

In Manawatu, the final is between Massey University and the Feilding Yellows, after Massey beat Kia Toa 31-12 in one semi-final and Feilding beat College Old Boys 25-18 in the other.

How’s this for a big hit… pic.twitter.com/ZFGBRmRqOt

After the news of Du Plessis Kirifi signing on for another three years, last week the Hurricanes re-signed Peter Umaga-Jensen and Asafo Aumua.

Playing rugby for Wainuiomata from the tender age of five, Umaga-Jensen is Wellington born and raised. He still remembers the Hurricanes of yesteryear visiting the clubrooms, and his desire to one day pull on the Hurricanes jersey himself.

“It means heaps to me; I’ve had family play in this jersey and just to be a part of that is an unreal feeling. Family probably wouldn’t talk to me if I went anywhere else.”

It’s a similar story for Asafo Aumua, who grew up in Lower Hutt’s Naenae suburb.

The now-formidable hooker has always been a star in the making, getting selected for the St Patrick’s College Silverstream first XV at the age of 15 and then going on to be part of the New Zealand Secondary Schools team and the U20s squad which won a World Championship.

Since his 2018 Hurricanes debut against the Crusaders, Aumua has solidified himself as one of the most threatening forwards in Super Rugby.

Aumua says it’s an honour to represent the team he grew up supporting.

“I grew up watching the likes of Jerry Collins, Ma’a Nonu and Tana Umaga and I wanted to be like them. Now I get to play for the Hurricanes, it’s a childhood dream come true.”

PHOTOS from the weekend and from the season to date HERE