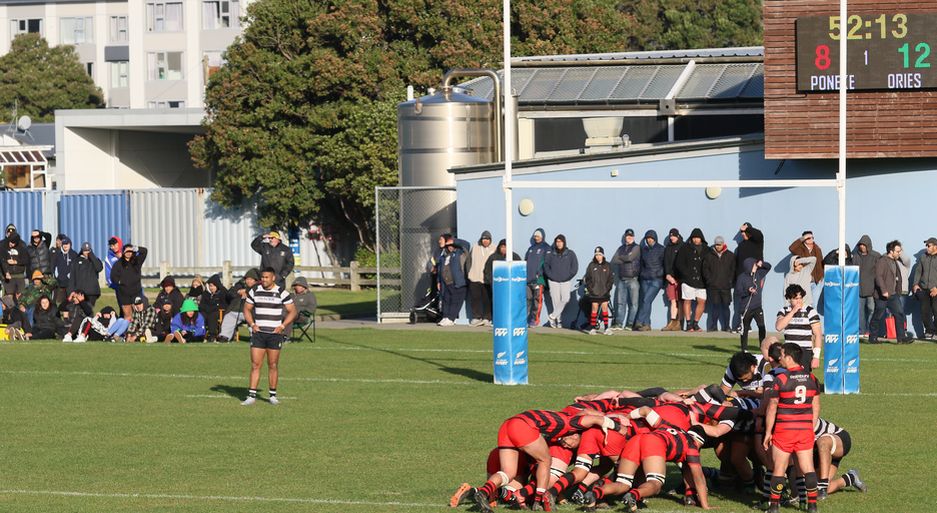 The Hutt Old Boys Marist Eagles and Poneke Streetkids both won hard fought victories today in the eighth round of the Swindale Shield competition, played in fine but cold and blustery conditions around the Wellington region.

The other five Swindale Shield matches were largely one-way traffic for the winning teams, with Northern United’s 43-23 win over the Upper Hutt Rams at Maidstone Park the closest of them.

With five rounds to play before the Jubilee Cup semi-finals, Petone are the new outright leaders on 34 points, with OBU on 33 and a group of of four teams on between 25 and 30 points and well in the top four hunt.

It might have been all over for the home side on another day when Ories centre Paulo Aukuso cut straight through off the shoulder of first-five Alex Ropeti from an attacking scrum 40 metres out and Ropeti converted to put Ories up 12-3 after 45 minutes.

Playing into the stiff wind, Poneke struck right back with a try in the far corner, to close the deficit to 12-8 and ignite the spark for a inspiring last fourth quarter.

Poneke took the lead for the first time by scoring their second try after fullback Issac Moe Jenkins reeled in a Ropeti cross kick near the sideline and counterattacked up past halfway. Tighthead prop Hennie Tui carried play up field, leading to industrious hooker Andrew Jones making a charging run at the line to score. Flyhalf Caleb Robson converted from out wide and Poneke were now up 15-12.

Ories first five Ropeti kicked a penalty to level the scores up at 15-15 with under 10 minutes to play and a blockbuster finish was guaranteed.

The winning try came three minutes from the end when Poneke won a turnover at the back of a scrum near halfway and attacked up into the 22 towards the line. Left wing Suitulaga Taulogo was caught just short of the corner flag, but Poneke recyled quickly and lock Galu Taufale dived through to score.

Earlier, all Poneke could show for having the wind advantage in the first half was a solitary Robson 25th minute penalty. Ories scored a well constructed team try to Ropeti in the 31st minute and that was the extent of the scoring in a scrappy, stop-start first half. Auckland NPC squad-bound wing Julian Savea played a full game at second five-eighth but his chances were few.

HOBM knocked MSP off the top of the table with a gritty 24-22 victory at windswept Hutt Rec. Playing against the breeze in the first-half, Hutt managed to lead 14-10 at halftime.

MSP camped inside the Eagles 22 for the opening 15 minutes but were error-ridden on attack as they only had a James Procter penalty for their industry.

The first try of the match was snatched by Eagles centre Chase Tiatia snatching an Aidan Morgan pass at halfway and dashing clear.

HOBM’s next try was a clinical finish from a scrum move when Brandyn Laursen slipped through untouched following a decoy and fast hands from Salesi Rayasi.

MSP No.8 Pago Haini made three inspired charges and willed himself over the line with the last of those bursts as the visitors closed the deficit to four at the break.

MSP was forced to hold the ball in the second half and played with honourable ambition, but every mistake was like pushing a rock back up a hill. Laursen kicked a penalty to make it 17-10 and then Morgan grabbed an intercept of his own and scored out wide to make it 17-15.

Tiatia wasn’t entirely polished at centre, but a slashing break from ten-metre mark to the 22 set up wing Tomasi Alosio for his fifth try in three weeks. The conversion made it 24-15.

A try saving tackle by MSP centre Ofa Siale, rising to his feet with the medic still attending to him on the field, and Josh Brown tackling for the best part of three minutes shirtless were genuinely hilarious and memorable moments.

The last try was scored by MSP flanker James Tuiatua in the 80th minute after resolute attack. Brown, Ben Power, Jordan Gillies and Rei Manaia led a spirited Eagles pack and young Waylon Tuhoro-Robinson is growing in statures at halfback. Charlie Gubb and Tom Horan were strong for MSP.

At Hataitai Park, Petone beat the Wellington Axemen 54-15 after leading 21-0 at halftime with the wind in their favour and pushing clear into it in the second spell.

At Fraser Park, the OBU Goats beat the Avalon Wolves 78-12 after leading 31-0 at halftime playing in a cold crosswind.

At Lyndhurst Park, home side Tawa retained the Carman Cup with an eight tries to one win over the Johnsonville Hawks.

Premier Reserve
The margins were either close or not at all in the Premier Reserve Harper Lock Shield. Leaders Northern United were in the latter camp, maintaining their 100 percent record by running out 65-3 winners over Stokes Valley in the late game at Delaney Park. Chasers MSP were in the other camp, coming back from 10-0 against HOBM to win 19-10, with Poneke staying third after beating Ories 23-7, after scoring the only try of the first half and leading 13-0 turning to play into the stiff wind and pulling further ahead with the opening try of the second half.

The other close result was at William Jones, where Pare-Plim edged Wainuiomata 18-14, while there where big margins for OBU over Avalon by 82-12, Tawa thumped Johnsonville 92-12, and Petone Blue ran out 90-12 winners over their Brotherhood counterparts though the loudest cheer of the day was reserved for the Brotherhood’s Ratu Uluiviti when he picked off an intercept and ran 80m untouched.

Premier Women’s
It’s all set for a showdown encounter between Oriental-Rongotai and Norths for the season title when they meet next week at the Polo Ground after both maintained their perfect records.

Ories were untroubled against at Petone side already littered with injuries and who suffered more during the game, running in 15 tries in a 93-0 win. Norths had to work harder, pushed by a gallant MSP side before prevailing 41-27, while HOBM finished their year winning 41-17 over Poneke and sit third on the ladder for now. The closest match of the day was out at Ngati Toa Domain, where OBU got up by 31-22 over home side Pare-Plimmerton.

Colts
The seventh round of the Paris Memorial Trophy Colts competition saw leaders Old Boys University Green maintain their position with an obligatory 22-0 win over the OBU second side.

OBU Green head a close-knit group of chasers snapping at their heels, with Petone Blue in second by beating the Wellington Axemen by default this weekend. Norths White also had the weekend off with their bye but maintain third place on the standings, ahead of Norths Blue who defeated the Upper Hutt Rams Colts 79-7. In other matches, HOBM Green beat Poneke 67-7 and Tawa blanked the Johnsonville Hawks 27-0.

U85kg
The Upper Hutt Rams maintained their perfect winning record, winning their sixth straight bonus point win by beating Eastbourne 38-24 on the latter’s Old Timers’ Day at H.W. Shortt Park. The Light Rams now have a seven-point buffer to second placed Eastbourne on the standings after seven completed rounds. Last year’s champions Avalon are third equal with the OBU Scallywags after Avalon beat the Wests Roosters 45-0 at Ian Galloway Park and OBU had the bye. In other U85kg JC Bowl matches today, both on Kilbirnie Park, Wellington beat MSP 22-10 and the HOBM Howlers pipped Poneke 26-24.

College
Four matches completed the third round in the Tranzit Premiership following Town’s 39-19 win on Wednesday over Wellington College. Scots sent a message with an emphatic 55-12 over Rongotai, while Silverstream pulled away late to also make it three wins from three with a 39-7 win over St Bernards. Wairarapa made home advantage count with a 31-19 win over Aotea, while it was a real slugfest in Elsdon with Tawa prevailing 12-3 over Mana.

In Premier 2 Upper Hutt are the leaders after beating Wainuiomata 34-10, with the Silverstream 2nds the only other unbeaten after edging Hutt International 17-12. Porirua got their first win by shutting out Paraparaumu 17-0, and Kapiti beat the Wellington College 2nds 31-17 up the coast.