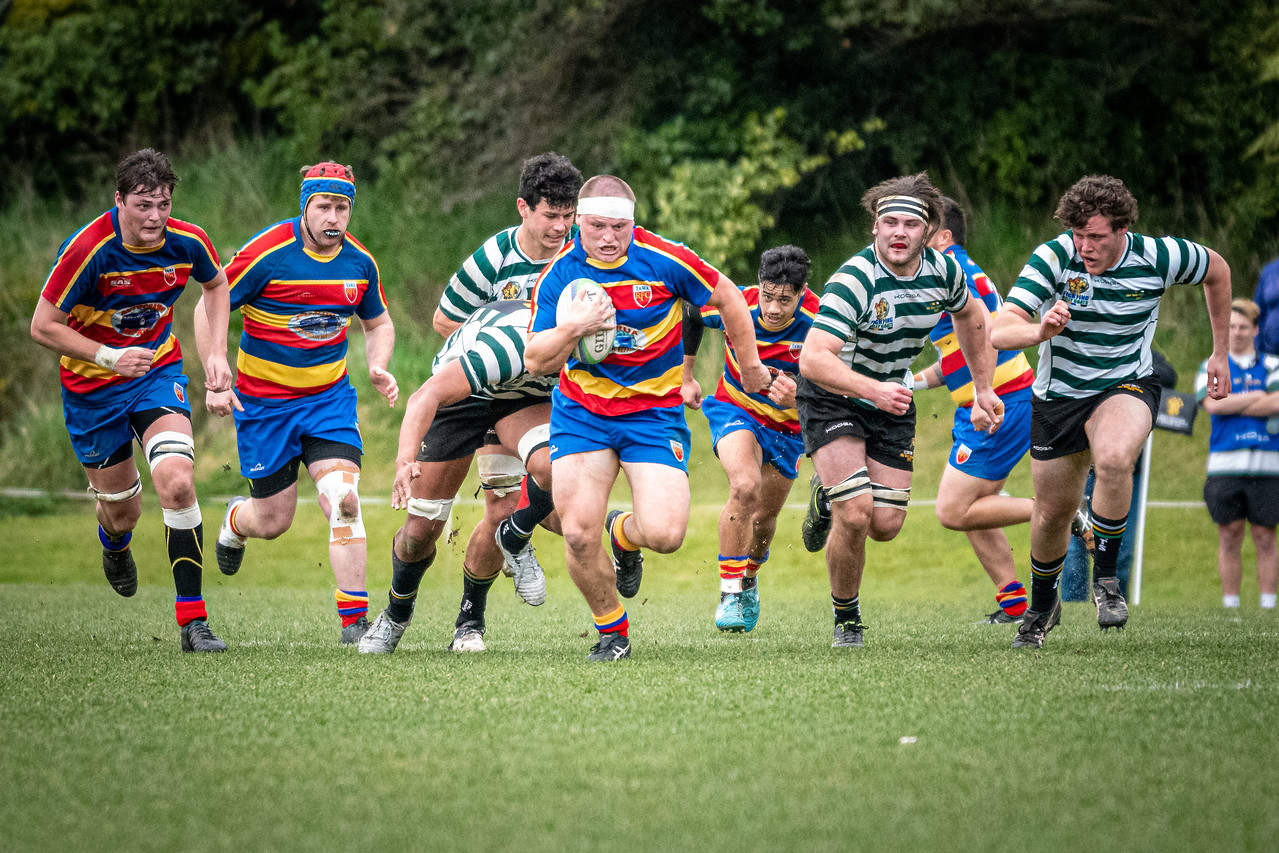 Updated: With the halfway point passed, the race is now on for the Swindale Shield and those all-important top four places to contest the Jubilee Cup at season’s end, while the action continues across all grades of senior club and college rugby.

It’s a milestone day for two players who each reach centurion status for their clubs. At Kilbirnie Park Cole Stewart will make his 100th start for Poneke, and having split those between 43 starts as a back before shifting into the forwards and making the balance in the forwards, and brings about his ton against the same club he debuted against. Over at the Hutt Rec HOBM’s Rei Manaia will make his 100th appearance for the Eagles with each of those having come in the uncompromising environment of the front row. There’s also a third player marking a century who has ties to both, with by our records Pakai Turia will play his 100th Premier game, with the first 93 of those (84 starts) coming for Poneke. Club Rugby congratulates all three on their achievement.

By quirk of the draw and results so far, most of the leading contenders hit the road this weekend as the top of the table remains tight.

One of two teams on top on 29 points, Marist St Pat’s make the journey into the Hutt Valley for the fourth time this year, with this one to the Hutt Rec to take on Hutt Old Boys Marist. MSP made short work of matters last Friday night in dismantling a poor Avalon team and will be under no illusions that things will be tougher tomorrow. HOBM arrested their three-game slide with their win over Pare-Plim but know that any further slips might mean irreparable damage to their top four hopes.

The Eagles have unsurprisingly named their strongest available side, with Manaia joined in the front row by Ben Power and Auckland and former Sunwolves prop Jarred Adams who has joined the Hurricanes as injury cover. It’s a star-studded backline with centurions Glen Walters and Brandyn Laursen in the five-eighth roles, Salesi Rayasi and Tomasi Alosio on the wings, Chase Tiatia at centre, and Turia at fullback. MSP have likewise named a strong side with the return of several players who were otherwise given last Friday off including Tyrone Thompson, Charlie Gubb, Aiden Morgan, Ryan Setefano, and Andrew Wells plus Hurricanes halfback Jonathan Taumateine. One they’re without however is Billy Proctor who is on the Hurricanes bench.

Petone are the other joint-leaders, and will likely pass MSP on the motorway as they head in the opposite direction to Hataitai Park and the Wellington Axemen. Depending on the outcome of this match and results elsewhere, the Villagers could find themselves in sole possession of the lead come tomorrow night which would be a place they haven’t occupied in many years. They regain the services of skipper Jacob Gooch, with veteran Mateaki Kafatolu making his first start in place of an injured Tupou Sopoaga. Logan Henry is given a run at fullback, so Cam Ferreira and Piri Paraone form the halves combination with former Axeman Carne Green reverting to the bench.  Wellington will be looking to build on their second win over the year last weekend and push themselves further up the table, and hand debuts to fullback Ben Stowe and winger Beau Murphy, with TeAranga Hakiwai at first-five pushing Matt Goosen to centre.

A point behind in third, Old Boys-University also head to the Hutt, though to Fraser Park to take on an Avalon Wolves side that will be hurting after last Friday’s debacle. Despite Avalon’s lowly position on the ladder and that they’ll be red hot favourites for all five points, OBU aren’t taking things lightly. Up front they’ve named what is – minus Paddy Carter – probably their first-choice forward pack spearheaded by Morgan Poi and Jonathan Fuimaono, while a backline reshuffle gives Callum Harkin an opportunity at fullback. Avalon will look to rebound and have reshuffled their deck, as in come Koli Bower, Faalolo Wright, Rubin MacCormick, Danny Yandall, and Isaia Luaai, with Jordan Aquila and Tom Kiwara swapping places as well.

After putting a dent in Poneke’s aspirations last week, the Upper Hutt Rams will look to repeat that when they host Norths at Maidstone and keep themselves on the fringes of contention; though that will be a big ask against a side that was rampant at times against Wainuiomata and hasn’t conceded a point in two weeks. The hosts have just two changes with Jack Wright back on the blindside and Cruze Pene on the wing, with it rumoured to be Murphy Taramai’s last outing for the Rams before he returns to North Harbour. Norths continue to climb the table after their slow start and will be looking for their sixth straight win. After two weeks with the same 22 they’ve decided to make plenty of changes, amongst them first starts for longtime Tawa prop Tolu Fahamokoia and flanker Ezra Seuili and starting places for Esi Komaisavai and Luke Bowden.

Tawa get to enjoy the leafy surroundings of Lyndhurst Park for another week with Johnsonville the visitors. Tawa will be looking to rebound from last week’s defeat, and after not crossing the whitewash at all the past two matches that should be the first order of business. Their side tomorrow has a number of changes, highlighted by Eamonn Carr and Robb Carr starting against their former club while Kemara Hauiti-Parapara takes a seat on the bench. For the Hawks its been so near, yet so far the past couple of weeks and while they’ll be the underdogs for tomorrow, they’ll want to give a good account of themselves as they welcome back some players that were missing last week such as outside backs Andy Ellis and Niall Delahunt.

Two sides that will want better fortunes than last week clash at William Jones Park when Wainuiomata host Paremata-Plimmerton on their Old Timers’ Day, after both suffered heavy defeats with Wainuiomata not even troubling the scoreboard. They’ll have the services of Hurricanes squad lock Liam Mitchell, along with returns for Josh Robertson-Weepu and Jordan King at full and halfback respectively. Pare-Plim restore veteran trio James Corcoran, Teariki Kie Tonga, and Stu Simonsen to their side, with Tane McMillan-Parata starting in the forwards this week for his 150th first-team match.

Last, but certainly not least is another of the highlight clashes of the season when Poneke and Oriental-Rongotai clash at Kilbirnie Park in their Jim Grbich Memorial Shield match, which commemorates the memory of the brilliant Poneke, Wellington, and NZ Maori midfielder-turned-loose forward of the 50’s and early 60’s before his untimely death in a motor vehicle accident in 1962 with the trophy first played for four years later. These matches have been close-run things in recent years and tomorrow promises to be no different especially with both sides trying to hang onto the race for the top-four places.

Poneke will be keen to mark Stewart’s milestone by reclaiming the Shield, and get timely returns from Galu Taufale and Jimmy Hewitt with the latter lining up in the midfield, and Andrew Jones replaces young Mitchell Gough at hooker after the latter suffered a horrendous ankle injury last week. The headline addition for Ories is the recently-returned Julian Savea who’ll play his first game in Magpie colours in seven years and partners Paulo Aukuso in midfield, while up front both Whetu Henry and Luke Tau’alupe return.

As well as the Grbich, five other interclub trophies are in play tomorrow, including a brand new one:

As usual, all seven matches get underway at 2.45pm.

Norths continue in their untroubled ways and will look to extend their unbeaten run when they travel to Delaney Park to face Stokes Valley in the sole 2.45pm kickoff. The teams chasing them are in matches against each other with second-placed MSP up against fourth-placed HOBM in the early game at the Hutt Rec, while its third and fifth when Poneke and Ories clash at Kilbirnie.

Elsewhere Petone A should stay near enough to the leaders when they face their Brotherhood brethren at the Rec, OBU likewise when they take on Avalon at Fraser, Tawa will look to arrest a four-game slide at home against Johnsonville, Wainuiomata will go in search of their first win when they host Pare-Plim, with these other six matches all at 1pm.

The Women reach the penultimate week of their shortened season, with the showdown clash between Oriental-Rongotai (30) and Norths (28) looming on the horizon. Before that however, there is tomorrow’s round with Ories at Petone (20) and Norths hosting Marist St Pats (17). In the remaining two matches Paremata-Plimmerton (9) are at home against Old Boys-University (13), and Hutt Old Boys Marist (18) host Poneke (-7) in what is the Lady Eagles last game of the year. Avalon (8) have this week’s bye.

All four matches are 11.30am kickoffs

Round three of the Premiership got underway on Wednesday with St Pat’s Town continuing their recent run of wins over Wellington College by 39-19. Tomorrow there are two sets of clashes at each end of the table; amongst those that have had success in both opening rounds St Bernard’s host Silverstream in Lower Hutt while at the other end of the harbour Rongotai and Scots meet after having played out a 5-all draw in appalling conditions in preseason. At the other end there’s opportunities for the other four teams to open their account with Aotea making the journey to Masterton to take on Wairarapa College, and northern duo Mana and Tawa meet in Elsdon.

In Premier 2 there’s a clash of early leaders when Hutt International and the Silverstream 2nds meet at Trentham, while the third frontrunner – Upper Hutt – head down the valley to face Wainuiomata. Kapiti are on home turf against the Wellington College 2nds as are Porirua who face Paraparaumu with both sides already needing to win. The Town 2nds have the bye in the division this week.

Monu making the most of second chances