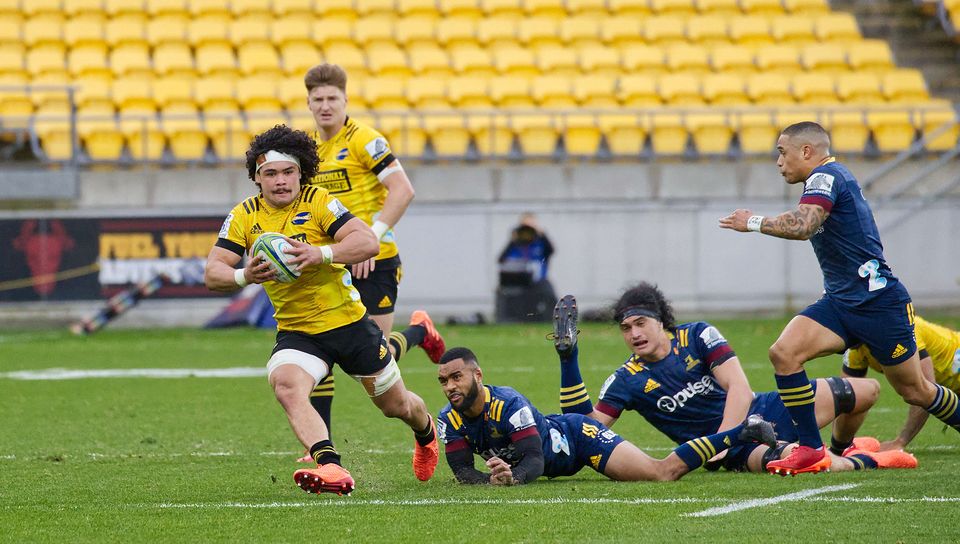 Above: Du’Plessis Kirifi running strong against the Highlanders recently. He has this week re-signed with the Hurricanes until 2023, while he is also expected to be Wellington Lions captain in the upcoming NPC. PHOTO: Mike Lewis Pictures.

I guess the mathematicians will be right and we’re effectively now playing for second in Super Rugby Aotearoa.

Not JUST second though. In a weird season and year, if 8 months ago someone had said the Hurricanes could be the second-best team in the comp, there’d be snorts of derision.

The narrative you recall was that the team would struggle without in particular Beauden Barrett and the loss of John Plumtree. But it hasn’t has it? You could even argue it is playing better this year than in 2019.

Certainly, the manner of the win two weeks ago in Christchurch suggested the side is in a very good place right now both player wise and mentally. The win wasn’t built on one or two superstars in the final 20 but on keeping
in the game. Most teams get run down by the Crusaders finishing fast, but not this time.

Jordie Barrett pretty much encapsulates the trend. He’s gone from struggling to assert himself and play with confidence to an indispensable matchwinner who’s flourishing by not being treated as a Jack of All Positions. Then there’s the heartening re-signing longer team of players such as Asafo Aumua, Peter Umaga-Jensen.Lomax, Du’Plessis Kirifi and Billy Proctor confirmed for the next three seasons.

All squads will always see comings and goings, but it suggests the Hurricanes have and are enhancing their core. It’s a constant regeneration trick which of course the Crusaders have nailed for years now.

Even the Bus might grace the squad in 2021 – if he can fire up properly for the Lions (or for whomever he will play for in the upcoming NPC). It will certainly generate a few headlines which ever route the Bus takes.

So, enjoy these two remaining games, and especially the final home one on Saturday. 15 thousand at least will be there, which considering the Chiefs are the great underperformers, is a pretty good turnout.

And looking a day ahead to the Highlanders versus Crusaders remember the mathematicians were hopelessly wrong in 2016. Wouldn’t that set up a tasty last round.

Still holding the breath on whether The Rugby Championship will proceed later this year. Yes, the COVID-19 mini tournament has the blessing of World Rugby, but will the other sides be able to make it and can it all work
with border restrictions.

For example, quarantining will need to start before anyone touches down here. I’d imagine if any players test positive while the tournament is underway, that will be the end.

It’s going to be a very tricky event to achieve. And of course, most of the competitors will be hopelessly underdone.

Having not long come out of quarantine, I can tell you that the biggest problem is cabin fever. It’s going to have to be a very special sort of hotel to stop multiple squads of players going nuts and piling on the weight.

I’d suggest security staff will also have to lift their overall fitness levels. I mean, some of these wingers are fast.