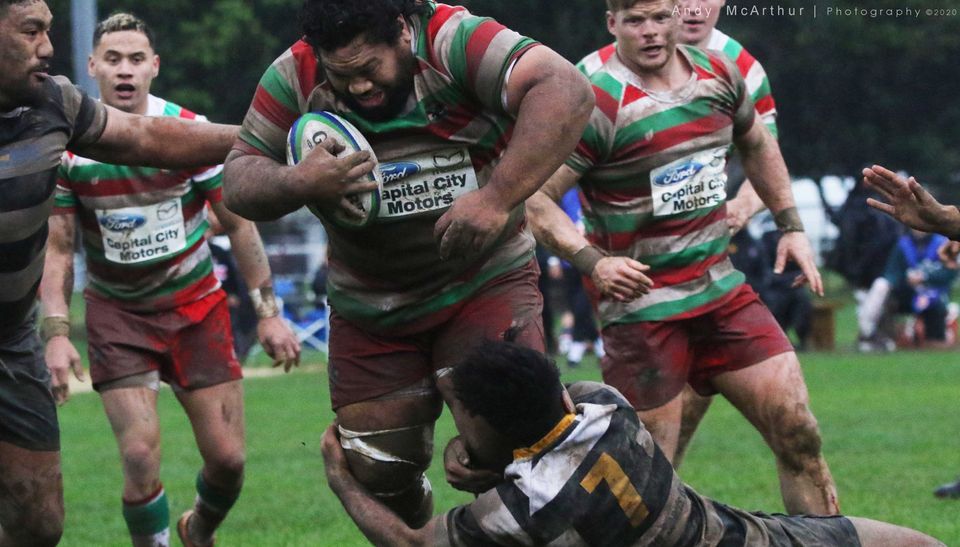 Rei Manaia playing against Ories in the opening round of this year. PHOTO: Andy McArthur.

Hutt Old Boys Marist have been a model of consistency for the past decade. The 2014 Jubilee Cup champions were runners up in 2017 and have featured in the semi-finals an additional three times since 2011.

It is no coincidence hulking prop Rei Manaia has been a presence throughout. A rock in the scrums and wrecking ball on the carry, the 28-year-old will celebrate his 100th match this weekend in the Father Cleary Shield fixture against top of the table Marist St Pat’s at home at the Hutt Rec.

Eight points behind MSP, and just three points outside the top four, an Eagles victory is of vital importance at the halfway mark of the Swindale Shield.

“Every Saturday is a highlight. Getting to represent the club and my family is special. I wouldn’t say no to 200, but it all depends on the body,” Manaia enthused.

Despite removing the meniscus entirely from his left knee, the tighthead has become one of the biggest, toughest and most respected front-rowers in the capital.

Educated by the Eagles stalwarts like Otto Rasch and Simon Malaeulu, he is a solid presence in the scum capable of covering both sides, and he is never short of a gallop.

“Props becoming more mobile has suited my game. I prefer running with the ball. I had to learn scrums when I first started playing club,” Manaia revealed.

“I was lucky to join the club at a time when there were a lot of old heads around. Rubbing shoulders with the likes of the Risdon brothers and Steven Bradshaw taught me a lot.”

In 2014 the Eagles defeated Wainuiomata 14-11 in the Jubilee Cup final. The moment is an obvious standout but so too is the shared experience of playing with his brothers, Lake (31), Brett (24), and Puna (21). Rei, Brett, and Puna all appeared in a senior game against Avalon while Lake was a frequent selection from 2012-13 with Brett commonplace since 2016.

“We all pretty much the same build. We used to play two on two in the backyard. It was pretty brutal,” Manaia laughed.

Scorer of 10 premier tries, Rei attended St Bernard’s College from 2003 to 2009. He was in the First XV coached by former Eagles mentor Matt Lee and played alongside Kiwis international Ben Matulino.

A builder by trade, with a keen interest in golf, Rei oversees bringing the speakers in for music before and after games. HOBM has led in every match this season but only has a 4-3 record. He warns the Eagles are not far away from the perfect beat.

“Were letting teams back in ourselves. Mental lapses on our own part have been costly. Were not far away from putting together 80 minutes.”

A 24-3 lead was squandered against Norths while the McBain Shield was surrendered to Petone despite a halftime advantage.

Brandyn Laursen celebrated his 100th match in the seventh round against Paremata-Plimmerton by scoring two tries and 20 points. Rei and Brandyn came through the Colts together with a third centurion to also be acknowledged for his unique contribution. Water boy and number one supporter Matthew Burroughs (right) cracks his ton.

“Matthew is the life of the club. He loves rugby and the Rabbitohs league,” Manaia acclaimed.

Additionally, it is unconfirmed, but Pakai Turia could be playing his 100th Premier match this weekend in a career playing for two clubs. He made 84 starts and nine off the bench for Poneke according to our website’s records, and six so far for the Eagles this year.

From the vault: 10th round matches in photos