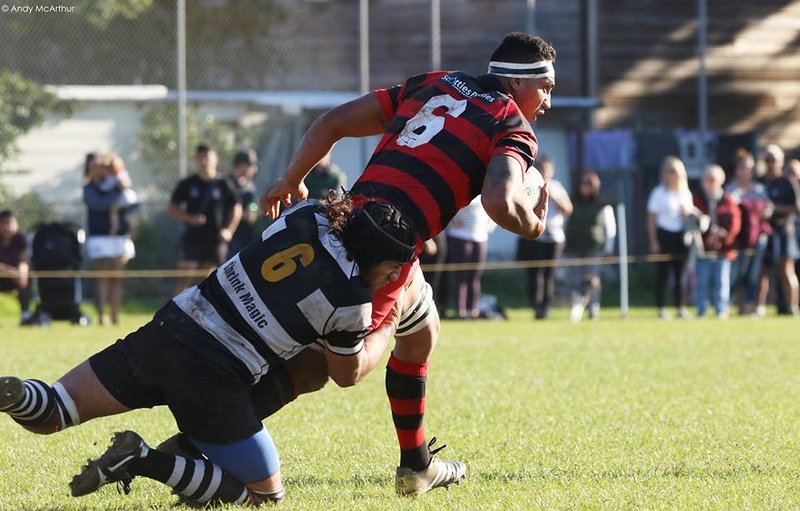 Ories’ Tuakana Metuarau and Poneke’s Galu Taufale in action in their 2017 first round clash, which was drawn 30-30.

This Saturday’s eighth round Swindale Shield match for the Jimmy Grbich Memorial Shield between Poneke and Oriental-Rongotai is one of several leading interclub trophy matches on the Wellington club ruby calendar.

And one that has lived up to its billing in recent years, with current holders ahead 124-120 across their last five Grbich Shield meetings (see past scores below).

The Shield itself is a fine specimen.

Grbich, a regular Wellington and New Zealand Maori representative played for Poneke throughout the 1950s and early 1960s before tragically dying in a late night car accident near the Tawa motorway interchange. He was 31.

Grbich, of Dalmatian and Maori descent, came to Wellington from Pukekohe in 1950 and joined the Poneke club for whom he played every season for up until his premature death. Poneke won the Jubilee Cup in his second year at the club in 1951.

In the golden age of club rugby, crowds of several thousand plus would regularly attend Athletic Park on Saturdays for Jubilee Cup rugby and the calibre and personality of players such as Jim Grbirch was a key reason why.

He started his rugby life as a wing and outside back and moved into the forwards to become a multi-skilled flanker and loose forward, not unlike some of the dynamic players of the modern era such as Victor Vito, Rodney So’oialo,  Ories’ Ardie Savea – and Poneke’s Cole Stewart who is set to play his 100th Premier starting match on Saturday.

Stewart said it’s special playing against Ories. “Both teams always get up for this occasion and the last few years results have been pretty close,”said Stewart.

“Both clubs are pretty similar as we get boys from Rongotai, Scots, St Pat’s and Wellington College, so there’s always someone you know from the other team that you went to school with or know very well which makes a good rivalry.
The local derbies are very important to club rugby as it brings a good vibe from the sidelines and it’s enjoyable for everyone players and supporters.

“Another reason this week will be the points table. Both of us are sitting at the same spot so it’s a must win game.”

Long-serving Ories tighthead prop Whetu Henry, currently a teacher at Rongotai College, has played in several of these games.

“It’s always a big game and the community looks forward to this weekend,” Henry said. “We’re focusing on our own game and looking forward to putting our best effort on the field this Saturday so we can hopefully retain the Shield,” he added.

Grbich represented Wellington for six consecutive seasons from 1957 to his death. He was a regular New Zealand Maori representative, touring Australia in 1959, playing against the British Lions in Auckland in 1959 and touring Tonga and Western Samoa in 1960, playing against Samoa in the first ‘Test’ on that tour. He played in an All Black trial in 1959, scoring a try.

Grbich’s death rocked the Wellington rugby community, not least the Poneke club and eastern suburbs community for whom he had been an integral part of for over a decade.? Wellington selector and coach Clarrie Gibbons paid tribute to him at the time: “It was my privilege to be associated with Wellington representative teams of which Jim was a member for a number of years and I would say that every rugby player who played either with him or against him would agree when I state that not a fairer player pulled on a rugby boot,” said Gibbons.

“Jim played truly for the love of the game and that stood out for him whether it was a house match or a Test match,” added Gibbons. “He was indeed a grand player because he could play either back or forward and play equally well in any position.”

N. Gardiner, a long-time member of the Oriental club, also a good friend of the Grbich family, presented the Jim Grbich Memorial Shield in 1964 and it has been contested every year since between Poneke and Oriental (1964-67) and Oriental-Rongotai ( since 1968) in their first round ‘Battle of the Cutting’ clash.

In 2018, Poneke won the Jimmy Grbich Memorial Shield off Oriental-Rongotai, their first Grbich Shield win since 2010 when they prevailed 20-18, ending a run of seven consecutive Ories wins. Ories won it back last year and are the current holders.

Their last five Swindale Shield meetings have been knife-edge affairs: