Skip to content
You are here
Home > News in briefs > This week in club rugby history: 3-9 August 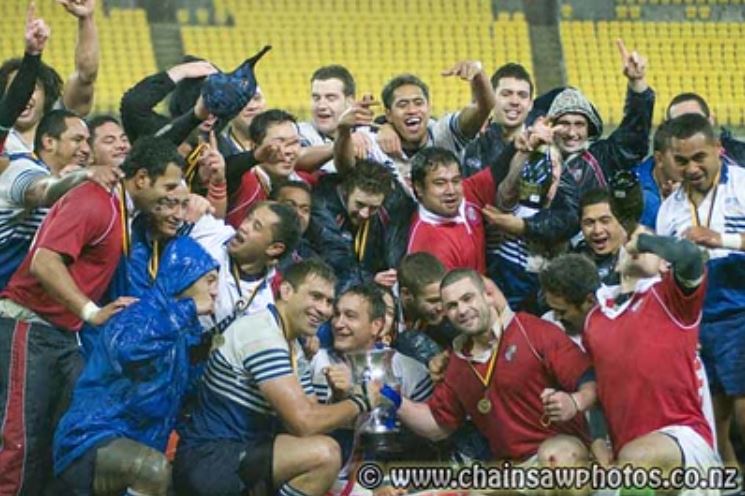 Some selected highlights in Wellington club rugby history from the past.

1964: Marist and University go into this title defining clash as joint front-runners on the table and 10 points clear of the field. In front of a 12,000-strong crowd, University triumph 16-6 after leading 16-3 at halftime. With one round to play, the Jubilee Cup is surely there’s outright. No. The following week the WRFU pulls five of their players out to play for Wellington against Taranaki and they lose to WCOB. Marist wins and the 1964 Jubilee Cup is shared between University and Marist.

1997: Two years after winning the Jubilee Cup as a player, Iain Potter guides MSP to the title as a coach. In the final against Petone, MSP turn to play into a strong southerly in the second half lead

ing just 8-0. But they extend this to 13-0 with a try to wing Dominic Feauanati. Karl Te Nana scores an intercept try for Petone, but MSP hold on to win 13-7.

2014: Hutt Old Boys Marist are victorious in the 2014 Jubilee Cup, taking down Wainuiomata 14-11 at a packed Hutt Recreation Ground in the final. Led by their inspirational skipper, Jason Risdon, the Eagles come from behind to win in a nail-biting encounter.It really could have gone either way, and both teams were worthy finalists, but a solitary penalty kick is all that separated the teams. Poneke beats Norths 19-9 to win the Hardham Cup.

1991: Hutt Old Boys beat Poneke 18-15 to win the Jubilee Cup final. In a close match, Poneke has their chances but fail to capitalise. Instead, HOB are deserved champions with another solid performance and second five-eighth Sean Rigby scores the only try of the match from a charge-down.

1996: Poneke edge Western Suburbs 9-8 in the final to win their first Jubilee Cup since 1975. The final is won up front and on defence, led by retiring Poneke flanker Shane McClure. In Poneke fashion, they grind first time finalists the Roosters down. Poneke first five-eighth James Ogden lands two dropped goals and a penalty, and finishes with 226 points for the season, while for Wests, Shane Tiatia scores the only try of the final.

2013: Tawa out-passion Oriental-Rongotai to win their maiden Jubilee Cup final, holding off the 2011 champions 26-21 to lock the Swindale Shield – Jubilee Cup away in their cabinet. Steven and James So’oialo are key players in the win, Steven scoring a sweeping 36th minute try giving Tawa a 14-13 lead at the turn and James kicking back-to-back penalties in the 73rd and 76th minutes to take the final away from Ories.

2018: For the third time in four years, Old Boys University are the Jubilee Cup champions, defeating a fast-finishing Northern United 37-31 at the Petone Rec. OBU produce a near faultless first half to lead 25-3 at halftime, dominating possession and scoring two tries through No. 8 Teariki Ben Nicholas and centre Wes Goosen. Petone beat Wainuiomata 27-26 in the Hardham Cup final.

1939: On the cusp of WW2, that was to take the lives of 85 Wellington Axemen and many more from other clubs, Wellington captures its maiden Jubilee Cup title and first club championship since 1901. Wellington beats Petone 18-17 to finish on top. In a grandstand finish, Petone’s ace goal kicker Bunk Pollock misses a penalty at the end.

1967: Petone capture what will be the first of five consecutive Jubilee Cups, beating University 12-6 in the finale. Individually, Petone’s fullback Jack Seymour is the season’s leading points scorer with 129 and Marist wing Mick Dennehy has scored the most tries with 14. Wellington, the only side to beat Petone all year (22-17) finish second.

1978: Graham Williams retires from all rugby today by helping Wellington beat Onslow 20-3 and thus share the Jubilee Cup with MSP after MSP first five Tu Wylie scores a winning try on fulltime to give them a 15-12 win over Athletic. It’s MSP’s first Cup success and comes 14 years after Marist Brothers Old Boys had last won it.

2016: Tawa have held on in a nail-biting Jubilee Cup final to edge Marist St Pat’s 24-20 at Porirua Park. However, Tawa’s defence holds strong to the end. The win is only the second Jubilee Cup victory in the club’s history, with the first coming in 2013, though this championship will be all the sweeter due to Tawa’s early-season struggles. Losing their opening three Jubilee Cup games in 2016, stuck at the bottom of the competition’s ladder, an Etuale Togia-led Tawa team overcomes the odds to end 2016 as Jubilee Cup champions. Tawa’s left-wing Togia is awarded the Jim Brown medal for Man of the Match, scoring a brace of tries.

1989: Petone defeats Upper Hutt 19-13 to win the Jubilee Cup grand final. Trailing 3-7 just before halftime, Petone halfback Tui Bradbrook scores off an attacking scrum and Petone go to the break leading 9-7. They keep their noses in front in the second spell to reward former hooker and coach Frank Walker an eighth Jubilee Cup as a player or coach.

2005: Semi-final. Petone hooker Eugene Smith wins a tighthead scrum 40 metres out from the try line, which leads directly to the Villagers scoring a sensational try on fulltime and pipping rivals Poneke 24-23. The ‘strike of god’ sends Petone to the final at Westpac Stadium where they beat come back to beat Norths 21-19.

1965: Player-coach and former All Black lock Nev MacEwan leads Athletic to a 12-3 win over University in a ‘virtual’ Jubilee Cup final. MacEwan confesses afterwards that no victory in his career has been sweeter. Athletic’s other former All Black Russell Watt scores 9 of Athletic’s 12 points in his last ever match.

1988: MSP turns around a 6-26 loss a fortnight ago to Wellington to run away from the Axemen and win the Jubilee Cup final 44-19. With the wind, MSP race to a 24-0 halftime lead and on hold on in the second.

1994: MSP upset Petone to win the Jubilee Cup final. Loose forwards Gordon Simpson and Issac Feaunati lead the way. Petone have only lost twice in 21 games this season – to MSP in the finale of the Swindale Shield and again to them today.

2011: A superb all-round team effort and some breathtaking tries gives Oriental-Rongotai its first standalone Jubilee Cup title and first since they won back-to-back when they amalgamated with Poneke during WW2. Ories run in five tries to blitz two-time defending champions Norths. In 20 minutes of play either side of halftime, Ories come from 13-6 behind to score four tries and take the game away from Norths. With 10 minutes gone in the second half, Ories have scored their third and fourth tries and opened up a 33-13 lead.

1981: Petone beat Wellington 31-12, Mike Clamp scores a hat-trick and takes his try-scoring tally to 25 for the season. Petone will meet MSP in next Sunday’s Jubilee Cup decider.

2010: There’s drama at the end of this Poneke – Petone semi-final in the Kilbirnie Park mud. Poneke holds on by a thread to deny Petone the opportunity to take the game into extra time.  In a desperate finish, the match ends with Petone camped on Poneke’s line but unable to score the try they need. Poneke had led 13-0 early in the second half, eventually winning 13-6 and qualifying for their first Jubilee Cup Final since 2006.

1969: Petone wins the Jubilee Cup for the third consecutive year, outscoring University five tries to two and winning 19-9 in the final. Meanwhile, Ories wins the Hardham Cup and Marist No. 8 Paul Russo romps home to win the Billy Wallace Best and Fairest competition.

2009: MSP wins their 13th Jubilee Cup title on the back of seven penalties to centre Chris Slade and a more disciplined and composed performance under pressure than Norths. Slade’s seven penalties carry his side to a decisive come-from-behind victory over Norths, who score the game’s only two tries. MSP caps an excellent second part of the season, winning five consecutive Jubilee Cup matches in the weeks leading up to the final. For Norths, the loss is their second in Jubilee Cup finals to go with three wins since 2004.