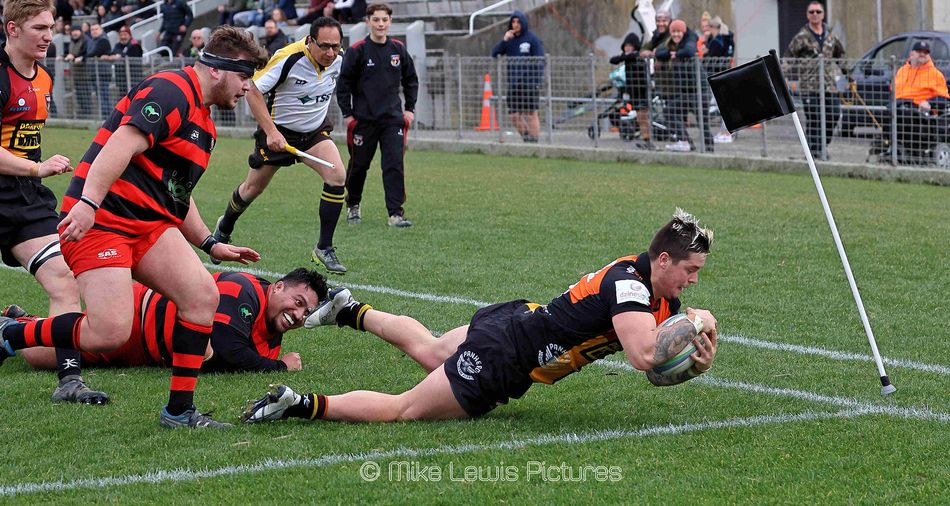 We are now into the second half of the 2020 Wellington club rugby season, and, whilst some contenders have dropped off the pace, all competitions are still wide open. Lots to play for this coming weekend.

This coming Saturday Club Rugby marks the 105th anniversary of the start of the Battle of Chunuk Bair, Gallipoli.

Some 1000 New Zealand soliders, including hundreds from the Wellington Battalion and the Wellington Mounted Rifles Battalion, lost their lives taking and and defending the Chunuk Bair ridgeline between 8-10 August 1915, before being over-ran and retreating.

Thirteen All Blacks were killed in WW1, including Henry Dewar and Albert Downing both on Chunuk Bair on 8 and 9 August 1915. Countless more rugby players were killed, injured or lost their prime playing years to the war. Many clubs were decimated of players and most Senior club competitions ceased for most of the war.

The midweek college rugby continues this Wednesday, with Wellington College hosting St Pat’s Town in their third round Wellington Premiership and traditional fixture. See below – kick-off is 1.00pm.

Petone and Marist St Pat’s top the Swindale Shield table after seven rounds. A time traveler from the 1970s, 80s and 90s would see that and see its business as usual in Wellington club rugby. When was the last time they were one-two on the table?

Some close matches in the Reserve Grade on Saturday. In top-of-the-table clashes, leaders Ories overran the Paremata-Plimmerton Punters 40-26 and second placed the Upper Hutt Rams J8s defeated the Poneke Ruffnuts 38-36. Three of the four remaining Reserve Grade games were all decided by a converted try or less.

How often does a team win by the same score in successive weeks? Earlier in the season, Ories Women won their first two games by matching 54-0 scorelines, but it happened twice on Saturday. Firstly Scots’ First XV won 58-3 for the second straight week, followed soon after by Poneke’s Premier Reserves racking up their second consecutive 40-14 win.

Taewa Rima, Ofa Ueseli and Imanueli Bese and Ben Cathro were presented with blazers for reaching 25 games for Johnsonville. Ben has been playing for social teams and Colts for a decade and got an SOS to play for the premiers this season and answered the call at the ripe age of 38! He has appeared in every match this season.

The Petone Jubilee Cup winning team of 2000 – the first team to win a title on the Stadium – formed a guard of honour for their Premiers on Saturday as they entered the Petone Rec arena.

Also noteworthy at Petone is the trophy Petone and Ories contested, the Jim Brown Memorial Trophy, being on full display on a table at the entrance to the field and in full view of the stand. Putting the interclub trophies on display before and during games is something more clubs could be doing.

Welcome back to refereeing in Wellington Garrett Williamson!

The curtain-raiser at the Petone Rec on Saturday was also exciting, with the home side prevailing 37-27 over Ories. There were 12 tries scored, but the first nine went unconverted!

Meanwhile, Club Rugby is interested to know who the sharpest shooter of them all is this year? Which team has the deadliest kicker in Wellington club or college rugby? Let us know.

Ayesha Leti-l’iga has scored 15 tries in her previous two games (eight last week and seven on Saturday). Her previous record for most tries in a game was 7 against Petone in 2018

Above: Some interesting detail in the Green Party Health Policy. It appears the third bullet point would affect rugby clubs, and not in a good way. Water only at after matches might not go down too well or generate much income for clubs during the afternoon and evening. Although the fourth bullet point could mean sports clubs can apply for a dispensation.

The Hurricanes have two more matches to conclude their Super Rugby Aotearoa campaign, hosting the Chiefs in Wellington this coming Saturday night and then playing the Highlanders in Dunedin the following Saturday.

The Hurricanes announced a contract extension last week for Du’Plessis Kirifi (right), until 2023.

The 23-year-old Northern United flanker has played 27 times for the Hurricanes in almost two seasons.

He says deciding to re-commit to the Hurricanes was an easy decision.

“I feel extremely blessed to be able to call Wellington home and run out in Hurricanes colours each year. It’s a proud city, rich in culture, extremely diverse and I feel like we as a team and organisation represent this well.”

Head coach, Jason Holland, says Kirifi has developed a lot in the last two years with the team.

“Du’Plessis has burst onto the scene in the last 2 years and put his name on the number 7 jersey at the moment. He’s extremely hard to move when he gets on the ball and has grown his abilities in attack with his handling and ball carry skills.”

The Chiefs are in danger of becoming just the third team in Super Rugby history not to have a single win in a season. Granted they had four wins in the competition prior to lockdown, but the Chiefs in 2020 are arguably the worst preformed New Zealand team in history. In the 1996 Super 12 the Crusaders were last with two wins from 11 games. In 1997 the Chiefs were 11th with four wins from 11 games and the Highlanders were last with three wins. The 2002 Bulls who went 0-11 and 2010 Lions (0-13) are the worst preformed teams in Super Rugby history.

Below,  Napier Old Boys Marist beat Tamatea 118-7 in their Hawke’s Bay Premier clash on Saturday, some dizzying highlights below. NOBM are now in a three-way race at the top of the standings with Taradale and Hastings Rugby & Sports, with a gap back to fourth placed Napier Tech. There are two rounds to play before the semi-finals.

The Ponsonby Fillies won the Coleman Shield Premier Women’s Auckland competition for the first time since 1993, defeating Manurewa 35-20 after 20 minutes of extra time in the final. Ponsonby has won the title eight times. The team was captained by Black Fern  Cristo Tofa.

A great All Black, former University team coach, President of the VUWRFC, President of the Wellington Rugby Union and current President of Centurions Rugby Club celebrated his 90th birthday, 2 August 2020. Mick was an All Black in 1952, 1956 and 1960 when vice-captain for tour of South Africa. During his playing days, he was also selected for NZ Universities (1955-57) and the provincial teams for Auckland (1952-53) Wellington (1954) Manawatu (1955) and Canterbury (1955- 59). From 1963 to 1965 and 1971 and 1972, he was coach of the Victoria University of Wellington first fifteen, winning the Jubilee Cup in 1964. His illustrious playing career and tactical acumen was recognised with his election as President of VUWRFC from 1980 to 1982 and later as President of the Wellington Rugby Union. He is a Life Member of OBU &amp; is proud to have an OBU Junior team named after him – the Under 8 Bremners.

Mick played mostly at second five eight, but also at first five. He is remembered as a fine sportsman, a most reliable five eight who played the game with enthusiasm, and who often featured as the key person for achieving a win for his team. There are three occasions in particular in the 1950s when Mick initiated play that brought an exhilarating result for his team. These three wins have been long
remembered in the history of the game in New Zealand. For Canterbury, against the British and Irish Lions team of 1959. This game has been described by the members of the Lions team as the toughest and roughest of their whole playing career. Near full time, the teams were tied and then a jinking run from Bremner to score a try and a historic win for Canterbury.

For New Zealand Universities against the Springboks, at Athletic Park in 1956, the Universities played spectacular rugby but didn’t clinch the extraordinary win until Tanner ran the length of the field to score a try. But it was an intercept from Bremner earlier in the movement that allowed Tanner to break free.

For University against Petone at the end of the season in 1954. University was attempting to win its third Jubilee Cup in succession. At full time, the score was even and the game seemed at an end when Petone were awarded a defensive scrum. However, an unsung hero. Denis McHalick the University hooker won the tight head and the ball was passed to Bremner. Bremner reversed the play and kicked the ball back over the scrum into the hands of the flying Ron Jarden on the left wing, to score the winning try. This result brought huge excitement and celebration for the University team and their supporters. The decisive play from Bremner was talked about by the old timers for many,
many years afterwards.