Skip to content
You are here
Home > News in briefs > MSP, Norths and HOBM pile on the points in seventh round 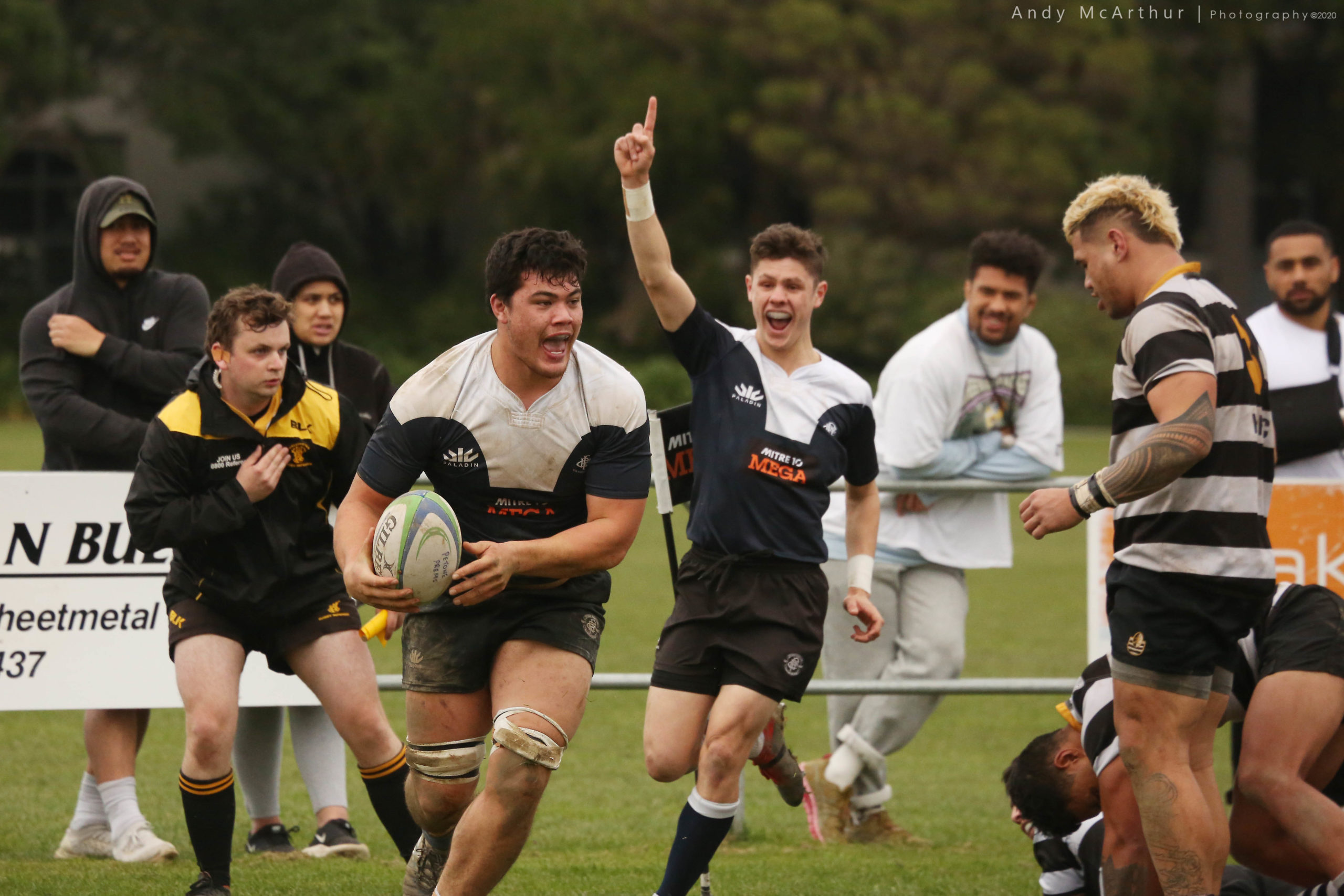 Above: Hurricanes players look on as blindside flanker Iona Apineru crosses for Petone in their Jim Brown Memorial Trophy win over Oriental-Rongotai.

Big wins for Marist St Pat’s, Northern United and Hutt Old Boys Marist offset much tighter victories for Old Boys University, Petone, Wellington and the Upper Hutt Rams in the seventh round of the Swindale Shield played in cloudy, mild conditions across the Wellington region last night and today.

MSP kicked the round off on Friday night with their 92-14 win over the Avalon Wolves at Fraser Park, while Northern United blanked Wainuiomata 66-0 and the HOBM Eagles ran through Paremata-Plimmerton 76-21 in similar large wins.

But it was much closer elsewhere, with the Wellington Axemen edging Johnsonville 13-10 and the Upper Hutt Rams pipping Poneke 15-10 in games featuring teams on the lower half of the table.

Petone continued their winning form, holding off Oriental-Rongotai 34-30 at home, while Old Boys University beat Tawa 27-9 at Lyndhurst Park but only pulled clear with two second half tries.

Under lights at Fraser Park on Friday night, Marist St Pat’s overcame Avalon by scoring seven tries in each half, with far from their strongest roster, as they consigned the Wolves to a seventh consecutive defeat.

MSP used their height and lineout power to great effect early with forwards Valentine Meachen, Tom Horan, and Pago Haini scoring three of the first four tries from the weapon.

Veteran first-five Fa’atonu Fili enjoyed almost an hour on the paddock and produced a typical array of tricky to confuse the Avalon defence. Second-five Isaia Petelo was less subtle but equally damaging as Avalon crumbled meekly. Petelo scored two long tries and gifted prop Jeremiah Tuiatua the ball when positioned under the posts. That happened in the first-half!

The back three of Willie Schultz, Farese Tasele, and Sagele Aukusitino proved elusive and all three were rewarded with tries with Aukusitino nabbing his first premier try and showing promise with his size and turn of pace.

Avalon scored two pile up tries, one in each half, when the MSP score was on 47 and 61. Prop Patrick Roil ran with heart and steam, lock Neru Lafaele has been one of the Wolves best in 2020 while halfback Nado Pepa was sprightly. Second-five Ale Peni used his size a couple of times to breakthrough.

It was Old Timers’ Day at both Johnsonville and Petone today, where the home teams came away with contrasting results.

Fullback Ivan Vaisagote burst clear and inside the 22. With the fullback to beat and an unmarked winger to his outside, the draw and pass went forward to the despair of a rabid home crowd.

A short while later Johnsonville won a penalty just outside the visitors 22 and kicked the ball dead.

Wellington opened the scoring with a Matt Goosen penalty, but Johnsonville was the more threatening with ball in hand and a break down the left-wing side saw play switched swiftly to the opposite wing where the Johnsonville forwards did the business.

Much of the second spell was a stalemate with Goosen missing two penalty shots to increase Wellington’s lead. Stephen Nelson leveled the scores with about eight minutes remaining, but when Johnsonville was isolated in their 22 Goosen reclaimed advantage for the Axemen.

While not always polished, it was a genuinely tough, spirited, and engaging affair. Openside Sam Gard’ner who played the best part of an hour in the midfield was heroic. Lock Ben Strowger-Turnock continues to grow in stature and Issac Bracewell combined effectively with Goosen especially in defensive positions.

For the Hawks captain PJ Sheck, lock Bodene Davis and No.8 Ofa Ueseli were at the heart of an earnest forward effort and Paula Kinikinilau is always tough to contain in the midfield.

At Petone, Petone were able to absorb all sorts of pressure in the first half as Ories threw plenty at them but were unable to ram home their advantage in possession and territory after they had scored two tries – including a spectacular solo try from a kick-off to left wing Steven Va’a – to take a 13-10 lead midway through the first half.

With Hurricanes prop Alex Fidow leading their charge and captain and lock Tuakana Metarau playing his 100th match for the Magpies, Ories had Petone stretched several times and if they had scored again then the game might have changed. One such two minute period of Ories ascendancy only ended with an individual turnover by Petone fullback Piri Paraone who had an assured match.

Petone clung on and scored a key try right on halftime. Held up over the line, they set down a 5-metre scrum and busy No. 8 Tupou Sopoaga fired a basketball pass to halfback Logan Henry who scored on the blindside to put Petone up 17-13 at halftime.

The second half continued at breakneck speed, before Petone scored outwide through Willie Fine following a long period in possession. Ories hit back when replacement forward Jason Seumanufagai crashed over and it was 22-20 to Petone with 20 minutes to play.

Petone’s forwards rallied and they scored the game’s next two tries to take the game away from Ories, both coming from lineout drives and hard working tight-head Kaliopasi Uluilakepa deservedly coming up with the match-clincher.

In a high-velocity match, Ories kept attacking to the end and replacement halfback Sean Hay darted over in the corner to score a try that saw Ories take 2 bonus points from their loss. Petone won the Jim Brown Memorial Trophy as well.

The Premier Reserve Harper Lock Shield was a similar high energy fixture that saw Petone prevail 37-27. Petone won the curtain-raiser seven tries to five, after leading 10-5 after 20 minutes and then 15-10 at halftime. Petone then scored twice more to extend their lead to 25-10, but Ories came hurtling back with back-t0-back tries to cut their lead to 25-20. Petone then scored the game’s next two tries and had enough of a buffer when fulltime was sounded.

At Lyndhurst Park, the opening 30 minutes was a tight and willing affair between home side Tawa and visitors Old Boys University.

The Goats then mustered the first of their three tries to lock Taine Plumtree and they went on to lead 13-9 at halftime.

Fullback Sam Reid scored a key try after halftime, converted from out wide by flyhalf Dale Sabbagh, to extend their advantage to 20-9.

OBU’s lineout drive set the winning try in motion, N. 8 Shamus Hurley-Langton coming up with the forwards try to end the scoring.

Over the divide, the Upper Hutt Rams beat Poneke 15-10 in a close match throughout. The Rams won two tries to one, with centre Daniel Schijvers and halfback Kaide McCashin finding the whitewash.

It was Gala Day at Fraser Park in the Premier Women’s competition.

There were two one-sided wins to the big guns Ories and Norths, and two closer matches in the inner fields.

Centre Ayesha Leti-L’iga scored her hat-trick in the first 10 minutes as Ories burst through early, scoring some seven tries in the opening 30 minutes. Leti-L’iga would score eight of 14 tries for her team.

Petone scored the first try against Norths, but conceded the next 14, incuding five to fullback Dhys Faleafaga.

Ories and Norths have now confirmed their match in a fortnight as being for the Women’s competition silverware in a ‘virtual’ final showdown.

It was much closer, however, on the N0. 1 grass field in front of the pavilion between home side Avalon and Hutt Old Boys Marist.

Both sides threw plenty at the other but it remained 0-0 at halftime. The second half was a similar pattern of play, before HOBM finally broke the deadlock midway through the half with their first try to go up 5-0. They created more chances that were held out, before fullback Tyler Bentley doubled the score to 10-0 with a late try out wide.

On the other side of the complex on the artificial field, OBU centre Thamsyn Newton scored all her side’s 26 points against Marist St Pat’s, but the red tide scored 51 points of their own and won 51-26 to claim the inaugural Jensen Family Cup put up for play between the two women’s sides.

By far the closest result of the afternoon was OBU’s 32-30 win over Tawa, while Petone’s top team beat Ories 37-27 (as above), and Johnsonville beat Petone’s second side 69-5. Elsewhere, Poneke beat Stokes Valley 40-14 and HOBM beat Paremata-Plimmerton 60-3.

Other Colts results saw Norths White continue their top form in beating OBU Black 55-10 in the battle of the second XVs, the Upper Hutt Rams beat Poneke 38-21 and the Tawa Colts overcome the Wellington Axemen Colts 102-7.

In the U85kg JC Bowl, there was a curious 3-0 win for defending champions Avalon over the HOBM Howlers and the Upper Hutt Light-Rams made it five straight bonus point wins with their 24-0 win over Wellington.

Rongotai College also made it two wins from two, beating Wairarapa College 26-12, while St Pat’s Town got on the board with a 38-7 win over Tawa College.