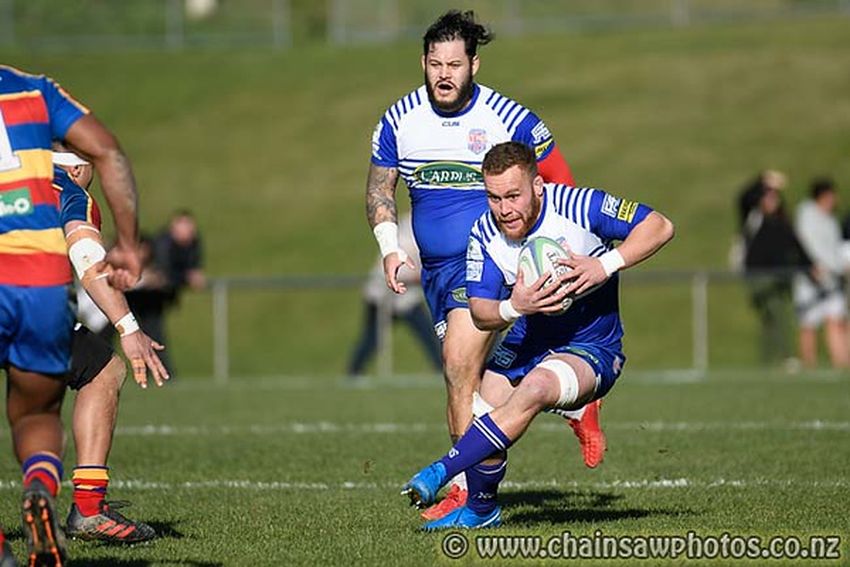 Above: Bruce Kauika-Petersen and Luca Rees join Parekura Lalaga in the loose forwards in an unchanged Norths team to play Wainuiomata tomorrow for the Alf Keating Memorial Trophy.

It’s perhaps hard to believe, but this weekend marks the halfway point of the Premier season, and the race for those precious top 4 spots will only intensify in the coming weeks. Elsewhere the Women’s competition has their annual Gala Day with all four matches at Fraser Park, there’s some key matches in the Colts, 85s, and Reserve grades, and it’s Old Timers’ Day at both Petone and Johnsonville.

It’s also a special day for two players, as Oriental-Rongotai’s Tuakana Metuarau and HOBM’s Brandyn Laursen all bring up a century of appearances for their clubs. Both have overcome some adversity to reach their milestones and are terrific ambassadors for the club game; Club Rugby congratulates them on their achievement.

After last week’s results a four-way logjam exists at the top of the Swindale Shield standings on 24 points, highlighting just how tight it is at the top end of the competition

Two of those teams, and coincidentally the two that lost last week, meet at Lyndhurst with Tawa and Old Boys-University keen to get back to winning ways after their respective narrow defeats last week to Norths and MSP, knowing that a loss tomorrow could see them drop out of those precious top four places.

The home team make a handful of changes, with returns for Luke Cummings, Maui Wallace, Eamonn Carr, and an eye-raising one for Sitiveni Paongo. Folau Vea makes his first start for the year and Trent Renata drops to fullback and Tom Maiava moves back to centre. The Goats have just a single change to their starting side with Matt Sleith replacing Paddy Carter on the flank with former Poneke back Kurt Sickler named on the bench alongside a returning Izzy Foai.

Another of those leaders is involved in the round opening match tonight, with Marist St Pat’s venturing to Fraser Park to take on Avalon under lights at 7.30pm after both teams agreed to the move. MSP have rebounded well from their first loss of the year to see off both Ories and OBU and will be warm favourites against a Wolves outfit that appears to be growing increasingly frustrated with how their season has progressed.

MSP have taken the opportunity to rest several players this weekend but are able to bring in plenty of experience. James Proctor moves into 10 with Isaia Petelo between him and younger brother Billy, Pago Haini is on the back of the scrum, and on the ageless Fa’atonu Fili is on the bench. After missing last week Avalon get veterans Daley Ena and Tom Kiwara back, and the robust Ale Peni makes his first start this year. One thing they’ll certainly need to do is try and give Chris Aumua more opportunities and space to work in.

Having won back the McBain, Petone face another challenge to their credentials when they host an Oriental-Rongotai side that returned to winning ways in emphatic style in beating Wainuiomata. It’s been an impressive start for the Villagers but having worked their way into that top four they know they’ll need to keep working to stay there. Their side tomorrow includes a starting debut for well-regarded young prop Niko Manaena and returns for lock Dylan Williamson and winger Viliami Fine, with veteran Mateaki Kafatolu in line for his first action of the season from the bench.

Ories have righted their ship, but even though they have all of the current bottom-three yet to play a loss tomorrow would leave them as much as more than two wins outside the top four. Their one change up front is the addition of Hurricanes prop Alex Fidow, while a backline reshuffle has Alex Ropeti at 10 and a quarter of youngsters in their outside backs; Steven Va’a, Ethan Webster-Nonu, Roderick Solo, and Saia Paese. And as mentioned above Metuarau plays his 100th match.

Having come out on the right side of the most bizarre scoreline seen in Wellington Premier rugby for a few years, Norths are back home at Jerry Collins Stadium for the visit of Wainuiomata and seem to have gotten the blue machine working after a sputtering start to the year. In something of a rarity they’ve named not just an unchanged starting XV, but the exact same 22 as they did for Tawa. The same can’t be said for Wainuiomata as they make a number of changes to go looking for an upset result to keep them in touch for a return to the showpiece final.

Just up the road at Ngati Toa a team coming off back-to-back wins meets one on a three-game slide, and you’d be forgiven which was Paremata-Plimmerton and which was Hutt Old Boys Marist. The home team have climbed to 11th with their wins over Wellington and Johnsonville and would dearly love to make it three on the trot for the first time ever in the Premier grade. By contrast the Eagles need to get back on track having dropped to sixth after losing the McBain following their reverses against Norths and Tawa.

Pare-Plim hand first starts to winger Simon Black and Swedish International Adam Christersson on the openside, while HOBM will be seeing double with the McMillan-Parata twins Tane and Kewa teaming up in midfield. Aside from Laursen’s 100th match, the Eagles have Chase Tiatia available to them and he starts at fullback, so Glen Watlers gets a run at 10 with Pakai Turia on the bench.

Across the Haywards there’s a mid-table scrap with the Upper Hutt Rams also back on their new Maidstone carpet for another week and Poneke venturing out into the Hutt Valley for the second consecutive weekend for a contest both need to win to stay in touch. The Rams would have taken some solace from their last gasp draw against the Axemen and have tweaked their lineup with returns for veteran trio Jamie Norman, Devon Macdonald, and Kono Feaunati.

Poneke make several changes from the side that beat Avalon, rotating in several players who came off the bench in their win over Avalon including Greg Foe, Mario Counsell and Caleb Robson. There’s no Galu Taufale, and Cole Stewart will wait a week for his 100th cap (Poneke only count starts) as he’s named on the bench.

Finally, a pair of seemingly snakebitten sides meet at Helston Park when Johnsonville host Wellington. The Hawks latest bid to end their drought came up ended in dramatic fashion with their penalty-try loss to Pare-Plim, while the Axemen coughed up a 19-0 lead to the Rams. Johnsonville will try again, though their side is without Andy Ellis or Irish duo Mark Sutton and Niall Delahunt, while Wellington give starts to long-serving pair Tevita Falekalala and Te Aranga Hakiwai, and the versatile William Cosgriff starts in yet another different position.

No fewer than five interclub trophies are in play this weekend:

All six of tomorrow’s matches are at the usual 2.45pm kickoff time

Baring a massive upset, Norths should retain their place at the top of the table when they host cellar-dwellers Wainuiomata in the early game at the JCS.  MSP should be the favourites to do likewise when they travel out to Fraser Park to play Avalon, and Ories will gave their work cut-out to stay third when the visit Petone A at the Rec.

In the remaining matches Poneke have a potentially tricky outing at Stokes Valley, HOBM will look to keep pace when they head to Ngati Toa Domain to face Pare-Plim, Tawa and OBU meet at Lyndhurst in a midtable scrap with both needing to win to keep pace, and at Helston Johnsonville – who broke their duck last Saturday – host the Petone Brotherhood who are looking to notch their first success.

All matches are at 1pm, bar the Stokes Valley vs Poneke match which is at 2.45pm

All roads for the women lead to Fraser Park, with a Gala Day for all four matches. Old Boys-University and Marist St Pats take to the artificial and with their new Jensen Family Cup being played for the first time. On the other side of the Sportsville building home team Avalon are against valley rivals Hutt Old Boys Marist on the #1 grass pitch, its second vs third on #2 with Norths facing Petone, and at the northern end on #3 leaders Oriental-Rongotai meet Paremata-Plimmerton. Poneke has this week’s bye.

As usual, all matches are 11.30am kickoffs

The week’s round of the Premiership is already underway, with Silverstream making it two wins from two with Wednesday’s 45-26 result over Wellington College. Tomorrow three schools can join them, with Scots heading out to Aotea, Rongotai venture to Masterton to visit Wairarapa College, and St Bernard’s are at home against Mana. The fourth fixture of the day is in Kilbirnie, where Town and Tawa go in search of their first wins.

In Premier 2 first-up winners the Silverstream 2nds and Wainuiomata meet in Upper Hutt, Hutt International head to the city to face the Wellington College 2nds and as do Kapiti to open their campaign against the Town 2nds. The only all-1st XV match is at Upper Hutt College, who host Porirua.

The highlight match of the Colts round is the meeting between perennial contenders HOBM and OBU Green tomorrow at the Hutt Rec, though the round starts tonight with Johnsonville hosting the only team to have won all of their matches so far in Petone under lights at Alex Moore Park. The other matches tomorrow have the two ‘B’ teams – OBU Black and current table leaders Norths White – meeting at Nairnville, the Upper Hutt Rams and Poneke get the chance to add to their wins tally at Maoribank, and Tawa will be favourites to keep the momentum from upsetting Norths Blue – who have the bye – when hosting strugglers Wellington at Redwood.

In Under 85kg the Upper Hutt Rams continue to lead the way, with Avalon’s surprise loss last weekend to MSP leaving them somewhat adrift. Both are at home with the Rams hosting Wellington and the Wolves facing winless HOBM, with Eastbourne – now up to second but still yet to have their bye – back at HW Shortt for the visit by MSP. The fourth match is in the city, with the OBU Scallywags and Wests Roosters meeting at Nairnville.

And finally there’s a big couple of matches in Reserve Grade, with unbeaten joint-leaders the Ories Vatos and Upper Hutt J8’s both in the eastern suburbs. The Vatos host the third-placed Pare-Plim Punters at Polo, while the J8’s are at Kilbirnie Park to face the fourth-placed Poneke Ruffnuts who themselves went down to the Vatos last week.