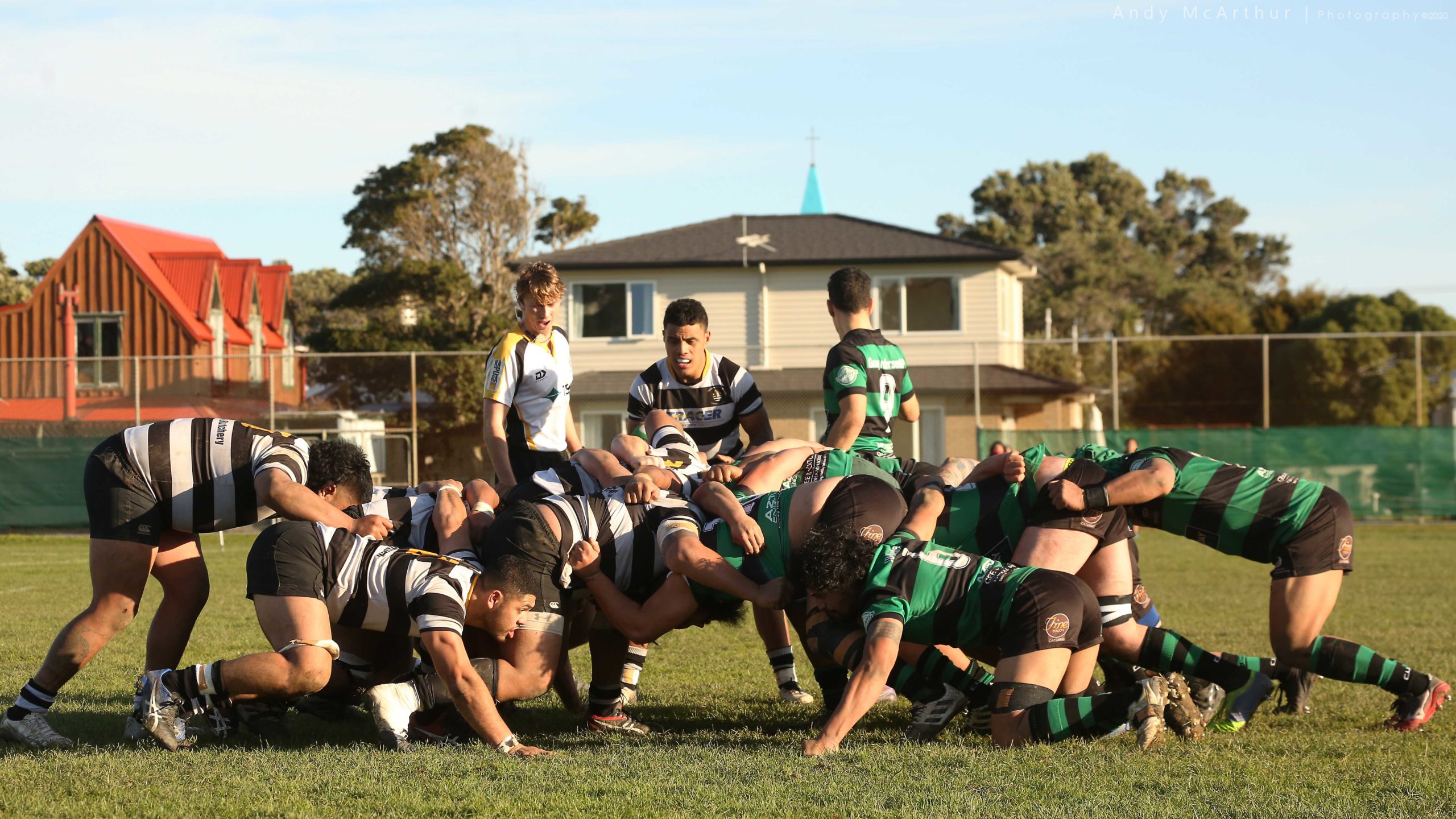 Above: The Ories and Wainuiomata scrums pack down on Saturday. Photo: Andy McArthur. View all galleries from the weekend HERE

Looking forward to rejoining my brothers down at the @Hurricanesrugby for the remainder of the season ???? blessed to get this opportunity and very grateful! Back to my where it all started https://t.co/filO3USnbj

Julian Savea, AKA the Bus, returning to the Hurricanes for the remainder of the season.

A busy slate of midweek rugby ahead. Wednesday is highlighted by that afternoon’s St Pat’s Silverstream vs Wellington College Traditional, while that night has the first of the season’s four Beard Trophy matches when holders Aotea – narrow losers to Rongotai in their Premiership opener – are challenged by Bishop Viard. In between times the Girls season proper gets underway, headed by the six teams vying for this year’s Premier 1 title (see more about this below).

Also, an early start to this weekend’s Swindale Shield round, with the Avalon Wolves and MSP taking to the Fraser Park turf on Friday night.

Fraser Park is also the venue for this weekend’s round of Women’s matches, with the match between Norths and Petone topping the billing

Congrats to the players who reached milestone numbers over the weekend. Avalon’s Chris Aumua and Poneke’s Soti Fa’amausili both played their blazer games for their respective clubs, as did Norths’ Dora Laupola and MSP’s Paige Va’auli. OBU’s Matt Fowler and Upper Hutt’s Murphy Taramai reached the 50 games threshold. All things going well, there’ll be another couple of Premier centurions this weekend coming as well.

Talented youngsters who show promise in both rugby codes is nothing new, but the ugly underbelly of vested interests is peeking through the surface in Wellington again. Club Rugby understands that one player from one of the leading 1st XV’s is currently caught in a tug-of-war between an NRL club and NZ rugby, and while they did turn out for their 1st XV on Saturday, the previous two weekends had seen them play in the local Premier league comp.

Plenty of people amazed that two teams laden with attacking talent could only manage a single try between them, but that’s what happened in Norths’ 5-0 win over Tawa on Saturday. While not the lowest scoring top division match in Wellington history – you’ll find 3-0 and even 0-0 if you go back far enough – it’s a modern record, eclipsing Norths 7-0 win over Avalon in the opening round of the 2006 season where Rob Aloe’s converted try was the difference. That game was a night game and played in poor conditions. There was also Norths’ 6-3 win over Poneke in the Jubilee Cup round-robin in 2004. That was in appalling conditions and in a mudbath at Kilbirnie Park.

On social media, Andy Leslie was named in one of the Parliamentary XV v Centurions XV squads in their match across the hill at William Jones Park on Saturday. Did anyone really expect him to miss McBain?

Huge crowds at the McBain. Pity the Mayor didn’t show, but great to see Chris Bishop and Ginny Andersen enjoying the game and supporting their local community.

Electric atmosphere at the McBain, but perhaps the biggest cheer of the day was for strikingly handsome Petone Colts centre Piri Bradshaw who snatched an intercept to seal a narrow win for the Petone Colts against an excellent HOBM outfit. The other thing noticeable about Piri is he always plays with his socks down. Israel Dagg, Michael Hooper, Johnny May, Charles Piutau and Ben Franks are handy company, but socks down is a uniform infraction for the purist’s surely?

Short Passes had a correspondent at Fraser Park on Saturday, and while the Premier match was a struggle, it was the poor quality of the primary grass field that also attracted attention. Given the money spent on the facility so far, having a field that has reasonable grass cover and not a highly noticeable depression at the western end doesn’t seem too much to ask is it?

Welcome back to club rugby Wellington Axemen back Paddy Hughes.

Hughes played on the right wing in the Axemen’s Old Timers’ Day draw against the Upper Hutt Rams. Before Saturday, his last appearance in a Premier match came in their Hardham Cup clash against Pare-Plim in 2017; a span of 1,092 days owing to a succession of injuries, surgeries and setbacks in his recovery. One of the quickest blokes going around before then, hopefully he returns to that form.

Last year the former Tawa and Northern United Premier halfback was involved in a bad car crash. They did not think he would walk again, but he is back playing rugby for the Tawa Premier Reserves and on Saturday made his return to Jerry Collins Stadium playing against his old club Norths.

If yellow doesn’t clash with red, why did the Hurricanes play in battleship grey on Saturday?

In this space a couple of weeks ago we made mention that Black Fern’s winger Ayesha Leti-l’iga failed to score in Ories’ win over HOBM. A week later that happened again when she wasn’t amongst their scorers against OBU, albeit in those matches she came off the bench. She made up for lost time when restored to the starting side this week, notching eight tries in their win over Avalon, with teammate Amanda Rasch totalling 30 points through two tries and 10 conversions herself

Always good to see players from other codes make their way on to the club rugby teamsheets. Last year White Ferns cricket captain Sophie Devine turned out on the wing for the Petone Ponies, while yesterday they had Pallas Potter making her debut off the bench. Pallas is a former student out of nearby Sacred Heart College and is a former Junior White Sox softball cpatain and White Sox player, who has also spent some time recently in the American College system in Florida.

Johnsonville led most of the game, and at one stage 14-3, but lost again. They have lost 26 games in a row now and 32 Swindale Shield games stretching back to Round 10 of 2017.  Paremata-Plimerton won the last game against the Hawks by the same score of 23-20.

Paremata-Plimmerton last won two Swindale Shield games in a row when they beat Wellington 14-8 and Poneke 25-11 in Rounds 9 and 10 of 2018. They have never won three in a row.

This coming Saturday sees the inaugural playing of the Jensen Family Cup.

Donated by the Jensen Family, Michael Jensen was a player in the first ever Marist St Pats trophy winning side the Junior 1st in 1971. He also played for Wellington Juniors in the same year. Dave Jensen was the coach of the first ever Old Boys University Women’s trophy winning team in 2016, he also went on to be a part of the Wellington Pride Coaching set up. The Jensen Family Cup is believed to be the first interclub trophy for Women’s Rugby in Wellington

The Wellington Schoolgirls competitions start this week, with three grades:

Six teams will compete in the Premier 1 grade, with a round robin (five games) followed by semi-finals and final. This is A 15-a-side grade, but Game On rules applies.

Five teams will compete in Premier 2, with a round robin (four games + bye) followed by semi-finals and final. This is a 12-a-side grade and Game On may be applied at any stage.

Seven teams will compete in the U15 Development ten-a-side grade. There will be one round robin (six games + bye), and no Final. There will be no game on 2nd September during winter tournament week to allow teams to attend the Hurricane U15 Girls tournament.

Hosted on behalf of the Hurricanes Youth Rugby Council by the Horowhenua-Kapiti Rugby Union, the Tournament will be held from Monday 31st August to Tuesday 1st September, during Winter Tournament Week. All games will be played at Playford Park in Levin.

In the Hawke’s Bay, Hastings Rugby & Sports beat Taradale 35-10 in a top-of-the-table Maddison Trophy sixth round match on Saturday. HRS lead the standings on 26 points, ahead of Taradale on 25 and Napier Old Boys Marist on 25.

Penalty tries seem to have been a flavour of the week. The award of one was a pivotal moment in Silverstream’s win over Town, while another was the match-winner for Paremata-Plimmerton against Johnsonville.

Dropped goals seem to be back in vogue in Super Rugby Aotearoa, and perhaps that’s filtered down to club level. Two were snapped on Saturday, one by Pare-Plim’s Justin Wilson and the other by MSP’s Aiden Morgan to settle matter against OBU. As far as we can tell, its the first time since 2013 two matches in the same round included a dropped goal

Nice footwork in this clip below:

Below: Paremata-Plimmerton’s winning try on Saturday against the Johnsonville Hawks: