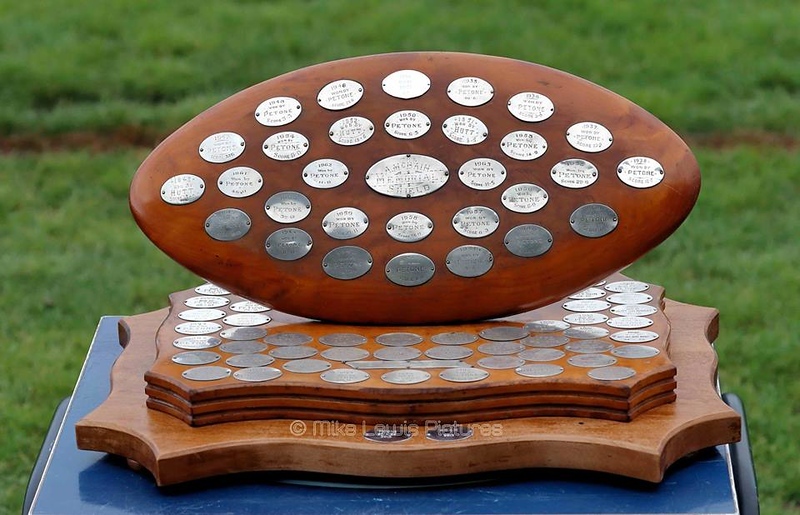 The McBain Shield between Petone and Hutt Old Boys Marist has been contested every year since 1934. Saturday’s clash at the Petone Rec will be the 85th time it has been on the line.

There have been many memorable McBain Shield matches over the years, particularly in the modern era since 2003 when HOBM regained their Premier status for the final time. Summaries of five of these games that Club Rugby has covered are below.

Hutt Old Boys Marist had finished last in 2003’s Swindale Shield and Petone were to go and win the 2004 Swindale Shield. The two sides met on in warm sunny conditions on ANZAC day in round four. Lock Polonga Pedro scored two key tries, including the match winner at the end, after Petone had come back from a big deficit following halfback Nick Risdon charging down a clearing kick to give the Eagles a 17-0 lead at halftime. Petone replied after the break with tries to wing Willie Moala and Cam Incledon But HOBM, led by stalwart forwards Doug Power and Martin Wallis, defended brilliantly and there was no way through again for the Villagers. Leading the 2004 Swindale Shield for seven of the first eight rounds, HOBM eventually finished fourth equal behind Petone.

HOBM won the McBain Shield for the fourth consecutive year with a record win at home at the Hutt Rec, wing James Kusel scoring four tries and Brandyn Laursen scoring 20 points. Commentator Adam Julian recalls the match: “I commentated the 2013 McBain Shield with Petone stalwart Murray Blandford. Hutt incredibly led 36-3 after 20 minutes. The previous week Hutt had beaten Rimutaka 127-0 and the new electronic scoreboard at the Hutt Rec had malfunctioned when Hutt passed hundred points. I turned to Murray and told him this could happen again and then quipped, ‘the scoreboard might explode today. Murray dropped his hands into his head and his Hutt mates, visible through the commentary box window, were waving white handkerchiefs and heckling in his direction. It was funny at the time, but not to Murray, I haven’t worked with him since.”

An inspired Petone defied pre-match predictions to re-claim the McBain Shield at home. With the confidence of an outstanding first half defensive effort, the Mateaki Kafatolu-led Petone side turned around a 3-14 deficit. In a tight finish, HOBM first five-eighth/fullback Glen Walters had the chance to re-take the lead but pulled his penalty attempt wide. Petone pivot Tamati Samuels, then had his 22-dropout charged down, but he regained the ball and hoofed it down deep into HOBM’s corner and the home side held on to the final whistle to win this match for the first time since 2010. After an intense forwards dominated battle throughout most of the first half, the Eagles had led 9-3 on penalties when their talisman prop Simon Malaeulu scored to extend the margin. Petone came hit back and right wing Aleks Noble-Campbell scored in the corner and Green converted to put Petone ahead 20-14. HOBM scored another try and it was back to a one-point game and a tense finish.

Petone scored 27 points in the second half to come from behind and win 27-23. In the dying moments, Petone turned down a shot at goal to tie the game at 23-23 after reserve HOBM prop Brett Manaia was sin-binned for not rolling away at the ruck. That decision paid off for Petone as the Villagers stole the game on the hooter, scoring on the left wing through Willie Fine for his hat-trick and the win as the home fans went into raptures. After the first 40 minutes, a Petone win didn’t look at all likely as they were held scoreless by the Eagles but a yellow card early in the second half to Alexis Time, who was celebrating his 150th appearance in the green, white and red, resulted in two Petone tries to bring the hosts within one point of Hutt and spark life into Petone.

The Eagles were down 23-27 and in need of a last-gasp rugby miracle. It came when fullback Anthony Utanga outflanked the Petone defence right on the hooter. HOBM appeared to be in control when leading 20-10 early in the second-half. However the Eagles forwards noticeably fatigued and Petone piled on 17 unanswered points to surge ahead 27-20. There were two key moments which changed the momentum again. Petone was reduced to 14 players for the second time when lock Glen Angus was yellow carded following an all-in melee. Hutt reduced the deficit to four when Glen Walters kicked a handy penalty. Earlier Hutt flanker Jordan Gillies stopped a certain try when he toppled Losi Filipo around the ankles when the Petone second-five was in the clear and headed for the try line. Filipo was in menacing form for Petone, playing a hand in three of the four tries scored by the hosts.

Some players to watch in club rugby this year