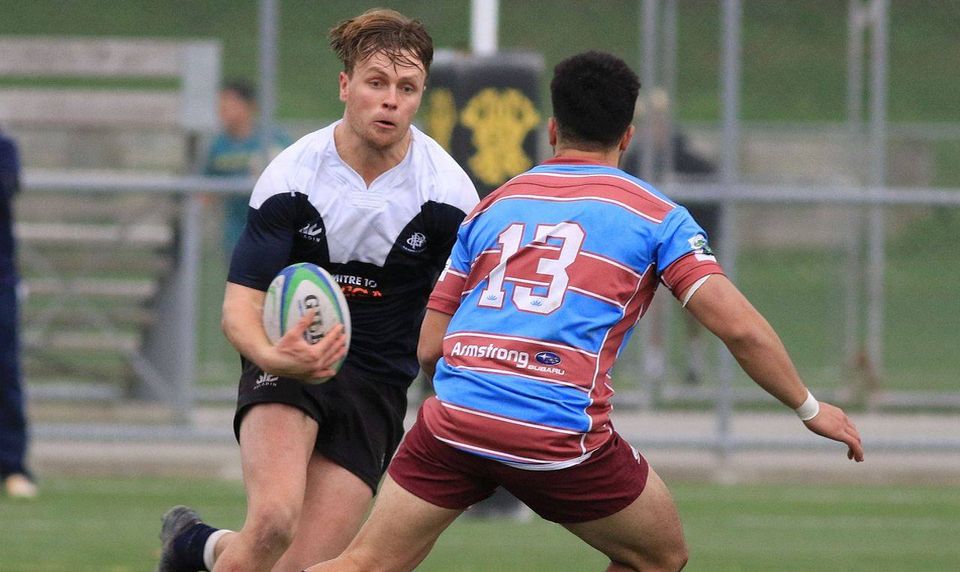 “I’m a bit of a battler who found myself in the right place at the right time,” Tom Carter responded when asked about his compelling form in the midfield for Petone.

The 26-year old has scored four tries in his first five games this season as the Villagers head into Saturday’s McBain Shield against Hutt Old Boys Marist with an encouraging 4-1 record.

In the past fortnight Petone has tamed Marist St Pat’s 20-19 and Poneke 28-20 in tight tussles, which suggests there is a greater steel about Petone in 2020.

In the recent past losing close games has become a bad habit. In the last 54 Swindale Shield games Petone has had 17 defeats by under 10 points with four draws.

“There’s a really good vibe at the club right now, a sense that something is simmering. We are tighter than what we have been, and we have picked up some good players. We are not getting too far ahead of ourselves because we have only played a few games, but the whole club, Colts, women’s and reserves are getting along,” Carter enthused.

In 2019 Carter was one of the “good new players” Petone acquired. In 2018 he had been playing for Eastbourne in the Under 85kg grade. Despite enjoying the environment at the club and losing a heart-wrenching semi-final by a point to eventual champions Upper Hutt, greater challenges beckoned.

“I got invited to Petone by a couple of mates and got in the reserves. When I saw the McBain Shield last year I had no idea how big it was but told myself I wanted to push for Prems. Even though Petone lost it was massive,” Carter reflected.

He debuted for Petone in a 41-22 win against Tawa on March 23, 2019. All five of his premier appearances last year were off the bench.

“Injuries have helped me get in the team, but there’s some great coaching here that’s really lifted my game,” Carter observed.

“When those around you are playing well it helps everyone.”

An opening batsman in cricket, he played several seasons for Petone Prems, but really made a name for himself in England. Born in Devon to an English father and Kiwi artist mother he plied his trade at the St Mary’s club in Bristol for five years. W.G. Grace is from Bristol.

“I was only supposed to go for 12 months but kept getting invited back and couldn’t leave. I scored a few centuries and had a few too many benders. I was incredibly lucky Europe was on my front doorstep,” he reflected.

Carter played rugby for Winterbourne confirming a preference for second-five.

“I’ll play prop for Petone if it gets me in the team, but I prefer second-five to centre because you’re closer to the ball and have more license to run.”

He has run in four tries this season with a brace secured against Avalon, a try which almost led to a draw against Wainuiomata and a critical first-half strike against Poneke last week. He is forming a strong defensive wall with veteran Wille Tufui, himself back from a stint in England.

Carter will likely mark Brayden Laursen one of the most experienced and accomplished backs in the competition. Both men are builders. The McBain has been contested annually since 1934 and though Petone has won 60 of the 85 clashes, the Eagles have won the last two contests and achieved six triumphs in the last decade. Despite Hutt losing their past two games to Norths (27-30) and Tawa (10-17) Carter expects a dogged fight.

“Hutt are a great side that can strike from anywhere. They will be desperate because that is how it is in McBain. I’ve heard a lot of stories about McBain and I can’t wait to be a part of it.”

Petone last won the Swindale Shield in 2009 and made the Jubilee Cup semi-finals in 2010. A win on Saturday and other results pending could have the Villagers in pole position approaching the halfway mark of the season.

The McBain Shield between Petone and Hutt Old Boys Marist kicks-off at 2:45 pm on Saturday.