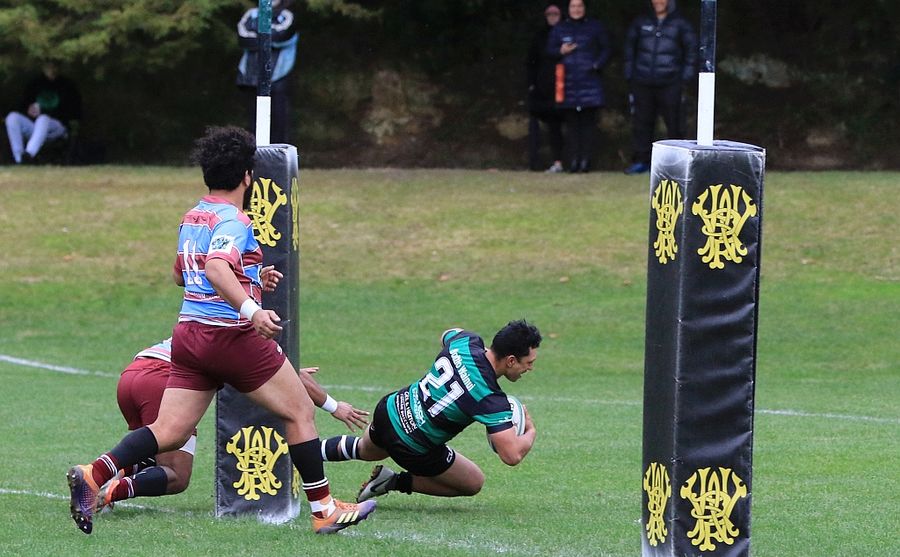 John Monu flies in to score the match sealing try for Wainuiomata against Avalon on Saturday. PHOTO: Hugh Pretorius. For galleries from the weekend visit our photos website HERE

Some mouth watering Swindale Shield match-ups in this coming weekend’s sixth round. Hire a helicopter or catch a ride with Dave Lintott to see parts of all games.

Premier matches at a glance this coming Saturday are:

This week opens with the St Pats Town v St Pat’s Silverstream Premiership Secondary school season opener on Wednesday. Kick-off at Evans Bay Park is listed as 12.30pm, but we will try and confirm that.

Town hasn’t won the traditional for a decade and lost in pre-season to Silverstream. Their last success in any match against Silverstream was the 2015 semi-final.

However, Town were good against Hastings Boys’ High School last Wednesday. They lost 19-21, but two of Hastings’ three tries were scored back-to-back in the first half and Town ended the match on rampant attack but ran out of time. They will push Silverstream, whose last outing was a 31-32 loss to New Plymouth Boys’ High School last Saturday.

With Wellington rugby’s latest worst-kept secret having made its way into the mainstream media yesterday a few questions need to be asked. What is it with some senior club players who insist on behaving badly?  Why didn’t WRFU front-foot the matter when it became clear earlier in the week a serious incident had taken place, especially since it allegedly involves a current Wellington representative? And why, having abandoned coverage of local sport a couple of years ago, do the media only get involved in grassroots sport when something negative happens?

Club Rugby wishes the victims a speedy recovery, and hopes that the full force of the law is brought against the aggressors

On a far more positive note, congratulations again to Saturday’s three centurions, though it was bittersweet one for Sean Hay and Galu Taufale as their sides met defeat, while Faa’sua Makisi celebrated in style with four tries in her sides’ win over OBU (and credit to the Impala’s for the guard of honour before kick-off).

A wonderful tribute to Taufale at the Poneke clubhouse. He celebrated his 100th game by receiving a cap from Richard Watt and then responded solo to his teams’ stirring haka.

Short Passes was impressed by the commitment of the Hutt Old Boys Marist Women on Saturday, as they achieved perhaps their most noteworthy result in tipping over Petone 27-22. The Lady Eagles never trailed in the match, and simply refused to let their more illustrious opponents – with a half-dozen current and former Wellington representatives, albeit some out of position – gain the foothold to dictate matters; with Maryann Collins in some devastating form in midfield.

Staying with the Women’s game, the season’s Farah Palmer Cup draw has been issued. Rather than the normal Premiership/Championship split, 2020 will be contested on a North/South basis with Wellington in the southern section alongside Manawatu, Hawkes Bay, Tasman, Otago, and reigning champions Canterbury. The seven-team northern section gets underway on Saturday August 22, with the southern section starting two weeks later on September 5. The schedule has the Pride playing three of their five round-robin games at home; against Otago at Porirua Park in the opening round, Hawke’s Bay at the Hutt Rec two weeks later, and Manawatu the following weekend at the Stadium.

It also confirms that the Women’s club competition will conclude on 15 August, which is when frontrunners Oriental-Rongotai and Norths are scheduled to meet in the final round of the Rebecca Liua’ana Trophy.

All four of Paremata-Plimmerton‘s competition-grade teams won on Saturday, the first time they had achieved that on a single day in three years to the week, with the caveat that their Colts team – which they aren’t running in 2020 – lost that weekend but played on the Friday night

Long-time referee David Walsh‘s return to the club Premier grades might have been one of the more memorable of the 1,300 or so matches he’s officiated. He oversaw the back-and-forth Premier Reserve clash between Poneke and Petone which finished in a 43-all draw with a conversion from the sideline to conclude matters.

In 2017 the Highlanders scored three tries in the final five minutes to secure a remarkable 45-41 comeback victory against the Cheetahs. Sunday’s effort against the Chiefs from 24-0 and 31-7 down was perhaps more unlikely.

Is Sam Cane the best #7 in Super Rugby?

The Chiefs have lost a franchise-record six games in a row.

Which club is your favourite place to visit for its after-match spread (food, not alcohol)?

Lions or the Olympics? 2021 starting to take shape.

As a coach or supporter, what is the most annoying basic mistake your team or teams do time and again?

Here’s one. Failing to find touch when kicking the ball out on a penalty. Just in the games we watch this is occurring several times a weekend. Across all grades – Colts, Premier Reserve, Women’s and Premier. Why hand the opposition back the advantage? Instead of trying to chew off extra metres for your next lineout (admittedly in the wind), just get the ball out and start again!

Taradale are setting a hot pace in Hawke’s Bay Premier club rugby. They have five straight Maddison Trophy bonus point wins and have scored 230 points and conceded 81 along the way. They beat mid-table Napier Tech 32-16 on Saturday.

Watch this week’s highlights in the match between Napier Old Boys Marist and Napier Pirates.

Hamish Northcott played his 100th match for Varsity in a 21-21 draw with Feilding Yellows in Saturday’s Manawatu club rugby competition.

After five rounds, Feilding Yellows lead the standings on 22 points and Varsity are second on 21.

Hamish Northcott into the 100 club ? A great effort from a great Varsity man, congrats Mush ? #SKYBLUE

Below: Bump off of the Week – Maryann Collins v Petone.

Defending champions Blues were forced to default their round six Southland premier club competition game against Woodlands on Saturday as a long list of injuries finally took its toll.

It’s a blow for Southland’s most successful club, in terms of the most Galbraith Shield titles.

Blues have been struck down through the first half of the season with plenty of injuries to its tight-five, in particular in the front row.