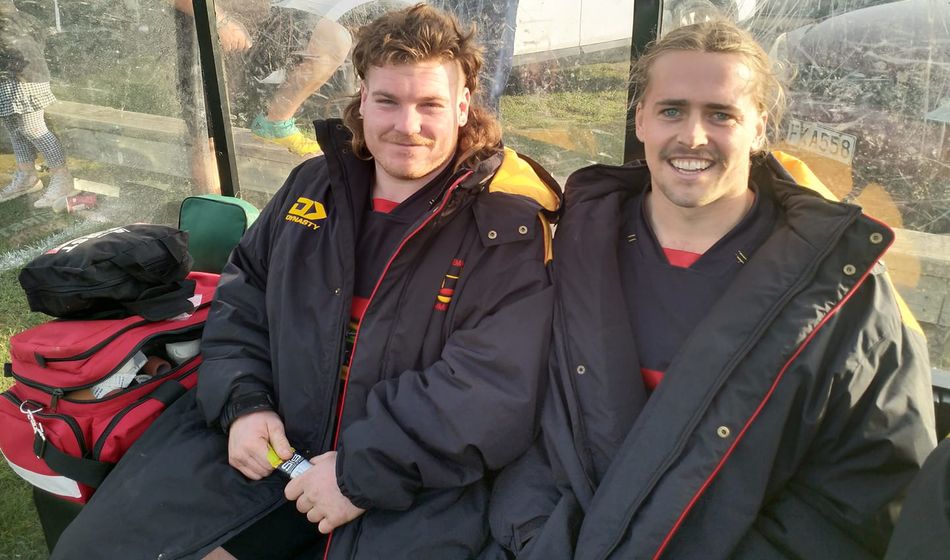 Above: Former Paremata-Plimmerton Juniors Jimmy Moore and Tyler Cannel among a growing number of former Juniors returning to play Premier rugby at the club.

Paremata-Plimmerton is finally starting to see a steady flow of former junior players return to the club.

It was a conversation club stalwart Paul “Softy” Latham had with two First XV players at Aotea College in 2011 that confirmed what he had suspected for a long time and was contributing to the drought of former juniors returning to the club.

He asked these two former Paremata-Plimmerton Juniors where they were going to play rugby when they left school the following year.

“Why is that” Latham asked.

“Because we want to play Premier rugby.”

“Are you going to play Premier as soon as you leave AC?”

Paremata-Plimmerton won promotion through to the Hardham Cup (Premier 2) in 2014 and were accepted in the Swindale Shield competition the following year in 2015.

That one day has arrived, as a number of former Club Juniors are now representing Paremata-Plimmmerton at the Premier level, and Softy gets a kick out of seeing one of those students he had the conversation with back in 2011 Luke Omeri being a permanent fixture in the Premier side in 2020, having made his Premier debut in 2018.

“It’s awesome to see Luke starting to realise some of his potential, and he knows what it means to represent the club, his family and his community, and to see him doing it in the Pare-Plim colours is pretty special,” Latham said.

The tide is starting to turn and as the club who has a junior playing base of 4-500 junior players each season is beginning to see them filling the playing rosters across all teams.

The challenge remains for Paremata-Plimmerton about how to retain connected with its former juniors who attend up to 12 different Colleges across greater Wellington.

“Keeping connected with our juniors as they journey through the school system is a key focus of mine” says Game Development Officer Alex Taimalietane. “We know the opportunity to play rugby at all levels when a player leaves college is here for them at Pare-Plim, and while we have only regained Premier status in the past six years, juniors who have left in recent times have decided that when they leave college – Pare-Plim is a natural option for them.”

With the season now in full swing for Seniors and Juniors, the club is once again a focal point for rugby at Ngatitoa Domain and it’s as popular as ever on a Saturday.

With 26 Junior teams and five Senior teams for the 2020 season, Paremata-Plimmerton continues to be one of the largest clubs in Wellington, Club Captain Campbell Taylor said. “We really do provide an opportunity for rugby to be enjoyed at every level, whether that’s competitively or socially, and that is one of the main reasons our community and sponsors are so keen to support us,” Taylor said.

The club is looking forward to catching up with as many members past and present and juniors that have had an involvement with the club over the years at their Old Timers’ Day this coming Saturday, A reunion for Paremata-Plimmerton Presidents will also be held on Friday from 5pm. For more information email events@pareplimrugby.co.nz.

Nearly 10 years on Latham is hopeful that if he had the opportunity to have the same conversation with the current crop of former junior players at college they might have a different response, and respond with “to be in the first team to win a Jubilee Cup for Paremata-Plimmerton” (and that and another Premier Women’s championship title) is only a MATA of time!

Eastern suburbs focus for Premier club rugby in third round