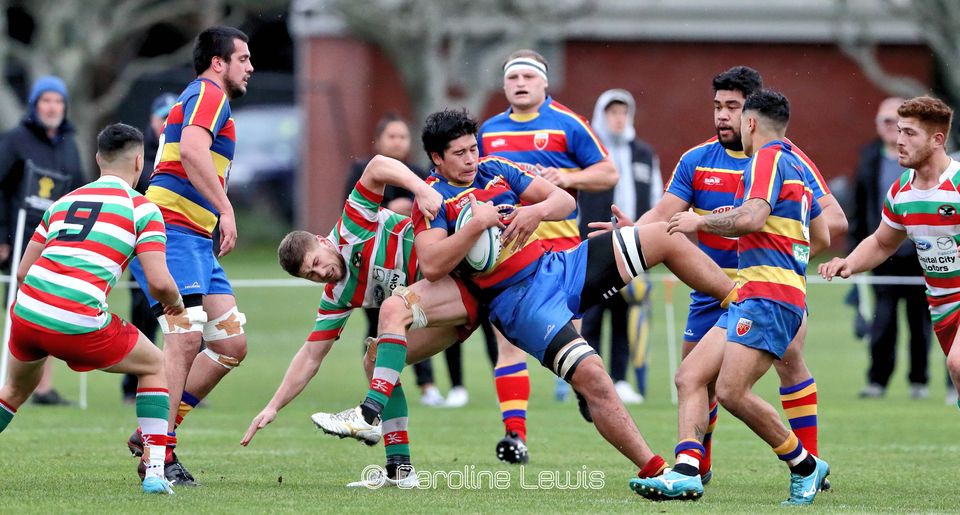 Above: Tawa clinched a 17-10 win over Hutt Old Boys Marist in the fifth round of the Swindale Shield.

Results at a glance HERE

Marist St Pat’s and Paremata-Plimmerton were two notable winners from today’s fifth round of the Swindale Shield, played in cloudy and at times drizzly conditions around the Wellington region.

MSP lit up the ashen skies above Evans Bay Park with a 42-6 win over neighhbours Oriental-Rongotai, to cement outright third on the standings behind joint leaders Old Boys University and Tawa.

At the other end of the standings, there were stirring scenes at fulltime at the Shark Pen as home side Paremata-Plimmerton held on to beat the Wellington Axemen 21-19 to register their first win of the season.

Tawa confirmed their title credentials by spoiling Hutt Old Boys Marist’s Old Timers’ Day with a 17-10 victory over the Eagles, while OBU were 38-7 winners over the Upper Hutt Rams at fortress Wellington College.

Petone are now fourth after beating Petone 28-20 for the F.J. Tilyard Shield at Kilbirnie Park, while Northern United pulled clear of Johnsonville to win 38-9 at Helston Park and Wainuiomata were pushed hard by the Avalon Wolves at William Jones Park in winning 31-24.

MSP were clinical against Ories, winning six tries to nil. Wing Willie Schutz and flanker James Tuiatua both bagged braces for the scarlets as they bounced back from last week’s defeat.

Paremata-Plimmerton came back from a 7-19 deficit to beat the Axemen, right wing Jordan Clark scooting away to score a 50 metre converted try off a Wellington Axemen dropped ball in midfield for the winning score.

In an evenly contested match, both sides failed to take their chances in the opening 30 minutes as the scoreboard operators remained untroubled.

The match then came alive after an all-in fight involving several players from both sides and a general melee in centre field. Wellington first five Matt Goosen was sinbinned as a consequence.

In his absence, Paremata-Plimmerton finally made one of their chances stick and left wing Zane Ainslie was the try scorer that put them up 7-0.

Goosen returned from the sin-bin to score a sweet try from an attacking scrum and it was 7-7 at halftime.

The Axemen opened the second half with two consecutive tries, Goosen putting in a cross-kick for wing Cameron Hislop and No. 8 Malifa Chapman scoring after a penalty and attacking scrum.

Bringing on fresh legs and digging deep, Pare-Plim replied with a  try off a lineout drive to last week’s centurion Shane Hedges, before Clark’s runaway and conversion to flyhalf Justin Wilson.

Pare-Plim, who were guilty of conceding a steady banquet of penalties, held their discipline and held off the Axemen over a tense final few minutes.

At William Jones Park, the Avalon Wolves were right in the contest when right wing Reihana Dalton atoned for a stint in the sin-bin for a slap down by scoring a 33rd minute try that drew them level 14-14 with Wainuiomata.

Midfielder Tyler Tane scored on halftime for the home team, giving them a 21-14 lead at the break.

But Avalon centre Chris Aumua scored for the Wolves which pegged the deficit back to 21-19 and it was game on.

But a penalty to Tyler Tane and a match sealing try with a few minutes to play to replacement back John Monu, running off his brother Eden, followed and Wainuiomata retained the Anthony Waldrom Trophy.

Norths retained the Barlow Trophy against the Johnsonville Hawks but they trailed 9-5 at halftime.

Norths then scored 32 unanswered points and five tries in the second half to take the win. Te Kahui Bishop and Josh Hunt both finished with doubles, while Losi Filipo and Tana Salzmann also found the whitewash.

OBU retained the Bill Brien Challenge Trophy with their win over the  Upper Hutt Rams, who turned up at Wellington College all guns blazing and making some of their tackles felt.

OBU would win the war of attrition and the Goats’ bench added extra firepower that the Rams’ couldn’t match and they galloped clear to win well.

It was a similar tight battle at close quarters at the Hutt Rec, where Tawa pushed clear in the second half to hold on and prevail.

Momentum swung back and forth at Kilbirnie Park where visitors Petone held on over the final several minutes to take a hard-fought victory.

Petone opened the contest with a pair of penalties, before Poneke took a 7-6 lead through a try to blindside Cole Stewart.

Poneke went ahead 17-13 when Isaac Moe-Jenkins scored from fullback, but Petone’s Logan Henry scored to put Petone up 20-17.

Robson slotted another penalty and it was all square with the clock winding down. But a dominant scrum and impact off the bench would prove telling for Petone who scored through pivot Carne Green to put them up 25-20.

Petone fullback Piri Paraone closed the scoring with a penalty, while Robson missed a penalty with a few minutes to play that kept them out of bonus point range.

A feature result of the Premier Reserve Harper Lock Shield was Poneke and Petone’s 43-43 draw in the early game at Kilbirnie Park, which concluded with an equalising sideline conversion by Petone’s kicker on fulltime.

At the top of the Premier Reserve standings, Norths soared to their fifth straight bonus point win with an 83-0 over Johnsonville.

MSP’s second team took their fourth win on the trot to cement second with a 26-22 win over Ories. Avalon beat Wainuiomata 20-13 in another close fixture, while HOBM beat Tawa 29-24 in the minor upset of the round.

In Women’s rugby, Norths took maximum points with a win by default over Avalon, while Oriental-Rongotai returned from a fortnight on the sidelines to slay the Old Boys University Impalas 95-0. Paremata-Plimmerton regrouped from their default last week to beat Poneke 71-0.

For Paremata-Plimmerton, the Burgess sisters scored five of their 11 tries, first five-eighth Tawny scoring four and halfback Sherri one.

The closet match of the fourth round of Rebecca Liua’ana Trophy matches was Hutt Old Marist’s 27-22 win over the Petone Ponies at home.

Petone scored again early in the second half, but HOBM crossed again after a patient build up. Petone hit back again through halfback Milly Mackey from a scrum but HOBM fullback Tyler Bentley would score her second try and centre Maryann Collins kicked a penalty to give them breathing space.

In round four of the Paris Memorial Trophy Colts competition, OBU Green and HOBM Green both won their third games in four matches, but in contrasting circumstances.

Norths Blue beat Johnsonville 47-5, while Norths’ second side beat the Wellington Axemen 71-24. Petone were too strong for Poneke in their 59-7 win in the fifth game.

It’s the OBU Scallywags who lead the U85kg JC Bowl competition after edging MSP 22-19 today, as defending champions Avalon returned from their bye to beat Poneke 54-10, Eastbourne accounted for HOBM 28-17 and Wellington beat the Wests Roosters 26-15.

In a school match today, Palmerston North Boys’ High took down Wellington College 57-0 in the Manawatu.

Highlights and report: Wellington and Manawatu draw in NPC pre-season