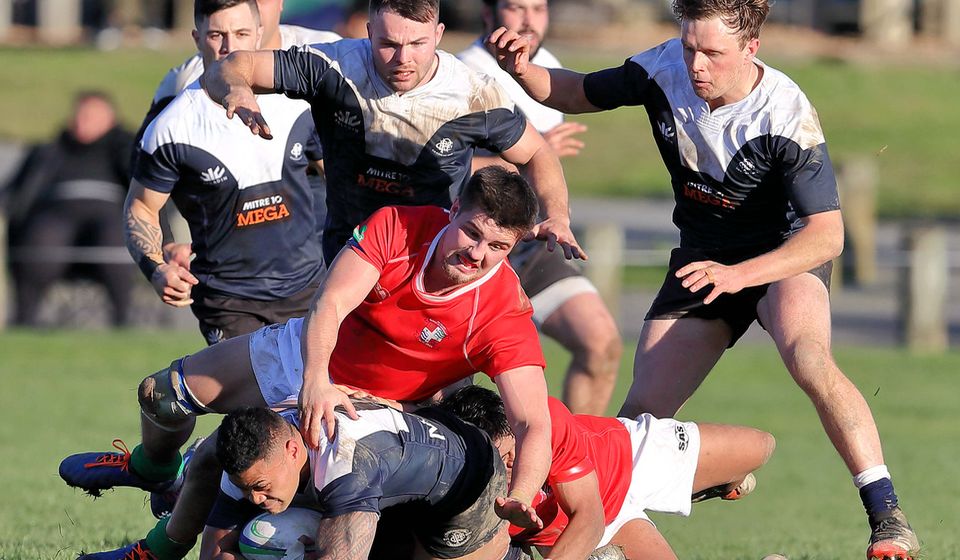 UPDATED: Tomorrow see’s one-third distance reached in the Premier season with the fifth round of the Swindale and Harper Lock Shields, with it again looking like ideal mid-winter conditions for playing rugby.

No fewer than three players rack up centurion milestones tomorrow; two in the black and white hoops of Oriental-Rongotai. After missing out two weeks ago, hard-running midfielder Fa’asua Makisi will become the third Ories Women’s player to reach the number, joining Rebecca Liua’ana and Joanah Ngan-Woo, when she runs out against Old Boys-University while later that afternoon Sean Hay will do likewise when Ories meet MSP at Evans Bay. In a twist of fate it’s the same fixture that Hay made his Premier debut in back in 2008, only then it was for MSP against Ories.

Across the road at Kilbirnie Park Galu Taufale will achieve 100 Premier caps for Poneke (who only count starts), though with a career stretching back to a long association with Wests and before that Johnsonville it’s our estimate he’s played at least 180 Premier matches in the capital.

Just two teams remain unbeaten, but if Tawa and Old Boys-University want to keep it that way then tomorrow they’ll each have to overcome a tricky assignment in the fifth round of matches.

Table leading Tawa have the more difficult of the two, as they head to the Hutt Rec to face Hutt Old Boys Marist. The Eagles are one of the clutch of teams sitting one win off the top needing to atone for blowing a big lead against Norths, and perhaps there’s no better time to do that than on their Old Timers Day against the competition leaders. Tawa come off a win over Ories that was nowhere near as comfortable as the scoreline suggests, and would have had to nurse some sore bodies during the week.

HOBM are without Chase Tiatia but retain Salesi Rayasi, with the backline shuffle seeing the latter to fullback, Tomasi Alosio moving to centre, and veteran winger Fereti Soloa restored to the left wing. In the pack Ben Power returns to join the Manaia brothers up front, and Josh Brown also returns albeit at lock. Tawa however have several changes, with Tony Coburn, Robb Carr, Eamonn Carr, Sio Fidow, and Tavita Logovae all elevated to the starting pack, while their back division has Ryan Preston at centre and Tom Maiava sliding back to fullback.

Just a point behind, Old Boys-University have again opted to take their match to Wellington College to take on the Upper Hutt Rams. The Goats schedule is heavily front-loaded – presumably to allow their usual base at Nairnville to be prepared for the cricket season – and they have just two games at home after this the rest of the way. After dispatching Johnsonville, they’ll again want to bank maximum points ahead of the run to come. They’ve chosen to give forwards Paddy Carter, Caleb Delany, and Shamus Hurley-Langton a breather by putting them on the bench, Dale Sabbagh and Callum Harkin swap places again, and Sam Reid pushes up into centre.

The Rams got the job done on their Old Timers’ Day over Avalon but know they’ll face a tough ask against one of the frontrunners. After making his Hurricanes debut last week Murphy Taramai returns to the Rams where he’s one of several changes in the forwards, with Kaide McCashin at halfback the only one in the backline.

The eastern suburbs play host to pair of matches in the midtable scrum. On the eastern side of Evans Bay Parade neighbours Marist St Pa’ts and Oriental-Rongotai go at it, while on the west decades-old rivals Poneke and Petone meet with their F.J. Tilyard Memorial Shield at stake.

At Evans Bay Marist St Pat’s will be looking to return to winning ways after their narrow loss to Petone, but Oriental-Rongotai will be stung be their loss away at Tawa and will determined to address a start to their season that hasn’t quite lived up to their expectations. MSP make just two changes with Charlie Gubb coming into the forward pack and Tom Horan out with a bit of reshuffling, and Hurricanes halfback Jonathan Taumateine again available. Ories have a host of changes; Hay starts in his milestone match with Tevita Mafileo, Ronaldo Seumanufagai, and Jahzeel Marais all given starts.

Across the road on Kilbirnie Park Poneke would dearly like to celebrate Taufale’s milestone in style as well as keep in touch with the leading pack, while Petone would be aiming to keep the momentum and belief gained from last week’s narrow win over MSP going. The hosts make a handful of changes with Andrew Jones returning to the hooking role, and without Simon Hickey this week Caleb Robson reverts to 10 and Psalms Latu is back at centre. Petone give a first Premier start to former Silverstream Head Boy Iona Apineru, with captain Jacob Gooch also returning and perhaps surprisingly Tupou Sopoaga heading to the bench. Backs Jarrod Adams and Viliami Fine remain out due to injury.

First contested in 1958, the Tilyard Shield (pictured right) commemorates Fred Tilyard. One of four brothers, he was a 1923 All Black, he was a Wellington representative for seven years, a four-time championship winner with Poneke and served that club for over 20 years as an administrator. His brother Jimmy also achieved national honours, while Harry and Brun also played for Wellington. Petone hold it after their 23-17 win in the Swindale meeting last year, but Poneke won the reverse meeting 24-13.

Looking to gain from all this are Norths, who might have kicked their spluttering campaign into life with their comeback win over HOBM, and they head down the road to face winless Johnsonville at Helston Park. They’re taking the opportunity to give game time to some of their fringe players with first starts for forwards Sanasco Crichton, Josiah Tavita-Metcalfe, and Boston Hunt, and rare Premier outings for veterans Josh Hunt and Dudley Parsons. There’s also two interesting names on their bench in former Tawa pair Tolu Fahamokioa and Sam Clarke. Johnsonville coach Roy Kinikinilau has sprung a surprise naming himself at centre alongside brother Paula, with Irishman Mark Sutton shifting from halfback to first-five.

Norths will defend the Barlow Trophy. Bert Barlow played for Johnsonville before moving to Titahi Bay where he had a long association and held several roles. The Hawks last won this back in 2013 when they beat Norths’ second side in the old Senior 1 grade, and the closest they’ve come at the Premier level was in 2015 when Norths narrowly won 26-24

The remaining matches feature teams looking to close the gap to those above them. Wainuiomata are at home at William Jones against winless Avalon, and like those sides immediately above them on the table will be keen to take the maximum five points on offer as they did against Wellington. They won’t have Peter Umaga-Jensen this week as he’s back on Hurricanes duty with veteran Isaiah Mamea taking his place while coach Daniel Farani puts the boots on to lock the scrum. The Wolves have had a tough time of it this year so far and probably can’t wait to get back home to Fraser Park having had the opposing draw to OBU – they hit the road just twice after tomorrow. They have an injection of Super Rugby experience with Crusaders prop George Bower poised to play his first Premier game for Avalon in seven years, with a return also for flanker Logan Blake.

They’ll play for their Anthony Waldrom Trophy for the third time, having been won by the Wolves 33-32 in it’s first playing in 2018 and then by Wainuiomata 33-3 last year. Father of Avalon’s international brothers Scott and Thomas, Anthony was himself a Wainuiomata player.

Finally, two teams that have played out some close matches in recent years meet at Ngati Toa Domain with Paremata-Plimmerton hosting Wellington. The home team have been better than their output so far suggests and gave Poneke a scare in the second half last weekend, and tomorrow is a game they’ve targeted. They’ll be keen to get a repeat performance from fullback Kayden Muller who was outstanding last Saturday, as their side is relatively settled with just three changes. The Axemen have endured a bumpy time since their first-up win over Avalon, and will have likewise circled this on the draw as a must-win. They’re also very settled with an unchanged pack, and the return of Matthew Goosen to their backline.

As normal, all seven matches are at 2.45pm

In the second-tier leaders Norths should have few problems when they take on bottom-side Johnsonville at Helston, while the only other unbeaten side – Ories – have a more challenging assignment at Evans Bay against fourth-placed MSP. Despite losing last weekend Tawa are still third and take on midtable HOBM at the Hutt Rec, and fifth and sixth meet at Kilbirnie with Petone visiting Poneke.

There’s another midtable scrap at Nairnville with OBU facing Stokes Valley who opened their account last week, and two more at the foot of the table with Wainuiomata up against Avalon at William Jones and Paremata-Plimmerton meeting Petone B at Ngati Toa.

With Stokes Valley on the road, all seven matches are at 1pm this week.

After successive weekends with defaults, any hopes of having a full slate this weekend have been dashed by Avalon having to concede their match to Norths, meaning the latter go to the top of the standings for now. Oriental-Rongotai will look to join them when they come off two weeks break to host Old Boys-University at Polo, as will Petone when they cross the river to play Hutt Old Boys Marist at the Hutt Rec. The fourth match has the two sides that have defaulted in the past weeks – Poneke and Paremata-Plimmerton – clashing at Kilbirnie Park.  Marist St Pat’s have the bye.

There’s a chance for the top four in the Colts grade to put further distance between themselves and the rest. OBU Green are in the cage at Ian Galloway against the Upper Hutt Rams, HOBM hosts Tawa at the Hutt Rec, Norths Blue are at Helston against Johnsonville, and Petone are at Kilbirnie to take on Poneke. The remaining match has Wellington returning to Porirua Park, this time to face Norths White, with OBU Black on the bye. All five matches are at 1pm.

Under 85s leaders the Upper Hutt Rams have the bye this week, meaning others have the chance to close the gap to them. The OBU Scallywags can overhaul them when they host MSP in a 1pm match at MacAlister Park but are yet to have their bye, while Avalon can join the Rams in making it three-from-three when they face Poneke at Fraser Park. Winless HOBM will look to get off the mark when Eastbourne visit the Hutt Rec, and on their Old Timers Day Wests welcome Wellington to the Cage at Ian Galloway. The latter 3 matches are all at 2.45pm.

It’s the second week of the school holidays so there’s no college rugby, which resumes next week. Wellington College play Palmerston North Boys’ High School tomorrow at 1pm (away).

From the Chatham Islands to the JC – Sam Clarke