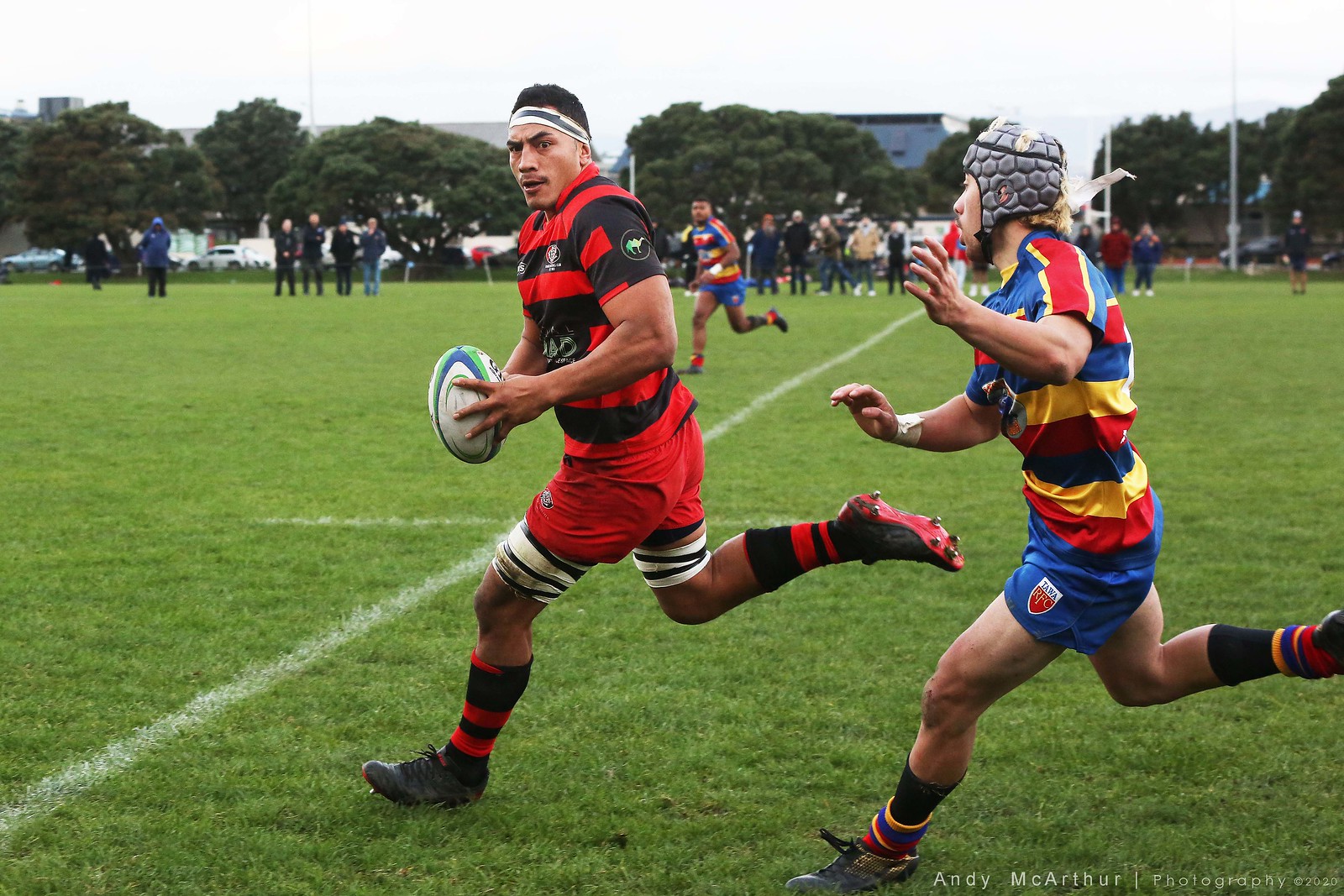 Above: Galu Taufale in action last weekend against Tawa. He makes his 100th Premier start for Poneke against Petone on Saturday.

At the end of 2016, and after nearly a decade in club rugby, Galu Taufale entertained thoughts of hanging up his boots and starting a career as a firefighter.

When 2017 was done and dusted the unrelenting lock and loose forward had captained Wellington and made his international debut for Samoa.

This Saturday Taufale will celebrate his 100th game for Poneke when they host Petone at Kilbirnie Park for the F.J. Tilyard Memorial Shield. At Poneke only starts are acknowledged as caps.

“When Petone celebrated their 125th Jubilee they chose to play Petone and Poneke did the same thing. We are two of the oldest clubs in Wellington with a strong relationship and competitive rivalry. It is special to play my 100th against them. I haven’t beaten Petone too often, but I hope we can get the W on Saturday,” Taufale said.

The Tilyards were a famous Poneke family. There were four brothers. Fred and Jimmy were All Blacks while the other two, Harry and Brun, played for Wellington. Their trophy has been contested since 1958 and Petone enjoys a 44-14 winning advantage.

Last year All Black Dane Coles played the first half for Poneke and scored a try only to be replaced at halftime as per his allotted playing minutes coming back from injury. Petone rallied from behind to win 23-17 and secure their place in the Jubilee Cup.

Born in Samoa and raised in Wellington’s northern suburbs, Taufale played his junior rugby for Johnsonville, went to Newlands College, and returned to Johnsonville to start his senior career in their Colts and Premier teams. He then moved up the road to the Wests Roosters for four seasons before heading to Poneke in 2012 where he has forged a formidable reputation as a “street kid.” What does Poneke’s notorious nickname mean?

“We’re not afraid to show a bit of mongrel. We don’t have the flashiest backs and sometimes you have to stick your head in the dark places to get a good result.”

He scored a try on debut against Rimutaka in 2012 and bagged a hat-trick against Wests later that season. Any match against Marist St Pat’s and Ories are akin to “test matches.”

The 2016 season was a breakthrough year for Taufale. Poneke missed the Jubilee Cup semi-finals after Matt Jacobs landed a 50-meter penalty close to fulltime to eliminate the red and blacks from contention.

“I still can’t believe Matty kicked that. We had a bloody good team that year. With 15 minutes to go, we had a penalty in front of the posts which we turned down to go for a try which we didn’t get. In the same game, one of our players got a short ball and dropped it over the line. It was a real heartbreaker,” Taufale recalled.

His superior form didn’t go unrecognized and an international call up occurred in June 2017 when he debuted at openside flanker in Samoa’s 17-19 defeat to Wales in Apia. He played again in their 26-30 loss to Tonga in Nuku’alofa on 1 July. His last test was off the bench in a 16-38 defeat to Fiji in Apia.

Paid employment in the game was secured in 2017 when he was contracted to the Wellington Lions. In fact, his leadership has been essential in lifting the Lions from the championship in 2017 to runners up in the premiership last year.

In 2017 Wellington won the championship with an extraordinary 59-45 extra-time victory over Bay of Plenty in the final. Earlier Taufale was skipper in the 61-12 slaying of Southland. He captained Wellington again in 2018 when they were toppled 22-28 by Tasman. He has played 31 games for the Lions and credits former coach Chris Gibbes for Wellington’s resurgence.

“He’s an awesome coach. He knows his stuff and brings the best out of his players by being hard-noised and fair. When he asked me to be the captain, I accepted straight away. I like the culture he’s helped establish.”

Taufale has established an unmistakable bond with Greg Foe. The pair could have played their 100th game together last year but Taufale fractured his ACL.

“Greg is one of my best mates at Poneke. We started at the same time and have played for Wellington and Samoa. We’ve got a lot in common off the field too,” he revealed.

Poneke is 2-2 in 2020 but their two victories have been unconvincing successes over lowly Johnsonville (18-11) and Paremata-Plimmerton (36-21). Petone has scored three impressive wins and lost on a cruel bounce against Wainuiomata.

“It’s a really competitive competition now. At least eight to ten teams can beat you on the day and if the likes of Pare-Pimm get their tails up it is going to be a tough afternoon. We will have to be at our best to beat Petone,” Taufale observed.

In addition to rugby, he is employed by Hiremaster and at present is making marquees for the new Avatar movies.

His three children aged ten, seven and two will be present on Saturday.

Poneke vs. Petone kick-offs at Kilbirnie Park at 2:45 pm.

Fine ? Running out against Petone Rugby Club this weekend, @g_taufale will celebrate his 100th cap for the premier men’s team. This milestone shows dedication to club and adopting everything we’re about – you belong

Throwback Thursday With @goactive.wellington – Active Electrical Suppliers Ltd – Wellington Last year when they met in the first round for the FJ Tilyard Memorial Shield, @petonerugby came from behind to beat @ponekefc 23-17. The two teams resume their almost 14 decade rivalry when they meet this Saturday at Kilbirnie Park. Poneke's Galu Taufale will be playing his ? th Premier match – see our website for our story with him. #clubrugby #swindaleshield2020