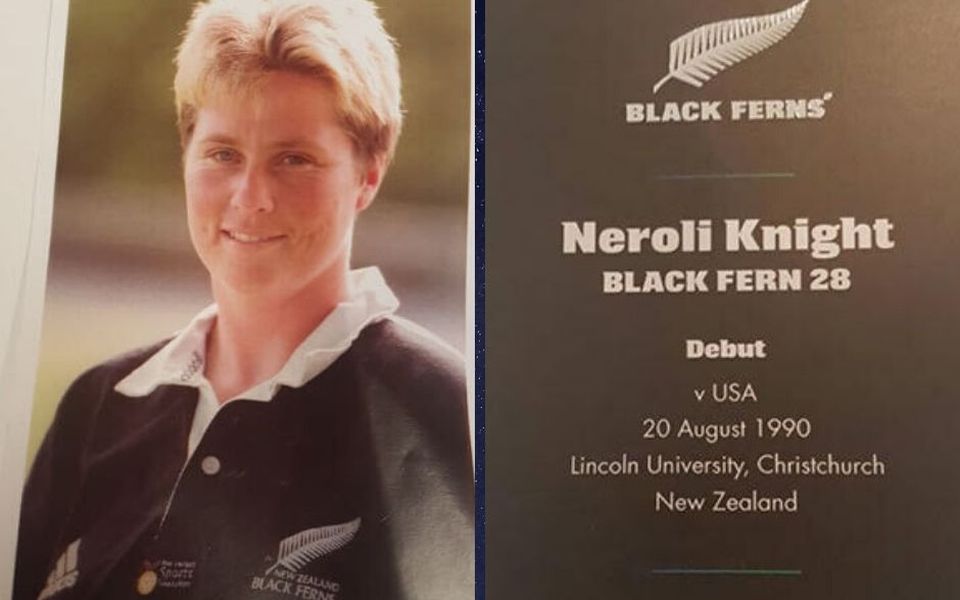 Neroli Matautia (nee Knight) was a high school star who kicked on to to enjoy a 22-year senior career.

On August 26, 1990, Knight became possibly the youngest ever rugby international when she debuted for New Zealand aged 15 years, 11 months, and 7 days old against the Netherlands at the RugbyFest in Christchurch.

Knight broadened her horizons further in 1991 when she attended the Rugby World Cup in Cardiff.

The inaugural tournament was organised by four English women who mortgaged their houses, absent of official support from the International Rugby Board. New Zealand was beaten by eventual champions USA in the semi-final.

Knight, the youngest player in the New Zealand team by four years, played a warm-up match against Saracens but suffered a hamstring injury ruling her out of the tournament.

However, she did play in the third-place playoff against France in which New Zealand was beaten 0-3. The match is recognised as an official international in France, but not in New Zealand as the fixture was organized outside of the tournament which decreed both teams tied for third.

Knight’s pioneering spirit and talent was recognised by College Sport Wellington when she was named Wellington Secondary Schools’ Rugby Player of the year, defeating the all-male opposition.

A Petone junior, she went on to play 14 seasons for Wellington and scored 161 points. She appeared for the following clubs: Petone, Wellington, Stokes Valley, and Hutt Old Boys Marist.

The first-five finally earned her official test cap in 1999 when she debuted against Canada in Palmerston North.

Knight earned a tour to Maple Leaf country in 2000, identifying Canada as her favourite place to tour.

Her last international was off the bench against England in 2001, a team Knight respected greatly for their tough, organised and skillful play.

A remarkably durable player, Knight recovered from three major injuries in her career.

“My most serious injuries were a broken ankle after scoring a try, a dislocated AC joint in my shoulder from a rather large player falling on me and having my ear ripped off in a tackle. Not too bad for 22 years,” Knight laughed.

Knight’s rugby began at the Redwood Town Rugby Club in Blenheim in 1982 when she was eight years old.

“I filled in for my brother’s team from the sideline when they were short one player and scored the winning try in the game. From that point on they wanted me in their team so I played each year and was always the only girl in the boys’ teams,” she reflected.

Knight has a comically affectionate nickname from rugby which has stuck even to this day.

“My nickname is ‘Bart’ after Bart Simpson. The Simpsons came out in 1990 and that was the first year I played for New Zealand. I had a spiky haircut like Bart and so that was the name given to me and it stuck. Even today Mum calls me Bart.”

Knight was a Hutt Valley softball representative and made the New Zealand Secondary Schools’ side in the code.

She changed her name in 2009 when she married Benhur Matautia, a pastor at the Waihi church. Together they studied theology and Neroli practiced in Hawaii, Cambodia, and Samoa. Benhur is an accomplished boxing coach.

Last year over Queen’s Birthday weekend the Stokes Valley Rugby Club held their 70th Jubilee where Neroli was an honored guest by the Club and received a special medal.

Today she is a primary school teacher and coaches juniors at the Waihi Athletic Rugby club.

Lui Paewai was playing representative rugby as a 16-year-old and debuted for the All Blacks against New South Wales aged 17 years, 36 days old in 1923. It wasn’t an official test match.

Craig Wickes was the first Schoolboy to play rep footy aged 17 and debuted for the All Blacks against Fiji in an unofficial test aged 18 years, 200 days old in 1980.

For 89 years league and Union International Edgar Wrigley held the record for the youngest player to represent the All Blacks in a test when he appeared in his only international against Australia against aged 19 years, 79 days old in 1905.

At only 19 years and 45 days, Jonah Lomu (MNZM) became the youngest All Black test player ever, when he debuted on the wing against France in 1994.

Special thanks to Paul Mulvaney for adding additional material for this story.

One thought on “A dame of Women’s Rugby – Neroli Knight”