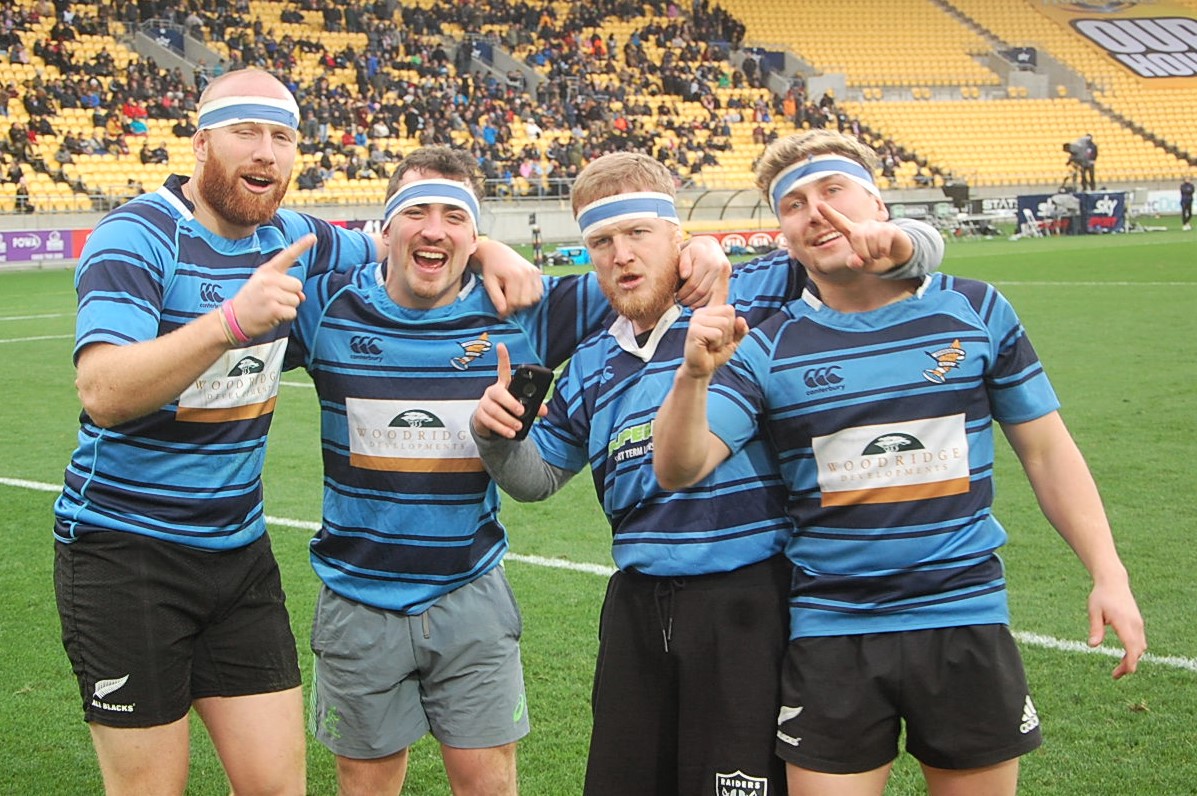 UPDATED: Round four of 13 of Wellington Premier club rugby is in the can, with just Tawa and OBU left standing as the two unbeaten teams and a further eight sides with two wins under their belts and realistically still in the race to qualify for the Top 4 and a chance to win the 2020 Jubilee Cup.

In fact, from a neutral perspective, which we are, tight wins for both Norths over HOBM and Petone over MSP this past Saturday were good for the competition as if these results had gone the other way then a distinct top four would have opened up.

More to come, but Swindale Shield matches this coming Saturday in round 5 are:

The college rugby draws including the Premiership First XV schedule, have been released this morning. First game next Wednesday between St Pat’s Town and Silverstream.

Rugby is said to be a game for all ages and Wainuiomata perhaps took that to an extreme on Saturday with their locking pairing. In his first year out of the local high school teenager Zamian-Ray Blake made his starting debut, but he’s not even half as old as his 40-something partner in the engine room Dan Cherry with the latter taking over from clubmate Uale Mai as the oldest player to start a Swindale game this season.

Great to see Josh Svenson back in rugby. Had a horror run with shoulder injures. The former flanker bagged two tries for the Upper Hutt Rams against Avalon on Saturday.

Oriental-Rongotai’s Harper Lock Shield side might be unbeaten and trailing only a rampant Norths on the table but they do like a close match, with their two-point win over Tawa on Saturday their third win so far this year of five points or less.

Stokes Valley’s top side delivered the goods on their Old Timers’ Day beating Avalon’s second side 15-5. It was their first win in the second tier since they beat Pare-Plim in the old Senior 1 grade in 2011, a season that ended with them being relegated.

Jackie Patea-Fereti was honoured for 50 games for Petone, but didn’t actually play because of a default. Nonetheless, stirring senses and a haka was evident in a show of respect and achievement for a champion Black Fern at the Petone clubhouse.

Great to see former All Blacks giving back to the game. Ma’a Nonu played a full match for the Ories Premier Reserves and the came off the bench for the last 10 minutes for the Premiers.

Probably not a stretch to say this, but Saturday would have to be the first time an All Black centurion played 80 minutes for his club’s B team wouldn’t it?

Additionally, Jason Eaton came on for the last 20 minutes for the OBU Premier Reserves against Johnsonville.

His locking partner was club stalwart Paul Swift, playing his first game of the year. Swift is the current coach and started playing for OBU back in 2006.

A couple of other comebacks in the Premier Reserve grade on Saturday. Ories’ 2011 Jubilee Cup winning first-five Trevor Marama returned to Wellington rugby after few years away, pulling on Pare-Plim colours in their loss to Poneke; while Tawa’s Philip Finau made his return to the field three years after suffering serious injuries in a motor vehicle accident

It has been put in this column previously, but how hard can it be for Premier teams to put players in the right numbers? Makes reporting games with accuracy harder than it should be.  Similarly, all Premier venues should be obliged to have scoreboards and all teams should be compelled to submit their try and point scorers before 6pm on Saturdays.

He’s normally known for high-scoring matches, but leading Wellington referee Richard Gordon found things a little different in Auckland as he oversaw an 8-6 scoreline between Manukau and Papatoetoe in their Premier competition.

In Hawke’s Bay, A veteran and former Magpies representative was reported to be well on the way to recovery after being revived by clubmates following a suspected heart attack during a Premier grade club match in Napier on Saturday, reports the Hawke’s Bay Today

Colin Mataira, 46, a stalwart of Hastings club Tamatea, lay motionless for at least 10 minutes on the field at Whitmore Park, Marewa, before being rushed by ambulance to Hawke’s Bay Fallen Soldiers Memorial Hospital in Hastings.

Hawke’s Bay Rugby Union commercial manager Dan Somerville said on Sunday morning Mataira had remained in hospital overnight and was able to talk with family before being taken to Wellington Hospital for further tests.

A Hawke’s Bay Magpies prop for a short time in 2003 and former Tamatea Premier captain, he had come on just before halftime as a substitute for Hastings club Tamatea in its match against Napier Technical.

In Auckland, a mass brawl left supporters and players ‘bloodied and bruised’, as Stuff reported:

An altercation on the field, at Shadbolt Park in New Lynn, which saw a player from each of the Suburbs and Pakuranga sides red carded, boiled over after the full-time whistle on Saturday.

Supporters from each sideline exchanged words before multiple punches were thrown – leaving several men “covered in blood”, a witness said.

A group of around 20 people were believed to have been involved in the fight, police confirmed, but when officers arrived everyone involved had left and police did not end up speaking to anyone.

In Waikato, a rugby player, believed to have been playing in an U85kg match, was flown to Waikato Hospital with serious injuries after being hurt at the Ōtorohanga Sports Club on Saturday.

Short Passes wishes him all the best.

Nineteen of the last 23 games between the Highlanders and the Hurricanes have been decided by less than a converted try.

What about a women’s North v South match?

The Hurricanes Youth Rugby Council Inc. is now inviting eligible secondary schools within the Hurricanes region to enter a one-off boys’ competition (consequent to the COVID-19 crisis), for the “Hurricanes Life Members Cup“.

Each member Provincial Union is responsible for determining its team to compete in this knock-out competition, with four Wild-Card entries to be selected by the Council’s Operations Committee from entries received by Provincial Unions.

The intent of the Cup is to promote rugby within our Heartland and non-traditional rugby schools. Provincial Unions when selecting their representative will be mindful of this intent.

It is set to run from mid-August until mid-September.