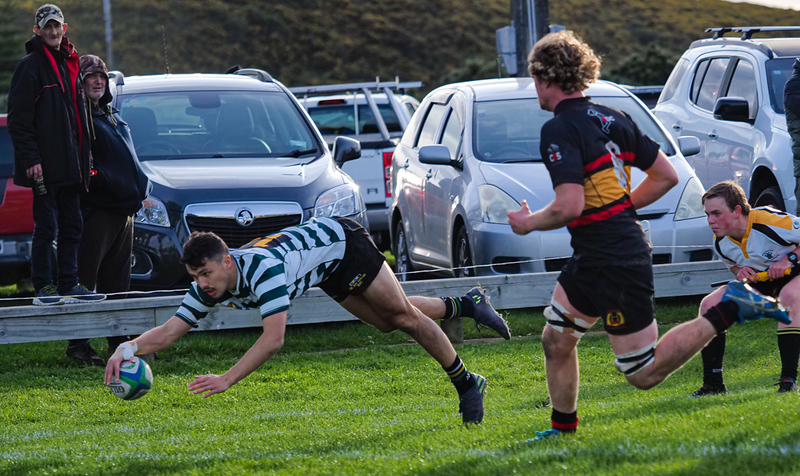 UPDATED: Three weeks in, and most teams are well into the rhythm of the season. Tomorrow some can extend their good starts and put some distance between them and the pack, while others need results or can end the leading quartets unbeaten starts.

It’s a milestone day for two players. A week after his teammate Vince Sakaria achieved the mark Andrew Wells brings up his century of appearances for MSP against Petone, while Shane Hedges becomes the first player in Paremata-Plimmerton’s history to reach 100 Premier appearances when he runs out against Poneke.

If last week’s matches seemed fairly ho-hum affairs in the main, this week’s has the promise of some real fireworks with a number of matches between sides in the top half of the table.

Leading the way by a narrow points difference margin are Marist St Pat’s, who head up the motorway to take on Petone at the Rec. MSP subdued Wainuiomata last week, meaning they’ve already accounted for both of last year’s Jubilee Cup finalists and last season’s slow start is just a memory. If not for the inexplicable brain explosion that cost them against Wainuiomata two weeks ago Petone would also be unbeaten but can make a real statement of their intent this season if they were to win tomorrow.

Injuries remain a problem for the Villagers with a serious-ending knee one for veteran prop Marcus Roil the latest, but they get bowling ball Pasi Uluilakepa back, with Logan Henry and Carne Green restored to the halves and Piri Paraone returning to fullback. MSP bring back James Tuia and give Keelan Whitman a start at No8, with Ken Kapeli starting at halfback. There’s plenty of thump on their bench too, with heavy hitters Valentine Meachen, Charlie Gubb, and Pago Haini all lurking there to provide impact.

The other two joint-leaders will be found not too far from each other. Hutt Old Boys Marist head to Jerry Collins Stadium to take on Norths looking to keep pace at worst and knowing that the venue has been a happy hunting ground for them in recent times. Norths got off the mark by routing Wellington last week but need to continue that or face having just one win from their opening four games and leaving themselves plenty of work over the remaining weeks.

The home side make just two changes from last week’s side, having Jackson Garden-Bachop released to them from the Hurricanes and Campbell Woodmass making his first appearance of the year. Opposing them, the word ‘stacked’ surely applies to the Eagles backline for tomorrow, with both Salesi Rayasi and Chase Tiatia featuring alongside Pakai Turia, Brandyn Laursen, and Tomasi Alosio, with both Fritz Rayasi and a returning Glen Walters available from the bench. Up front Rei Manaia returns to partner Brett in the front row.

Just down the road at Lyndhurst Park Tawa host Oriental-Rongotai. The home side are perhaps lucky to still be unbeaten after surviving missed late penalty against Poneke and will be under no illusions that they face a strong test tomorrow to keep it that way. They’re able to bring back several players who missed that match, including midfielders Lumafale Lualua and Tom Maiava and fullback Trent Renata who’ll face his old side, while part-time TV star James Coburn is back up front. Old stager Whetu Henry, Manu Maihi, and John Tuia all return to the Magpies pack along with Hinckley Siaosi at halfback as they look to continue their march up the table after their opening round loss. Utility Alex Ropeti starts at fullback in his 50th and blazer game.

By contrast, Old Boys-University have the most straightforward task of the top four when they host winless Johnsonville, and it’s not out of the realms of possibility that the Goats could be alone at the top come full-time tomorrow night. They’re also taking advantage of the school break with this match being played at Wellington College rather than Nairnville Park, which is considerably closer to their base at the Cambridge. OBU captain Jonathan Fuimaono returns to the starting side and joined at prop by Sam Combs, and a backline reshuffle has Callum Harkin and Dale Sabbagh swapping places and Jack Green replacing Olly Polsen.

Johnsonville are still looking to break that long winless streak and although it would be a massive upset if they were to achieve that tomorrow, they are an improved outfit on last year despite last week’s big loss. Without too many other options Roy Kinikinilau has stuck with largely the same team as last week, though his brother Paula comes into midfield.

Through the tunnel is the only match in the eastern suburbs tomorrow with Poneke hosting Paremata-Plimmerton at Kilbirnie. The home side missed a golden chance to beat Tawa and take valuable competition points and will almost certainly need to take them tomorrow against the side propping up the table. They will again have Simon Hickey available to them, all three of their veteran core of Galu Taufale, Cole Stewart, and Greg Foe start, and Caleb Robson deputises at centre for Psalms Latu.

Shane Hedges’ return to Pare-Plim’s starting lineup for his milestone match is one of many changes made by coach Justin Wilson, the most eye-catching of which is Tane McMillan-Parata starting in midfield instead of his usual loose forward role as they look to break their duck this season by taking down one of last years Jubilee Cup teams.

At the north end of the valley two sides that desperately need points if they’re to be a factor this year meet at Maidstone Park. The Upper Hutt Rams do have one win on their card so far and will be keen to add to that against an Avalon Wolves side that’s suffered heavy defeats the past two weeks. Again as of publishing we didn’t have their lineup but won’t have Murphy Taramai who is line to make his Hurricanes debut from the bench.

Avalon will need to be much better than they have in the past fortnight. They’re without not just Asafo Aumua after his cameo, but older brother Sefo as well. Younger brother Chris switches to the wing in one of two backline changes, while there are handful more in their forwards group.

The last match of this preview is at William Jones Park. Both Wainuiomata and Wellington will be licking their wounds after last week’s defeats and will be keen to return to winning ways. The home side get a boost with Peter Umaga-Jensen released to play for them after a solid outing for the Hurricanes last Sunday, with TJ Va’a also named for the first time this year. In the pack teenager Zamian-Ray Blake makes his starting debut, alongside 40-something warhorse Dan Cherry at lock. The Axemen are forced into several changes and will be without Sam Gard’ner nor Matt Goosen; Max Allen switches to the openside and Isaac Bracewell wears #10 this week with William Cosgriff taking halfback duties.

There are three interclub trophies in play tomorrow:

Petone and MSP will contest their Bill Elvy Memorial Trophy. Elvy was a Petone star of the 20’s, his son Norm played for both Marist Brothers and St Patrick’s Old Boys, and grandson Martin played for MSP. MSP hold this after their 50-24 win in 2018, with last year’s meeting ending 24-all.

Upper Hutt and Avalon play for their Harper Vine Trophy. Tammy Harper was a long time Taita player and the first person elected as a Life Member of Avalon, and had a long and intense rivalry with Upper Hutt’s Bob Vine. Donated by their families, the Rams hold it after their 61-24 win in the Hardham Cup last year after the teams didn’t meet in the Swindale.

Wainuiomata and Wellington have their Bill Jones Cup, again being played for on the ground named for the same man and Wainuiomata Life Member. The hosts are the holders, having won 28-10 last year.

And finally, OBU will be defending the Bill Brien Challenge Trophy against Johnsonville.

All seven matches are at the usual 2.45pm start time

After last week’s opposed training run against an overmatched Petone B, leaders Norths will find things a little more difficult tomorrow when they take on fifth-placed HOBM in the early game at Jerry Collins Stadium but should be warm favourites to keep their place at the top. The game of the round however should be just the one just down the road at Lyndhurst, with unbeaten pair Tawa and Ories squaring off, while the fourth unbeaten side – Petone A – welcome holders Marist St Pats to the Rec. There’s a midtable clash between Poneke and Pare-Plim at Kilbirnie, while across on the #3 ground there there’s an early 12.30pm start for OBU and Johnsonville. Either Petone B or Wainuiomata will get on the board when they meet in a battle of the cellar-dwellers at William Jones, while at Delaney Park Stokes Valley will look to put last week’s heartbreak behind them when they take on neighbours Avalon on their Old Timers Day at 2.45pm.

With Oriental-Rongotai on the bye this week, Norths and Petone each have the chance to join them on three wins from three outings. Petone have already done that, with injuries, illness, and absence leaving Paremata-Plimmerton to concede the result already. Norths will have to play, heading to the valley to take on Hutt Old Boys Marist at the Hutt Rec, with the other match tomorrow seeing Old Boys-University returning from the bye to host Poneke at Nairnville, while the round gets underway tonight under lights at Fraser Park with Avalon taking on Marist St Pats at 7.30pm.

The Paris Memorial Colts schedule is highlighted by the clash between Norths Blue and HOBM at Porirua Park. Elsewhere Petone host Tawa at the Rec, OBU Green and Johnsonville take to Kelburn Park, Poneke are at home against Norths White, and the Upper Hutt Rams finally get on the field when they welcome OBU Black to Maidstone. All five matches are 1pm kick-offs, with Wellington on the bye.

In the Under 85kg JC Bowl matches the Upper Hutt Rams travel down the valley to take on HOBM, the OBU Scallywags make the trip out to HW Shortt to face Eastbourne, Poneke and Wests meet at Kilbirnie, and the two teams that have had the bye so far, Avalon and Wellington, clash at Fraser Park with all matches at 2.45pm. MSP has the bye.

It’s school holidays so college rugby is on hiatus for this weekend and next, but there is one game being played with St Pats Silverstream taking on New Plymouth Boys High in their annual Traditional match. Kickoff is at 12pm.