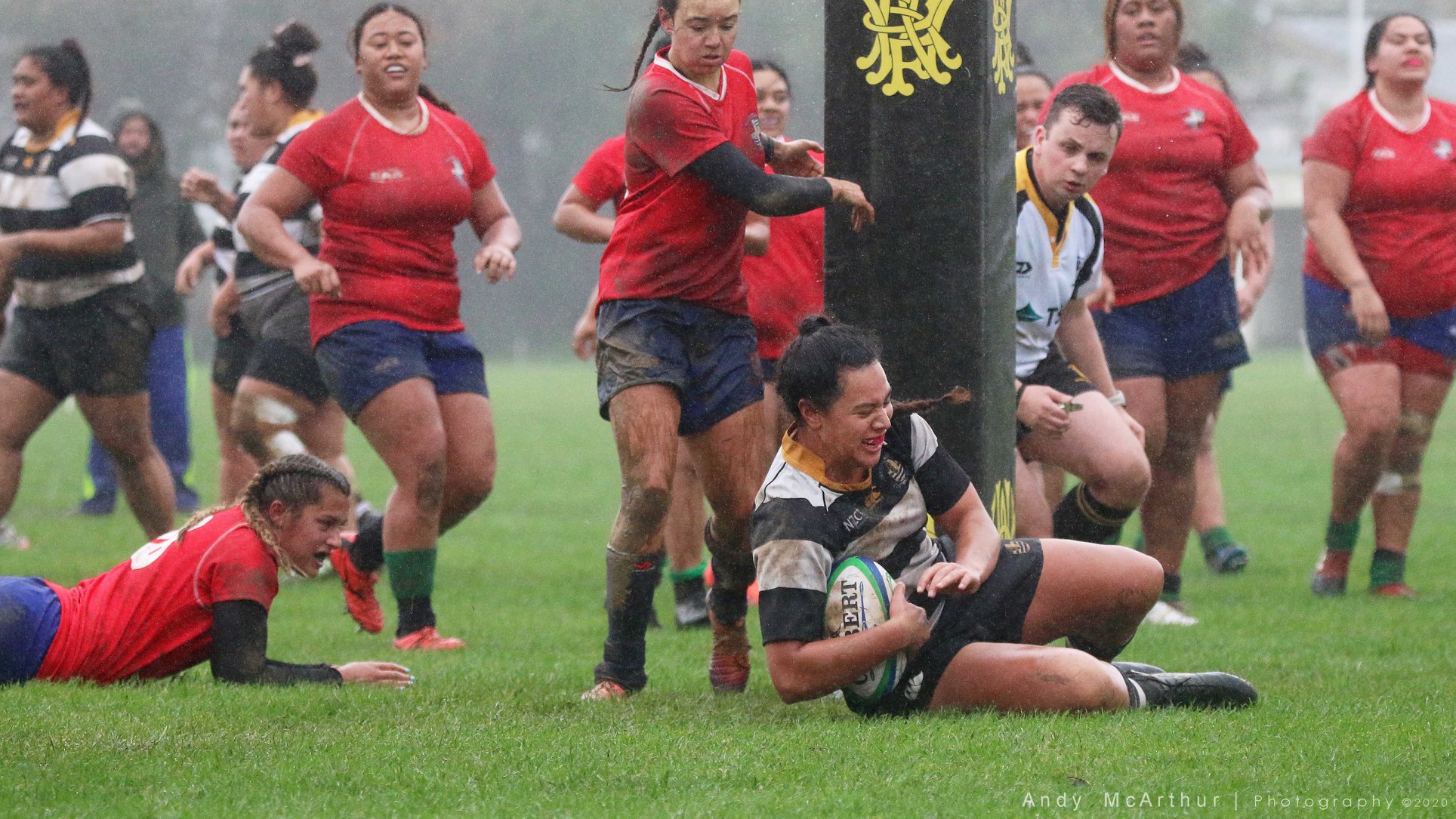 Above: Amanda Rasch scores in a splash against MSP recently. It is safe to say she kicked her own conversion, to add to her prolific form off the kicking tee.

Amanda Rasch is in rare form. The versatile Ories back has kicked 14 out of 16 goals in the opening two rounds of the Rebecca Liua’ana Trophy following a run of 20 consecutive goals for the Wellington Pride in the Farah Palmer Cup last year.

She scored a leading 252 points for Ories in 2019 as they completed the first and second round double.

In November she was a member of the Black Ferns Development XV that won the Oceania Rugby Women’s Championship in Fiji, trouncing Australia A (50-0), Fiji (53-0), and Papua New Guinea (131-0).

“It was a cool experience to play alongside players at the level. You can focus more on yourself as everyone knows what they’re doing. There’s a lot of analysis involved which helps you grow as a player,” Rasch reflected on the trip.

How far away is Rasch from breaking the ceiling and becoming a Black Fern?

“I’m not sure, but I can’t control that. I have to control what I can. Playing well week in and week out for Ories and stepping up in the Farah Palmer Cup is how I can get more exposure. I’m not too sure where I stand, but I trust God and his timing.” she responded.

Rasch covers multiple positions in the backline, but after discomfort in one area has begun to settle in all spots.

“I started in the midfield and used to hate going to ten, but I’ve learned to enjoy it. I’ve developed an identity in the position.”

Rasch shaped her rugby identity in 2012 when she was a member of the Go for Gold campaign, a New Zealand Rugby initiative designed to source talent for sevens at the 2016 Rio Olympics. Sharaka Baker, Tyler Nathan-Wong, Kayla McAlister, and Portia Woodman are all Black Ferns who emerged from the program.

“It was really cool to see so many athletics from different sports giving rugby a go. We did a few clinics around New Zealand, testing, and skill sessions. We played an exhibition match in the middle of day two at the Wellington Sevens. I moved up to Auckland to study and train at the Milliuenum Institute. It was a unique way to learn the sport,” Rasch reflected.

A shoulder injury and contractual obligations meant that Rasch didn’t actually play a full game until returning to the capital in 2014.

She has played 66 times for Ories and scored 712 points, including 49 tries. The most points she has scored in a game was 46 (2 tries, 18 conversions) against Tawa in 2015. Ories have won the  Tia Passi Memorial Cup and Izzy Ford Trophy three times.

Last Saturday Poneke defaulted to Ories who this week have a bye after two 54-0 victories to start the season against Marist St Pat’s and Hutt Old Boys Marist. Is the lack of competition a concern?

“It’s disappointing, but we’ll keep training. The game is growing and any attempts to help it grow further is something I encourage,” Rasch answered.

The Wellington Pride has grown steel in recent seasons. In 2018 they won promotion from the Championship to the Premiership and last year were semi-finalists in the top flight. However, Rasch insists Wellington was capable of more.

“We had a few good wins, but we didn’t reach our potential in the games against Auckland and Canterbury and that was disappointing. We looked like a totally different team against them and there were a lot of factors as to why. I’m really excited about the FPC and hoping to do better than last year,” she observed.

Rasch is a regional advisor for Sport Wellington working in the community to get people engaged in sport. Despite the coronavirus, she believes the desire to participate remains high.

Last week it was announced New Zealand will share hosting rights with Australia for the 2023 FIFA Football World Cup. Rasch started her sporting life as a footballer at Miramar Rangers and then played for Karori and the Wellington National Women’s League side for a couple of years, making the Football Ferns U20 squad.

At Wellington East Girls’ College, she was a member of the National championship-winning team. Any prospect of a return to the round-ball code?

“I don’t think so. I’m really enjoying my rugby at the moment. I’d like to play indoor football again, but rugby is my thing for now.”

There was a short Black Ferns camp this week which Jackie Patea- Fereti, Monica Tagoai, and Marcelle Parkes attended. Ayesha Leti-I’iga was chosen to but was granted leave.

Below: Almost a year ago now, Rasch and teammates celebrate Ories’ 2019 title win.