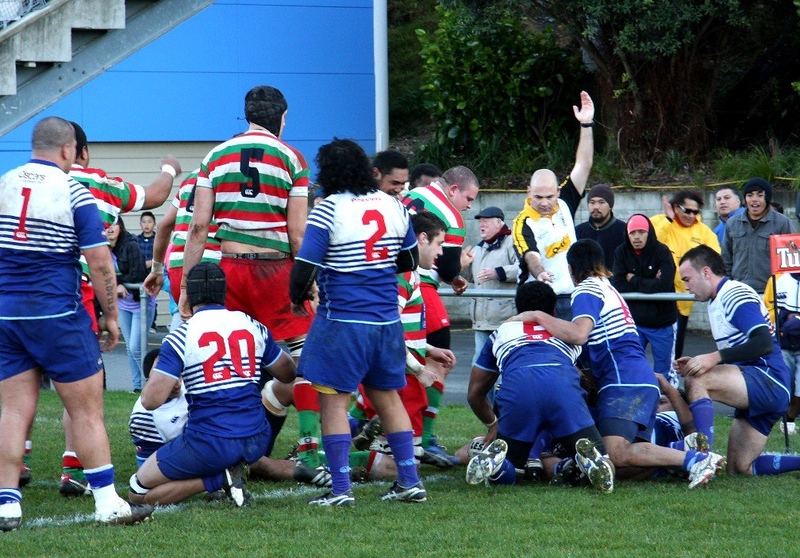 Above: This week in 2010 Norths and HOBM contested a dramatic 23-23 draw. A decade on, these two teams meet this coming weekend at Jerry Collins Stadium in round 4 of the 2020 Swindale Shield.

Some selected Wellington club rugby memories from this week in history.

1957: Defending Jubilee Cup champions Petone are pushed hard by St Pat’s Old Boys, winning 13-6. An injury hit University cruise to victory over Marist Old Boys, 20-6. These wins keep Petone and University four points clear at the top of the table after 11 rounds. Petone go on to defend their title this season.

1973: Horrendous weather forces the cancellation of all Senior club rugby in Wellington , putting the competition back a week at the end of the season.

2002: Norths show superior hunger and commitment to steal a 14-11 victory off competition leaders MSP at Porirua Park. MSP took an 8-0 lead into halftime, but, with the win, Norths storm to victory with tries to flanker Tui Meavao and wing Cassidy Godinet after  a clean break by first five-eighth Rob Aloe. Elsewhere, Ma’a Nonu scores his 8th try of the season in Ories’ 34-17 win over Upper Hutt to them move to third after five rounds of the Jubilee Cup.

2013: Old Boys University beat red-hot Tawa 31-28 in the Nairnville Park mud. After trailing 21-8 at halftime, OBU come roaring back with the wind in their favour to tie the score up to 21-21 midway through the second half and then 28-28 with the clock winding down. Player of the match, Wellington and Highlanders first five-eighth Lima Sopoaga then kicks the winner at the end for the Billy Goats. Tawa goes on to beat OBU in their semi-final three weeks later.

1956: Leading contenders Petone are given a fright by the Ivan Vodanovich -led Marist Old Boys side, before racing clear toward the end and winning 22-3. For Petone, former All Black Bob Scott and new All Black Don McIntosh are outstanding figures, while New Zealand Maori wing T.PKatene scores a hat-trick. It’s 3-3 at halftime, but Petone are a different side in the second spell. They play some wonderful rugby over the final 20 minutes, showing the form that is to carry them to the Jubilee Cup title several weeks from now.

1984: MSP let slip a 15-0 halftime lead to lose to Petone 16-15. In a heart-stopping finish, Petone first five-eighth Murray Blandford pots a dropped goal with only a few minutes left. Blandford has previously scored a 60th minute try off a charge-down to get Petone to 13-15. Elsewhere, Grant Griffith boots seven penalties in Poneke’s 21-0 win over Wellington.

1978: MSP crush an understrength Petone 38-9 to effectively end Petone’s 1978 Jubilee Cup challenge, while the Wellington Axemen overrun University 29-0 in these two third round Jubilee Cup clashes. MSP and Wellington go on to share the title.

1995: A try in the last second to halfback Derek Stone by MSP to give them a 28-28 draw with Harlequins has seemingly shut Harlequins out of the playoffs. But when Johnsonville captain Kerry Whale scores a hat-trick to beat Wellington 29-12, Harlequins seal fourth place ahead of the Axemen.

2000: Poneke upset previously unbeaten MSP 19-13 to propel them into the top four with one round remaining. Poneke’s forwards steamroll their opposites and secure victory by scoring off a lineout try in the corner. Elsewhere, Petone lead after beating Ories 37-3.

1938: Form is turned on its head when previous leaders Poneke are upset by the previous winless Johnsonville 9-6. The loss spells the end of Poneke’s 1938 Jubilee Cup challenge, Petone winning the title.

1977: Athletic celebrate an upset 15-14 win over Petone, after fullback Brian Cederwall kicks the winning goal with 10 minutes left.  Also on this day, minnows Onslow stun MSP 7-3. Athletic go on to win their last ever Jubilee Cup, before amalgamating with Onslow in 1982 to form Wests.

1988: MSP win away at Petone for the first time in 17 years. Peter O’Shaughnessy kicking 19 points and wing Damien O’Brien scoring two tries in the 31-18 victory. Elsewhere, University first five-eighth Mike Heron scores all the points in the students’ 17-12 win over Poneke.

1971: Petone win the Swindale Shield for the third straight year, beating MSP 13-6, while Graham Wallis (University) and Doug Frogatt (Wellington) star in wins over Eastbourne and Poneke respectively. Petone, University and Wellington are the leading three teams at the end of the first round.

1999: Western Suburbs beat MSP 19-14 in a top-of-the-table clash at Rugby League Park – winning courtesy of a penalty that referee Lyndon Bray awards them midway through the second half. MSP wing Lome Fa’atau scores the only try of the game. These two teams go on to contest the final three weeks from now.

2010: A dramatic 23-23 draw between Northern United and Hutt Old Boys Marist has creates a logjam at the top of the points table after a month of round-robin rugby, with Norths HOBM, MSP and  Poneke all bunched together. Norths fly to a 10-0 lead, HOBM comes back to lead 12-10, Sinoti Sinoti scores his second try to give Norths a 20-12 lead, which becomes 23-20, and then HOBM first five-eighth Dan Snee kicks a death-knock equaliser to end a dizzy match.

1964: Marist hang on by the barest of threads to beat Wellington 9-8 in the main game at Athletic Park and retain its joint championship lead with University. In a desperate finish, Wellington bombards Marist’s line, but the latter holds on to win a compelling match.

1970: A week after missing out to first round winners Petone in the Swindale Shield in the club’s centenary year, the  Graham Williams-captained Wellington Axemen open their Jubilee Cup campaign with a 14-6 win over Naenae. However, Petone, with a Man of the Match performance from prop Gareth Head and a top game further out by second five-eighth Richard Cleland, also win their opener. The Villagers beat Athletic 25-0. Petone goes on to win the Jubilee Cup.

1930: “Rugby Surprise: Hutt soundly trounces Petone…the 5,000 spectators who attended Athletic Park were treated to exhilarating display by the Hutt fifteen.” [The Dominion]. Hutt win this encounter 22-8, a match between big guns Petone, led by All Blacks five-eighth Mark Nicholls, and the newly promoted Hutt side, featuring All Blacks midfielder, Bert Cooke who has come to play in Wellington at the start of this season. Hutt finish third in 1930, while Petone win their first Jubilee Cup.

1980: Petone and Poneke draw 18-18 in this round three clash, while MSP over runs Wellington 30-0 at Athletic Park, scoring seven tries but converting just one. These two results put MSP on the top of the table ahead of a showdown with Petone for the title in a month’s time.

2008: A late converted try to openside flanker Pau Halafihi carries Oriental-Rongtotai to a sensational 20-16 win over Poneke to keep their Jubilee Cup semi-final chances alive with two rounds to play. Orie had led 13-0 at halftime but Poneke came back to seemingly nab victory. In the round’s other results, Petone defeat HOBM 25-0, Norths beat Old Boys-University 45-0 at Porirua Park and MSP beat Upper Hutt 34-0 to become the first team to qualify for the top four, with two rounds to play. MSP and North will later meet in the final.