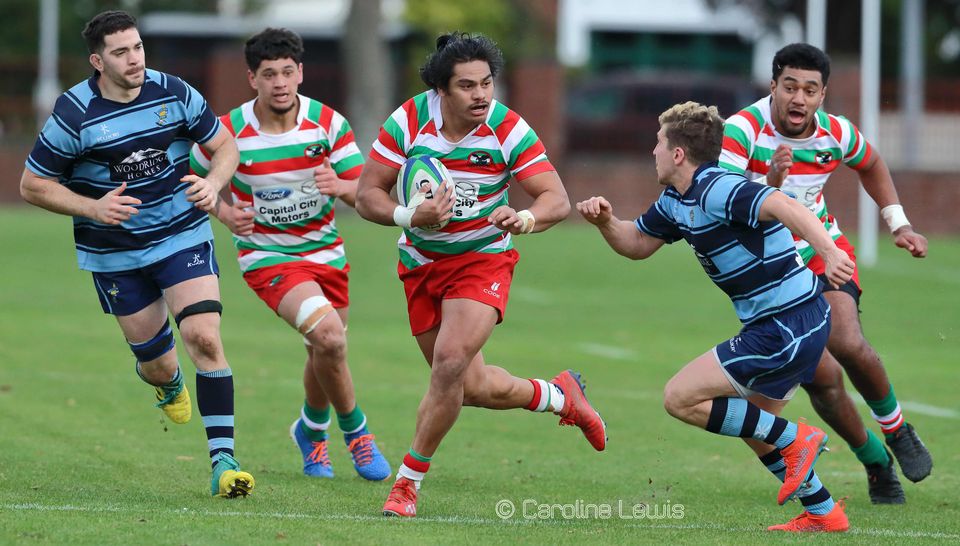 Above: Fereti Soloa was part of a potent HOBM backline that was too much of a handful for Johnsonville at the Hutt Rec. The Eagles beat the Hawks 59-5.

There were close wins for Tawa and Oriental-Rongotai respectively in the Swindale Shield today, while Northern United’s top three men’s sides all had dominant wins in their competitions, in week three of Wellington club rugby.

At Kilbirnie Park, Tawa won the inaugural Kevin Carmichael Cup by pipping Poneke 17-15, with the home team missing a penalty 90 seconds from the end that would have won them the game.

Trailing by two points and with the clock winding down, Poneke broke up field and were awarded a penalty in a handy kicking position but Poneke fullback Isaac Moe Jenkins sent the attempt wide and Tawa held on to win their third straight win of the Premier competition.

With new Hurricane Simon Hickey at 10, Poneke took a 10-7 lead into halftime playing into the wind. Tawa opened the scoring through first five Luke Cummings, but Poneke replied with a try to left wing Suitulala Filemoni and a Hickey penalty. Tawa speedster Maui Wallace opened the second half with what proved a decisive intercept try, but once more Poneke replied with a try of their own with Filemoni bagging a brace. Tawa halfback Kemara Hauti-Parapara then kicked the match-winning penalty.

The other five Swindale Shield fixtures were generally one-sided, including Norths 77-0 win over the Wellington Axemen at Jerry Collins Stadium, that was one of steel and polish.

As well as the Premiers’ overwhelming win, the Northern United Premier Reserves made it three straight bonus point victories with a 122-7 slaying of the Petone Brotherhood (Petone’s second team in the Harper Lock Shield grade) and their Colts opened their win column with a 113-7 toppling of the Wellington Axemen Colts. Rounding out a successful day for the club, the Norths Women’s team beat Paremata-Plimmerton 39-5.

In the main game at Porirua, Wellington lost starting tighthead Cameron Roseingrave and flankers Sam Gard’ner and Max Allen within the hour as the score ballooned from 27-0 at halftime to nearly a run a minute.

Norths crushed the Axemen in the scrums and were lethal when pouncing on turnovers from the visitors.

Kienan Higgins, a constant source of creativity, opened the scoring, before Wellington earnestly camped inside the Norths 22. A fumble and breakout try to Losi Filipo at the opposite end was a brutal blow. Filipo had a double before the break, but Norths could have had many more had it not been for some careless passing.

Norths emptied the bench with half an hour remaining and the energy of the reserves was palpable. Malachai Unasa bagged a hat-trick with three well-taken tries while Adrian Seumanufagi was just as lively as starting halfback Esi Komaisavai, both appeared on the scoresheet. Norths flanker Bruce Kauika-Petersen was in damaging form and deserved his try.

At the Hutt Rec, the Eagles leapt to a 28-0 lead after 23 minutes and it was game over. They extended this to 40-0 by halftime and then 47-0 soon after the break when second five-eighth Brandyn Laursen completed his hat-trick. The next 20 minutes was mostly scrappy although Johnsonville did regroup somewhat and captain and centre Andy Ellis scored their only try from a cheeky intercept in midfield 15 minutes from the end. But Laursen had the last say, scoring his fourth try of the match.

The Eagles launched off a dominant set-piece and a backline bristling with attack, starting with Pakai Turia at first five-eighth and ending with Hurricane Salesi Rayasi gliding into the line at fullback. Their first four tries were scored from set-pieces, two of their own and two off Johnsonville’s ball, which included a 70 metre intercept try off a Johnsonville scrum and a lineout steal and Turia slicing through to link with halfback Waylon Tuhoro-Robinson on his inside.

Centre Sam Reid bagged a hat-trick of tries for Old Boys University in their 50-point win over Paremata-Plimmerton.

MSP were made to work hard for their win over Wainuiomata at Evans Bay Park for the Rona-Morrissey Cup, with their three tries being scored by forwards, Tom Horan, Josh T00maga and Tyrone Thompson.

The game of the day was at the Hutt Rec, where Hutt Old Boys Marist got up over their city cousins Marist St Pat’s by 24-19.

The game was tit-for-tat after HOBM opened the scoring after a period of early dominance but MSP replied when first-five Cheyne Copeland linked with second-five Monica Tagoai for their first try. On the stroke of halftime, HOBM scored their second try with wing Sarahcen Oliver evading three defenders and the corner flag to put them up 12-5.

HOBM lost a player to the sin-bin and MSP replied with a steamrolling forwards try that levelled the scores to 12-12.

HOBM utilised the blindside on attack well, and a lovely shortside move off a scrum saw flyhalf Rachel Peleseuma link with her wing Ateca Rainforth for a try in the corner and a 17-12 lead for the home team.MSP struck back with a broken field try to halfback Taimane Siaosi and they now led 19-17. With just a few minutes to play, HOBM scored the match winner through replacement loose forward Gene Solia-Gibb after a scrum inside the 22. There were some anxious moments at the end as the Eagles ended the match pressed on defence but held MSP out.

On the other side of the river, Petone burst Avalon’s early season bubble with a 51-0 win, with Black Ferns lock Jackie Patea-Fereti scoring two tries and halfback Milly Mackey scoring three, to go with her five last week.

Norths returned from their week off to beat Paremata-Plimmerton 39-5.

The fourth match was decided on Thursday night, with Poneke defaulting to Oriental-Rongotai.

A day of big scorelines in the second-tier, none larger than leaders Norths massive 122-7 win over Petone B (as above). The Villager’s A side had much better fortune, dispatching Avalon 54-13, with MSP – 69-10 over Wainuiomata – and OBU, 43-8 over Pare-Plim, the other big winners. Much closer were events at the Hutt Rec where HOBM beat Johnsonville 34-10, and at Kilbirnie Park where Tawa saw off home side Poneke 32-17.

The closest game of the day however was the last one, as Ories prevailed by a single point at Delaney Park against Stokes Valley in a 14-13 arm wrestle. Ories won the match with a last-minute try.

The final four sides for this year’s Premiership have been found, with Tawa and Mana earning their return to the top flight. Tawa were untroubled in beating Kapiti 60-5, while Mana tipped over Hut International 19-12 and earned the former powerhouse a return after a nearly a decade on the outer, while HIBS drop out for the first time since 2011. Wairarapa College had to survive a scare to return as well, edging out a gallant Paraparaumu College side bidding to make the Premier grade for the first time by 22-17.

In the final Top 4 matches Silverstream completed a clean sweep in beating Scots 36-17 while Town topped Rongotai 55-5 putting both schools as firm favourites for the Premiership season. Wellington College and St Bernard’s took the week off after booking their places last Saturday.

In the matches to find the balance of Premier 2, the Silverstream 2nds trounced Taita 71-12, Upper Hutt were more decisive in thumping Hutt Balley HS 91-0, and Wainuiomata beat the Rongotai 2nds 38-7.

So the Premiership this year will consist of Silverstream, Town, Scots, Rongotai, Wellington Coll, St Bernards, Wairarapa, Aotea, Tawa, and Mana; while Premier 2 will be nine teams; HIBS, Kapiti, Porirua, Paraparaumu, Upper Hutt, Wainuiomata, and the Town, Wellington Coll, and Silverstream 2nd XVs. Bishop Viard was also eligible, but Club Rugby understands that they have elected to play in Premier 3