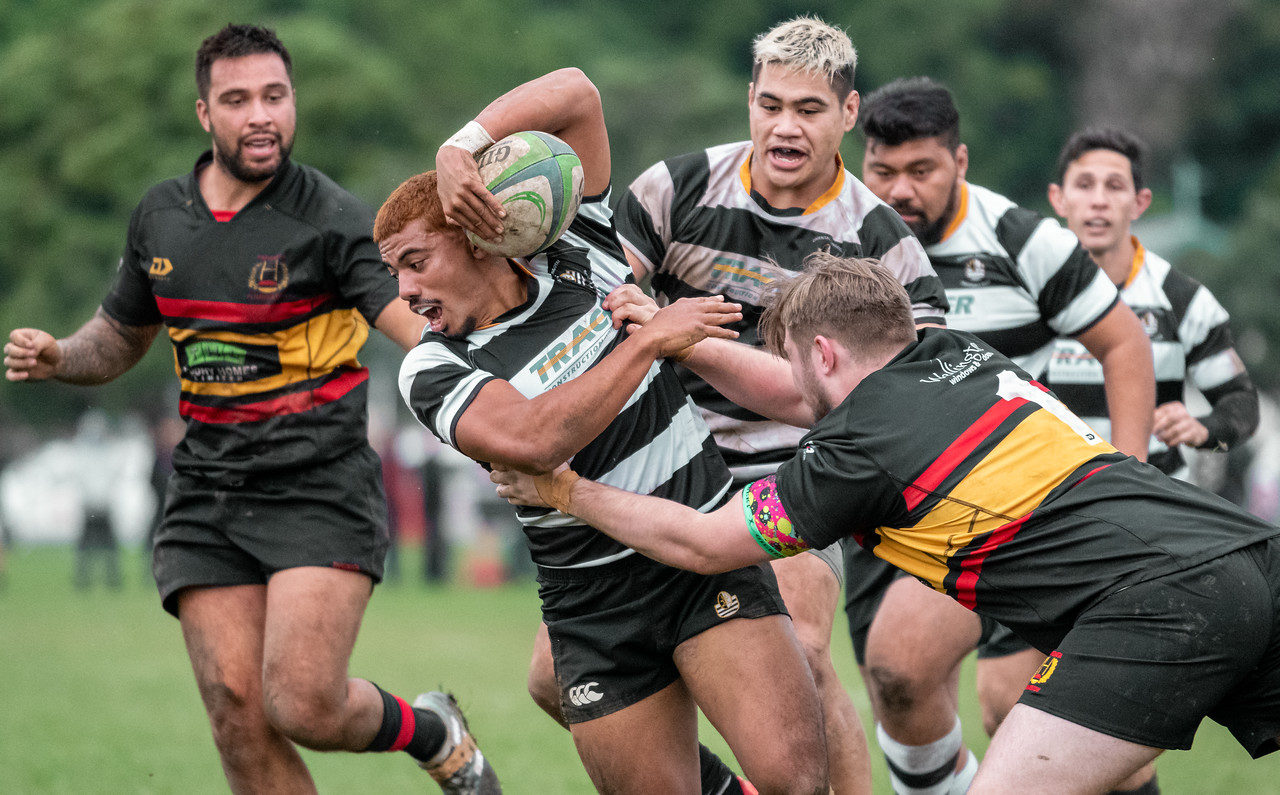 Ories travel to play the Upper Hutt Rams, while Paremata-Plimmerton are at home to Old Boys University in Swindale Shield third round matches tomorrow.

UPDATED: After the wintriest week of the season so far, tomorrow’s forecast looks promising with clear and cool conditions in the offing.  That should allow for some good running rugby, especially since most of the region’s better draining grounds are in use tomorrow. At the Premier level the current leaders have a chance to make a break on the rest of the field,  while down the table a couple of clubs need to get moving.

After two weeks, just four teams have two-from-two records. None of them meet this week, so each have a chance to extend their advantage but face challenges of varying degrees.

Sitting top (on points difference) are Tawa, who after dispatching Avalon last week venture into the city itself for the first time as they head to Kilbirnie Park to take on Poneke. The hosts are on their turf for the first time this year and opened their account with a hard-fought win over Johnsonville but know they will need to be better than they have been in the opening fortnight tomorrow against a Tawa side that has been rather ruthless in their matches to date. Poneke get a boost with the returns of both Galu Taufale and Cole Stewart, and the addition of new Hurricanes signing Simon Hickey at first-five. Tawa make a raft of changes, with veteran hooker Matt Treeby making his first start since 2018 and Kalim Kelemete and Ryan Preston forming their midfield combination, while on the bench the well-travelled Jeff Makepelu is in line to make his first Premier appearance for Tawa since 2014.

They will also inaugurate an inter-club trophy tomorrow, the Kevin Carmichael Cup. Carmichael began his senior career at Tawa – then playing outside of the top grade – before moving to Poneke where he played over 100 games. He then returned to Tawa, racking up another 120 games before moving into coaching, including taking the helm of their Premiers, and helped bring sponsors onboard. He has also been honoured with Life Membership by Tawa.

Also playing their first game at home are the other joint-leaders in Marist St Pat’s, making it handy for people to catch both games at once. The visitors to Evans Bay are Wainuiomata, who’ll be buoyed by their Houdini act last Saturday. MSP are in ominous form early on, and tomorrow there’s the added incentive prop Vince Sakaria joining the ranks of MSP centurions. They have several changes from the side that beat Upper Hutt, but retain the services of Hurricanes halfback Jonathan Taumateine, and Andrew Wells makes his season debut at the back for his 99th outing. Wainuiomata make just two changes, both in the backline as they start the same front eight for the third successive week. Trei Mu’s late heroics earns him a start, with veteran Isaiah Mamea replacing Hurricane Peter Umaga-Jensen in midfield.

They’ll also contest their Rona-Morrisey Trophy which honours Cliff Rona and John Morrisey who have ties to both clubs. It’s held by MSP after their 44-19 win in 2018, with the two not meeting at all last year.

One point behind are Hutt Old Boys Marist, and after two trips into the city already are also at home where they’ll host Johnsonville at the Hutt Rec. The Eagles have opted to give their side some rotation tomorrow with Enoka Fonoti, Freddie Sunia, and Mika Alaifatu getting starts in the forwards, their backline sees the return of long-serving winger Fereti Soloa to the starting side along with both Rayasi brothers, and others getting an opportunity from the bench. The Hawks will be combative up front with Ha’amea Ahio and PJ Sheck, while arrivals Ivan Vaisagote, Andy Ellis – who moves to centre – and Irish duo Marc Sutton and Niall Delahunt have given their backline some stability.

Also making a quick start are Old Boys-University, who leave Nairnville Park for the first time this season to venture north to take on Paremata-Plimmerton at Ngati Toa Domain. After two dominant displays over Poneke and Norths, the Goats will be warm favourites against the side currently sitting bottom and have opted to give regular starters Jonathan Fuimaono, Caleb Delany, and Paddy Carter a mini-break by putting them on the bench. The home side are dealing with a raft of injuries, but their new-found depth means they can still name a side that has some of their usuals on the bench as well. Stu Simonsen starts against the club he played over 100 times for, and No.8-turned-prop Peni Taupau starts in his 50th outing for the Hammerheads.

One match where underfoot conditions definitely won’t be an issue is at Fraser Park, with Avalon and Petone taking to the artificial turf. After a pair of losses away from home including a limp effort last weekend at Tawa, the Wolves will be keen to make a good impression, and tomorrow will have arguably their most well-known name with Asafo Aumua fronting for them and joining brothers Sefo and Chris in Avalon colours for the first time. The visitors will be out to atone for last week’s loss to Wainuiomata, where their inexplicable failure to simply ground the ball in their in-goal cost them the game. Injuries are also an issue, with Ryan Imrie and Jacob Gooch the latest additions to that list, so Kaleb Sinclair makes his debut as their third hooker in as many weeks and Josh Southall his first start with Jack Ross taking on captaincy duties. They’re also without Kaliopasi Uluilakepa for family reasons. The Morgan Family Trophy played for between the two teams will also be on the line, which Petone retained last year with a 91-5 trouncing in the penultimate round of the Swindale.

Out at Maidstone Park and it’s new billiard-table like field the Upper Hutt Rams and Oriental-Rongotai clash. Both have matching one-win, one-loss records but were on the different ends of score lines last week and will want to repeat or redress as the case may be, though as at time of publication we didn’t have either teams lineup. They too have an inter-club trophy in play, with their Bob Lendrum Cup honouring the longtime Ories player, captain, and coach who later settled in Upper Hutt after a successful stint with Fiji. The Magpies hold it after their 27-18 win last year.

The final game of this preview is at Jerry Collins Stadium, where Norths find themselves looking up the table at everyone bar their northern neighbours after two losses to start the year where they looked anything but defending champions. They’ll look to kick-start their season against Wellington, but the Axemen have proven in recent times to not just be stubborn but capable of springing an upset of their own. Norths haven’t panicked in their selection as they try to find a working combination, bringing back captain Parekura Lalaga, Gerard Faitotoa, and Johnny Tealaga. Wellington’s changes include Sam Gard’ner back in the starting side, and Isaac Bracewell moves back to halfback.

All seven matches are at the usual 2.45pm start time.

If early season form is any guide, then some of the leaders have straightforward assignments this week while others might find it a bit trickier.

Norths should be one of the former, hosting the Petone Brotherhood in the early game at Jerry Collins Stadium, while Tawa and Poneke meet in a battle of two unbeaten sides at Kilbirnie. Petone will be favourites away at Avalon, while Ories will be in for a physical encounter if nothing else at Stokes Valley. In the remaining fixtures the clashes between HOBM and Johnsonville at the Hutt Rec and Pare-Plim and OBU at Ngati Toa have the potential to be close affairs, while MSP should be too strong for Wainuiomata at Evans Bay.

All matches are at 1pm bar the game at Delaney which is a 2.45pm start.

A couple of intriguing matches in this week’s women’s draw. Surprise early season package Avalon have a chance to further their credentials when they take on valley rivals Petone at the Rec, while on the other side of the river the two Marist sides clash at the Hutt Rec with Hutt Old Boys Marist hosting Marist St Pats. The third match is the northern derby between Paremata-Plimmerton and Norths at Ngati Toa, though the last has seen Poneke default to Ories, meaning Ories midfielder Fa’asua Makisi will have to wait a couple of weeks to play her 100th game. Old Boys-University have the bye.

The three remaining matches are at the usual 11.30 kickoff.

It’s the last round of matches before the season proper gets underway next week. The Top 4 play the final games of their preseason round-robin with Scots hosting Silverstream and Rongotai taking on Town.

Beyond that, the final four places to join them and Wellington College and St Bernard’s in this year’s Premiership will be found. All four of last year’s teams have the chance to return, but face stiff opposition to do so; Hutt International head to a resurgent Mana while on the other side of Porirua Harbour neighbours Aotea and Porirua meet, and just down the road a little further Tawa host Kapiti with all five above matches at 2.30pm. The fourth match is at 1pm, where Paraparaumu make the haul across to Masterton to take on Wairarapa College.

The losers of those matches will enter Premier 2 along with the Town and Wellington College 2nd XV’s who qualified last week, along with more to be found from the next bracket. The Silverstream and Rongotai 2nd XV’s host Taita and Wainuiomata respectively at 1pm, and Upper Hutt taking on Hutt Valley HS at 2.30pm. One team already through are Bishop Viard, with Onslow unable to field a team this week.

The Colts field has been further thinned out with the withdrawal of Wainuiomata, so following MSP’s exit last week just 11 teams remain. This week’s games have HOBM hosting Johnsonville at the Hutt Rec, OBU Black and Petone meet at Nairnville, and Poneke and Tawa clash at Kilbirnie. The remaining two games are at Porirua Park with Norths Blue against Wellington on the #2 ground, while up top on #3 Norths White line up against OBU Green.  After not playing last week owing to MSP’s withdrawal the Upper Hutt Rams again have the week off, but this time with their scheduled bye.

All five matches are at 1pm.

The final grade in this preview are the lightweights. Three of the matches are in the city with Poneke and the OBU Scallywags taking to Kilbirnie Park, Wellington make their season debut at Hataitai against Eastbourne, and the Wests Roosters and HOBM take to the Ian Galloway cage. The fourth is all the way out at Maoribank, with the Upper Hutt Rams hosting MSP. All four matches are at 2.45pm, with Avalon having this week’s bye.