Skip to content
You are here
Home > Club Rugby > Aisle be Back: Hurricanes v Chiefs this Sunday 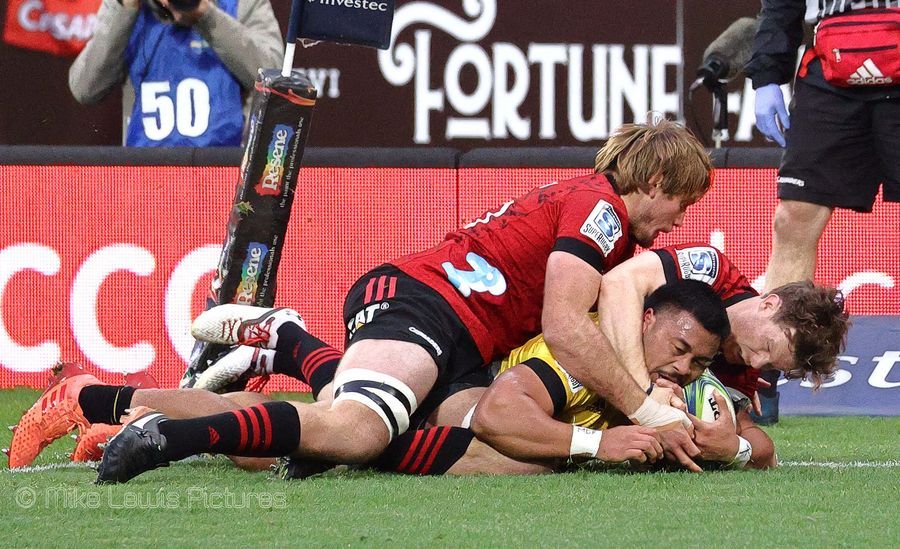 Avalon’s Asafo Aumua crosses for the Hurricanes at Wellington Stadium in their previous match.

The Blues have probably heard that line in the last week. Beauden Barrett, the player on which to build a dynasty, is off to Japan.

Admittedly not for a whole year. He’ll just miss the next season of Super Rugby (and good luck if you know what that will actually consist of). So the Blues will have Beaudy for something approaching a season and a bit.  Oh well better some than never.

I can’t blame Barrett for maximising his dollar right now. He probably figures that Super Rugby will not be returning as we have known it, if at all. A brave person would wager that COVID-19 will be sorted by the start of 2021 to the degree that a comp spanning three nations and a ton of air travel could be made viable.

I suspect that like a few struggling businesses, the virus will be the ultimate camouflage for pulling out the spikes of the tent now rather than later.

As for the Canes, well, they don’t really have to care do they about the Blues first-five. Maybe some wry amusement.

Talking of Auckland first-fives, the Wiz goes in the same week.  The Hurricanes management are gutted but not enough to keep him on, so either we believe its economics, or somewhere the magic has not been there between Carlos and the crew.

Then again we have just signed Simon Hickey. Yes, I know you had to google him. He’s probably trending just because of Canes fans searching the web. He’s making a wise move, given that UK rugby is not a sure bet for Kiwi players this next year.

Somewhere in this all, there is a game of rugby to follow this Sunday. The dance of the desperate, especially for our northern hosts.

The Canes can’t take much solace in that though. Two and zip and not setting the world on fire, they really have to win this one.

Trouble is the Chiefs are even more in a bind. Should make for a no-holds barred battle, so lets pray for some good afternoon weather and not too much of a home advantage.

Apparently the resumption of the Bundesliga has allowed an interesting experiment. The games are being played in empty stadiums.

Now we all know about home advantage, and it turns out that so far, its disappearing to a large degree if there is no crowd to cheer you on.

Theories range to the players not turning up to quite the same extent because there is no crowd to feed off, to the ref not being unduly swayed by the baying of the home team supporters.

One thing it doesn’t suggest is that the quality of play declines.

Interesting stuff really and in case you need reminding, turning up at your home matches really can make a difference.

Wellington Lions to play for Ranfurly Shield on Sunday