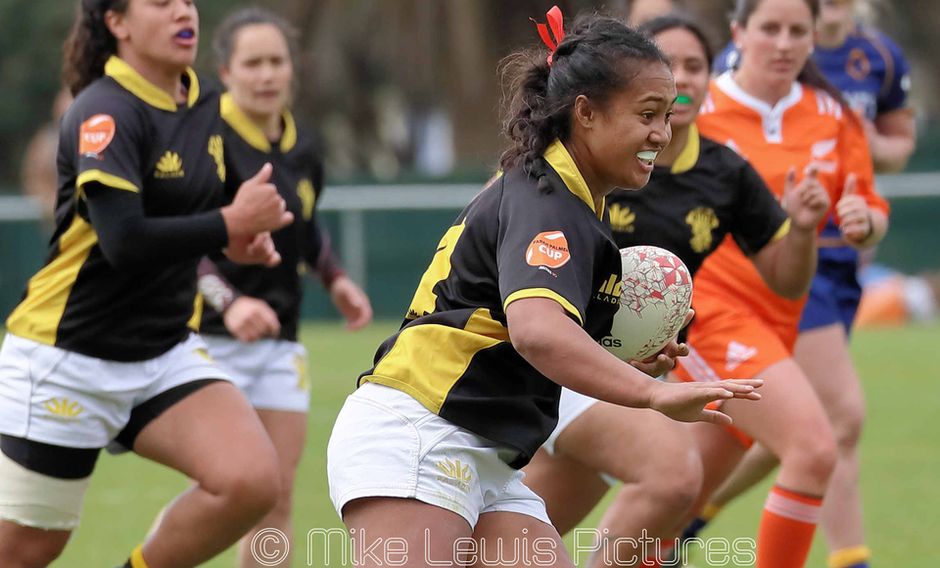 Monica Tagoai is back in business. On Saturday the Black Ferns centre and wing scored two tries for Marist St Pat’s in a 48-24 victory over Paremata-Plimmerton in the second round of the Rebecca Liua’ana Trophy.

It’s only her second game back after fracturing her tibia and fibula in a pre-season match against Ories a year ago.

Ories are reigning champions and thrashed MSP 54-0 in the first round. The Ories fixture appears to be a cursed one for the Doolans.

“Last year we had three major injuries when we played them,” Tagoai explained.

“This year I thought we’d made it through without any serious dramas until I logged on to our group chat and discovered we had five major injuries. It always happens against Ories.”

A torn muscle in the shoulder in addition to a fractured pinky and thumb are just some of the ailments carried by members of the MSP squad, but Tagoai is remaining positive.

“We have four experienced players and heaps of youngsters, some learning the game for the first time,” she said

“When you look at Ories they’ve grown and developed together and that’s what we’re missing a bit at MSP.”

“Club rugby is about playing for your family and alongside girls you might never get to play with in the future. Sometimes the score doesn’t matter, but making sure the girls take something out of every game is vital.”

The oldest of four siblings, Tagoai was born in Samoa and migrated to New Zealand with her family aged three.

Despite being surrounded by rugby enthusiasts it wasn’t until high school she really flourished in the sport. She was a member of the ground-breaking St Mary’s College program which rose from local obscurity to national prominence in 12 euphoric months.

“We were a bunch of netballers who played rugby for fun, but our coaches insisted we could go far. In 2015 we won the Wellington 12-aside competition and Condor Sevens, ” Tagoai recalled.

“In 2016 we won the Hurricanes title and finished second in New Zealand which was a proud effort at our first Nationals.”

“Winning the National Condor Sevens in December was the pinnacle. I scored a try in the final and was selected in the tournament team which opened up a lot of opportunities for me.”

That St Mary’s team also contained sisters Dhys and Lyric Faleafaga who were members of the Black Ferns Sevens squad as well as Renee Savaiinaea and Ainsleyanna Puleiata, both leading netballers with Savaiinaea in the current Pulse team.

The coaches were Ories pair Tuga Mativa and his best friend, All Black Ardie Savea.

“Tuga was so driven he trained us like men. His discipline, patience, and knowledge were massive. There are not many men his age that would have the time, faith, or interest in helping out stroppy teenage girls, but he did,” Tagoai acclaimed.

“When he invited Ardie along we couldn’t believe it. Ardie gave us expert tips about defence and the ruck and he was always laughing.”

Tagoai made her Wellington Pride debut while still at school in a 25-17 win against Waikato in 2016.

In 2017 she featured in a handful of games scoring her first try in a 41-19 thrashing of Otago.

The 2018 season would be groundbreaking for Wellington. The Pride scored a province record 449 points and 69 tries en route to winning the championship, earning promotion back to the Premiership of the Farah Palmer Cup.

Tagoai scored two tries in the shock 43-38 win over eventual Premiership champions Canterbury and bagged another brace in the 57-5 mauling of Otago in the Championship final.

The highest accolade followed in November when she was selected for the Black Ferns earning three tests on the November tour of the USA and France. She debuted off the bench against the USA in the historic Soldier Field test in Chicago.

“I was so proud and nervous on my debut. All I could think about was my family and friends and all the sacrifices they’ve made to help me get to where I am,” Tagoai reflected.

“When I got on the field all I wanted to do was get the first touch out of the way. It was extra special to make my debut with my best friend Ayesha Leti-I’iga.”

“Doing my homework, going a hundred percent at training, and listening to the coaches will help me keep my black jersey.”

A scorer of 31 tries in 31 games for MSP she is an occasional goal kicker and once scored an impressive 39 points (5 tries, 7 conversions) against Upper Hutt in 2017.

This Saturday MSP travels to the Hutt Rec to take on Hutt Old Boys Marist.

Below: some great work on the right wing and the try assist by Tagoai in this try in the 2018 Championship Women’s final.

Great try to the Wellington Pride in their Women's NPC Championship #win over Otago. This try made it 24-5 at halftime and they went on to win 57-5.

Below: Pleading for a towel while playing for MSP in their opening round loss to Ories in the rain two weeks ago.