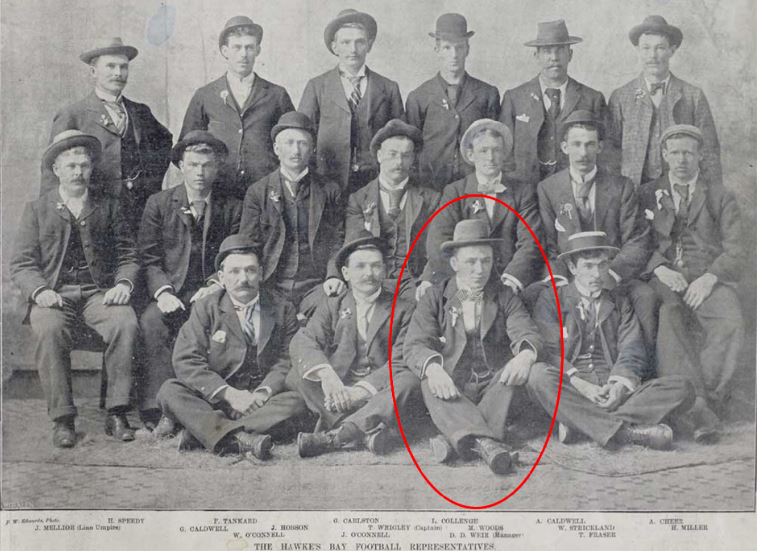 Above: Daniel Weir – circled – Manager of the Hawke’s Bay RFU representative team of 1899.

D. (Daniel Duncan) Weir (known as “Danie”) was perhaps Wellington Rugby’s most notable casualty of the influenza pandemic that swept across New Zealand in late 1918. While the rugby season had long-ended, the President of the Wellington Union, the Chairman of the union’s Management Committee (and former member of the Management Committee of the New Zealand Rugby Union) succumbed to the ravages of the virus, dying of pneumonia at St. John’s Hospital (a temporary hospital created on Willis Street as a result of the pandemic), on 21 November of that year.

As was commented in the press at the time, “the death of D. D. Weir through an attack of influenza has removed one of the outstanding figures in the government of Rugby football in the Dominion”. He was one of the strongest supporters of the formation of the New Zealand Rugby Union, “a remarkable personality – one with a persuasiveness that convinced people sometimes against their will that the course he suggested was the right one to pursue”. Weir died in the prime of his short life, aged 41 years and is buried in Karori Cemetery. His grave lies among the broken tombstones and overgrown pine trees on the clay bank overlooking the Western Suburbs Rugby Football Club.

MSP, Norths and HOBM pile on the points in seventh round